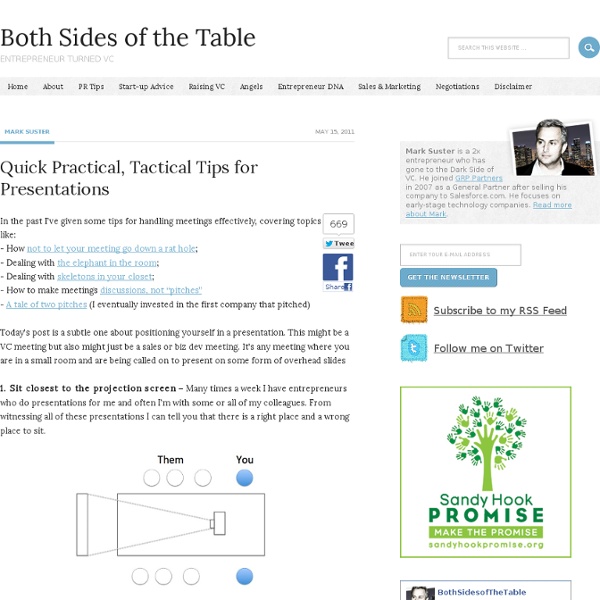 In the past I’ve given some tips for handling meetings effectively, covering topics like: - How not to let your meeting go down a rat hole; - Dealing with the elephant in the room; - Dealing with skeletons in your closet; - How to make meetings discussions, not “pitches” - A tale of two pitches (I eventually invested in the first company that pitched) Today’s post is a subtle one about positioning yourself in a presentation. This might be a VC meeting but also might just be a sales or biz dev meeting. It’s any meeting where you are in a small room and are being called on to present on some form of overhead slides 1. Sit closest to the projection screen – Many times a week I have entrepreneurs who do presentations for me and often I’m with some or all of my colleagues. If you look at Diagram A above you’ll see that the presenters are sitting at the opposite end of the table from where the screen is. 2. 3. 4. 5. 6. So, there you have it.

Google Offers To Re-Write Your Webpages On The Fly, Promising 25% To 60% Speed Improvements Google has long been obsessed with speed. It’s paramount in pretty much everything they do. Which is why the launch of Google+ with some — gasp — attention paid to design is even more surprising. But a new service Google is launching this evening very much puts the focus back on speed — an obsessive amount of focus, one might say. Page Speed Service is the latest tool in Google’s arsenal to help speed up the web. This service is also their most ambitious yet. 50 Things Successful People Have in Common Rating: 8.7/10 (25 votes cast) Self-help books are an amazing channel for finding nuggets of “betterment” for personal development. HOWEVER, the truth is that 90% of ANY self-help book is pretty much worthless. The author has a brilliant concept that is then repeated 2000 times too many until you hit the last chapter and the train ride’s over.

13 Business Books That Will Blow Your Mind Having never taken a business class in college I find that I read and listen to a lot of business books to round out my education. The books usually aren't "How to Manage Your Cash Flow" but rather get me to rethink the way I run my business, which--despite no business classes or diploma--continues to be in business 13 plus years after I started it. In that time, here are 13 of the books that had the biggest impact on how I run my business (in no particular order): Drive: The Surprising Truth About What Motivates Us by Daniel Pink: If you supervise anyone in your business, this book is a must read. It shows that what science knows about motivation, business isn't putting into practice. In fact, many of the incentives we create can actually de-motivate our employees.

Swiss Group Wants to Banish PowerPoint While most people might not love using Microsoft's PowerPoint to create presentations, at least one person is taking his distaste for the software to a global level. Matthias Poehm, a former software engineer-turned-public speaking trainer has started -- yes -- the Anti-PowerPoint Party (APPP) earlier this month. Headquartered in Bonstetten, Switzerland, the APPP calls itself an "international movement" that intends to "decrease the number of boring presentations worldwide." The goal is to make it so that people who don't want to use PowerPoint "will not have to justify themselves in the future," it says. Right. Here's the real kicker: The APPP says people who attend "futile" PowerPoint presentations result in almost $500 billion in hourly wage losses for employers worldwide.

Working Your Network: 5 Ways Networking Can Boost Business Rating: 9.8/10 (9 votes cast) A brilliant CEO said a perplexing thing to me once: “Deals are done on the golf course or at the bar.” Being a fairly new professional, working hard to create my meticulously “buttoned-up” persona to get ahead in the corporate world, I found this statement immensely confusing. Five Skills You Need for Startup Success, According to Ethernet Inventor Bo... Ethernet inventor and generally accomplished tech super-guy Bob Metcalfe gave a great opening keynote talk at this morning's Capital Factory Demo Day in Austin, Texas. The event has been good so far and is live streaming online for free. Metcalfe offered a wide ranging talk to open the day but included some tasty tidbits in the form of two lists: five personal skills that entrepreneurs need to develop in order to succeed in building tech companies that scale and six types of people a startup ecosystem needs to include in order to foster success. Five Skills Entrepreneurs Need Be healthy.

Do's and Dont's of Making Awesome Diagrams for Slides Yeah. I do loads of slide decks each year for several companies and there are two types of decks I do a lot. One is the presentation. One is the infodeck, which is really intended more as a document for distribution than as a presentation. The trouble is when I run into people who I can't convince there should be a difference.

5 Ways Banks Are Using Social Media Lon S. Cohen is a freelance writer and is @obilon on Twitter. He's also the Director of Communications at @ALSofGNY. Many banks have started using social websites to help them with everything from healing the financial industry to promoting their latest credit cards. By embracing the most popular tools available, the industry has also been embracing the best of what social media culture has to offer, and smaller, community banks seem to be leading the charge when it comes to social media innovation.