A View Of The US-Mexican Border 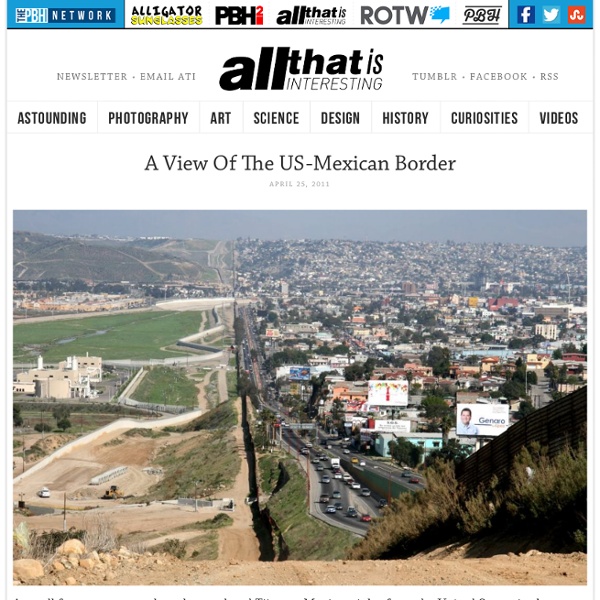 High school fashions, 1969 Fashion, Vintage High school fashions, 1969 i know what you’re thinking… are these more fashion snaps from coachella? Exclusive Interview with Photographer Peter Kemp – and 45 Absolutely Amazing Glamour Shots Peter Kemp is an absolutely fantastic photographer who builds visual stories out of fashionable life scenes. The photos that he takes are charged with glamour and mystery that gives the viewer a very particular feel. He was kind enough to reveal some things about his life as an artist and not only, in an exclusive interview he gave for Pxleyes.

The Most Stunning NME Photography Of The Year 2011 - The Big Picture - NME.COM - The world's fastest music news service, music videos, interviews, photos and free stuff to win 2011 has been another mentally busy year for NME's crack team of photographers. Making the most of their unprecendented access to bands across the globe, they've covered every inch of the music world over the last 12 months - from Camden to Williamsburg, Ibiza, Vancouver and of course Glastonbury - to capture endless digital reels of photographic excellence. From feather fights with Metronomy to projectile puking courtesy of Cerebral Ballzy, via intimate portraits of Florence and The Horrors plus Gerard Way and Beyonce on stage they've caught it all. Jarvis at Glasto?

The Girl Who Loves to Levitate (14 photos) - My Modern Metropolis - StumbleUpon Natsumi Hayashi is a sweet-looking Japanese girl who, one day, decided to take self-portraits..of herself levitating. She can be spotted in and around Tokyo, equipped with her SLR and her self-timer. When she feels the moment strike, she presses the shutter button down and then, quite literally, "jumps" into place. What I love most about her shots is that they don't feel forced. Natsumi has a way of making us feel as though she naturally levitates throughout life. When I asked her how others react to her jumping around Tokyo, here is a funny story that she shared.

Life and death in Aleppo (PHOTOS) ALEPPO, Syria — Their names were Issa, Ahmed and Sheik Mahmoud Qasim. They were fathers and brothers. They were students, teachers and laborers. 40 Witty Campaign Posters for a Cause Non-profit organizations use posters to deliver a particular message. These help inform people about current issues, problems and even the possible consequences of their actions. With a sentence that contains strong words or images, these posters give more impact than common commercial posters.

Created Equal... Photographer Mark Laita In America, the chasm between rich and poor is growing, the clash between conservatives and liberals is strengthening, and even good and evil seem more polarized than ever before. At the heart of this collection of portraits is my desire to remind us that we were all equal, until our environment, circumstances or fate molded and weathered us into whom we have become. Los Angeles- and New York-based photographer Mark Laita completed Created Equal over the course of eight years; his poignant words reflect the striking polarizations found in his photographs. Presented as diptychs, the images explore social, economic and gender difference and similarity within the United States, emulating and updating the portraiture of Edward Curtis, August Sander and Richard Avedon. This volume includes an introduction by noted culture writer and editorial cult figure Ingrid Sischy.