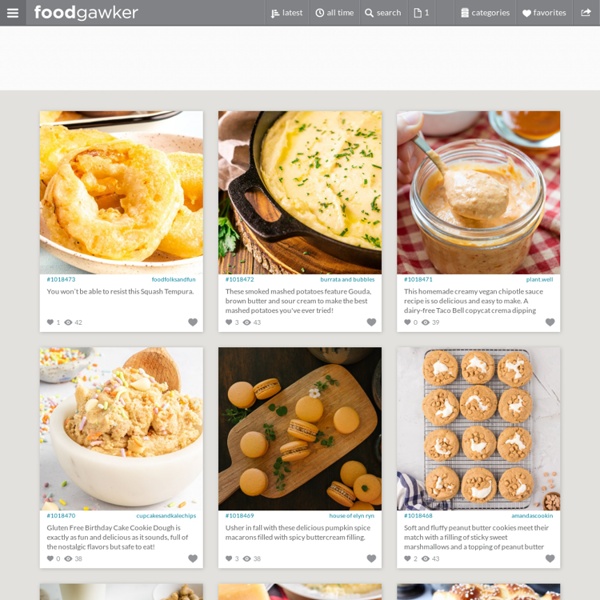 100 Time-Saving Search Engines for Serious Scholars While burying yourself in the stacks at the library is one way to get some serious research done, with today’s technology you can do quite a bit of useful searching before you ever set foot inside a library. Undergraduates and grad students alike will appreciate the usefulness of these search engines that allow them to find books, journal articles and even primary source material for whatever kind of research they’re working on and that return only serious, academic results so time isn’t wasted on unprofessional resources. Note: Visit our updated list for the latest in academic search engines. General Start off your research with one of these more general academic search engines.

gooseberry mooseberry: Shrimp and Noodle Salad It's been hot. We've had an almost unbearable heatwave last week. And once again cold dishes and salads are my friends. PRETZEL BITES Do you need a perfect snack for the big game? These Pretzel bites will hit the spot for sure. You can make a combination of Parmesan bites with a Cheese dip or Cinnamon and Sugar bites with a Vanilla glaze for dipping. I've finally used up my supply of Rhodes Roll dough . . . until I buy more. It's quite nice to have on hand when you need it. If you have some hanging around your freezer, you can whip these up in a jiffy.

Cook the Book: Cheesy Herbed Popovers [Photograph: Caroline Russock] Long before I felt comfortable baking bread at home, popovers were a part of my "fancy dinner for friends" repertoire. They were quick and easy, but also held the same magical appeal as a homemade, freshly baked yeasted loaf—at least for my college-aged buddies. I loved baking them not only for the oohs and ahhs, but also because I enjoyed watching the dramatic rise over the rim of the muffin tin that they baked in. Nowadays, I am far from intimidated when it comes to baking a loaf of bread, yeast and all, and my baking projects are a little more complicated. But I still occasionally bake up a batch of popovers to accompany dinner.

Oven Roasted Potatoes When I heard this month’s Kitchen Bootcamp Challenge was potatoes, I was pumped. Originally, I had great plans for the sweet potatoes still in my basement from last fall, but after researching and chatting with the hubby, I decided to go with Yukon Gold potatoes instead. My husband isn’t a huge fan of sweet potatoes and I wanted to make something he would enjoy too, so that’s how I settled on this oven roasted potato recipe. Yukon Golds are our favorite potato to grow in the garden and they absolutely melt in your mouth when freshly dug from the garden. But oddly enough, I’ve never actually roasted them in the oven. Of course, I’ve added them to a roast with carrots and onions and celery, you know the usual, but never on their own.

Brushetta A beautiful summer night (11 p.m. to be exact) in Drogheda. Remember when I first arrived, and I wrote a post about the “Irish diet?” Basically I was amazed that even though I was eating more starch, fat and sugar than ever before, I wasn’t gaining weight. I think at the time (it was still wintery in early March), I chalked it up to the fact that my body – used to the balmy climate of Los Angeles – was working overtime to keep warm in freezing-cold Ireland. Grown Up S’mores The man or woman behind the S’more is nothing short of a genius. Seriously, who would have thought to combine a graham cracker, a Hershey bar and some marshmallows? Whomever they were, they knocked it out of the sweet treat park.