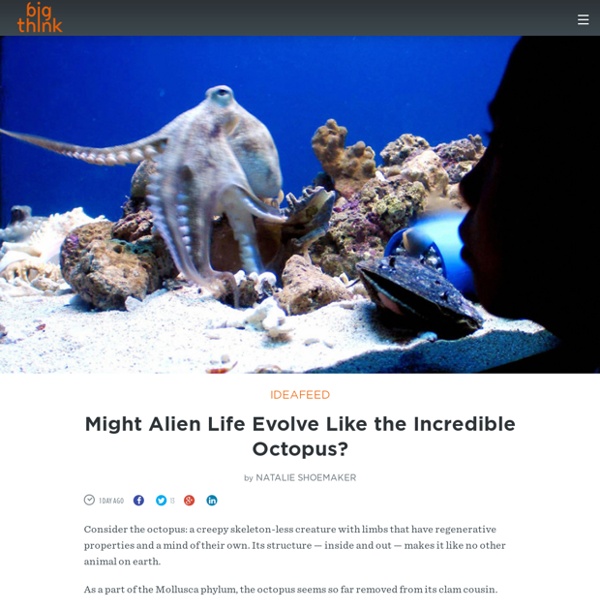 by Natalie Shoemaker Consider the octopus: a creepy skeleton-less creature with limbs that have regenerative properties and a mind of their own. Its structure — inside and out — makes it like no other animal on earth. As a part of the Mollusca phylum, the octopus seems so far removed from its clam cousin. Neurobiologist Benny Hochner, from the Hebrew University of Jerusalem in Israel, talked about this oddity in an interview with Alison Abbott from Nature: “Very simple molluscs like the clam — they just sit in the mud, filtering food. Scientists have marveled at the octopus for years, and now they've taken the time to delve deeper into its biology by decoding its genome. "The octopus appears so utterly different from all other animals, even ones it's related to, that the British zoologist Martin Wells famously called it an alien. “It’s important for us to know the genome, because it gives us insights into how the sophisticated cognitive skills of octopuses evolved.”

An Epochal Discovery: A Habitable Planet Orbits Our Neighboring Star One hundred and one years ago this October, a Scottish astronomer named Robert Innes pointed a camera at a grouping of stars near the Southern Cross, the defining feature of the night skies above his adopted Johannesburg. He was looking for a small companion to Alpha Centauri, our closest neighboring star system. Hunched over glass photographic plates, Innes teased out a signal. Across five years of images, a small, faint star moved, wiggling on the sky. It shifted just as much as Alpha Centauri, suggesting its fate was intertwined with that binary system. But this small star was closer to the sun than Alpha.

Networks of Genome Data Will Transform Medicine Breakthrough Technical standards that let DNA databases communicate. Why It Matters Your medical treatment could benefit from the experiences of millions of others. Try This! Easy Homemade Ginger Ale We have had an epiphany. And it’s called homemade ginger ale. You have to try this. We’ve made a version of this before using homemade ginger syrup, but this is a whole different ball game. This recipe from Crumpets and Cakes has you combine grated ginger, sugar, lemon juice, water, and a pinch of baker’s yeast in a 2-liter bottle. That little bit of yeast is all that’s needed to get this concoction nicely fizzy.

How a Musician Unraveled the Secrets of Whale Song Whale songs are some of the most hauntingly beautiful and bizarre noises in the world. But if it hadn’t been for acoustic biologist Katy Payne, we’d probably still be dismissing them as mere sounds — like the noises our own cats and dogs make when they’re hungry, frightened, interested, or affectionate. Payne, however, realized that whales are actually composing songs, not just making noise under the sea, and moreover, she found that over time, whales change their tune. These majestic marine mammals interact with each other to create songs of escalating length and complexity over the years, in what one might compare to jazz riffing or Indigenous Australian songlines, the cultural, social, and physical maps passed down through generations. Payne’s discoveries, and ongoing research into the subject, reveal the value of cross-disciplinary collaborations. Her research helped to improve our understanding of whales and the way they interact with each other.

Beautiful World of Sea Slugs-click on pic On land, slugs are far from nature's most beautiful creatures--but underwater, the family of shell-less creatures known as nudibranchs come in bright neons, glowing pastels, and vibrant primary colors. The 3,000 different kinds of nudibranchs get their color from the food they eat--and, in some cases, secrete the poisons from their prey to defend themselves against predators. The Fried Egg Nudibranch gets its name from the perfect yellow-and-white circles that line its back. Your Favorite Housewares Are Spewing Poison Dust Inside Your Home People buy the nicest homes they can afford. They spend years—sometimes decades—pouring money into nest-feathering by stocking up on creature comforts. It’s no wonder we spend 90 percent of our lives indoors. Like George Carlin said, it’s where all our stuff is.

We're More than Stardust — We're Made of the Big Bang Itself Transcript Anna Frebel: The work of stellar archaeology really goes to the heart of the "we are stardust" and "we are children of the stars" statement. You’ve probably heard it all but what does it actually mean? On Your Mark, Get Set, Grow: A Guide To Speedy Vegetables Sprouting broccoli will serve up florets in about 50 days. Not bad for this member of the brassica family. Laura Whitehead /Flickr hide caption itoggle caption Laura Whitehead /Flickr Sprouting broccoli will serve up florets in about 50 days. The adorable “sea bunny” - a nudibranch It’s round, and fluffy and has wiggly little ears! Sort of. These little sea creatures, affectionately dubbed “sea bunnies” have recently become social media celebrities.

Nudibranchs - The Flamboyant Sea Slug nicoboxethai/CC BY 2.0 Nudibranch, or what we usually call sea slugs, blow my mind. Ever since spotting one for myself during a tide pool trip about a year ago, I've been fascinated with these creatures. I think of them as the drag queens of the sea: flashy stand-outs that are always dressed to the nines. The one I found is a Hermissenda crassicornis -- the flashy little thing pictured below with bright pinkish-orange cerata waving like a feather boa and neon blue outlines around its tentacles.