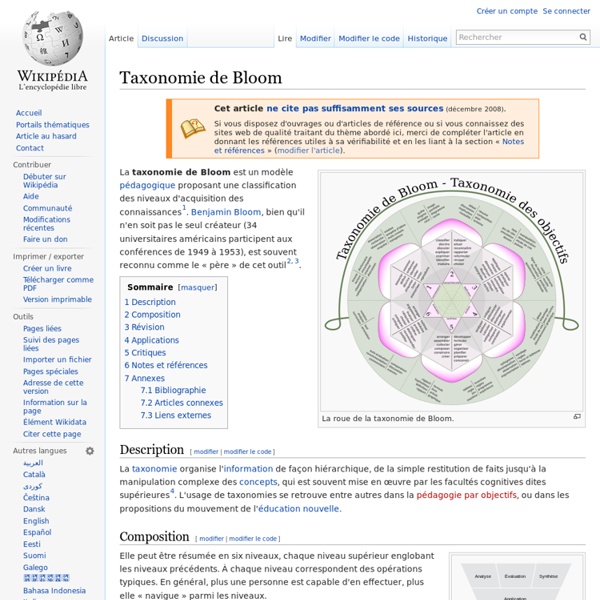 construct filters Previous article in the series: A Quick Overview of MSAA Despite having the flexibility to implement a custom resolve for MSAA, the “standard” box filter resolve is still commonly used in games. While the box filter works well enough, it has some characteristics that can be considered undesirable for a reconstruction filter. New Bloom's Taxonomy Poster for Teachers August 29, 2014 Bloom's taxonomy is one of the most popular learning taxonomies ever. Since its release in the last half of the 20th century, it has been widely adopted within the education sector and was used extensively to design and create learning materials and curriculum content. Bloom's taxonomy maps out learning skills along a thinking continuum that starts with lower order thinking skills in one end (e.g. remembering and understanding) and moves up in difficulty to the other end that embraces higher order thinking skills (e.g. evaluating and creating). However, Bloom's taxonomy has been repeatedly modified to suit the requirements of the era in which it is used .

singular hubbing Udacity gives students videos that they can watch at their own pace and be continually quizzed on. This past August fellow Singularity Hub writer Aaron Saenz wrote about Udacity, the online university created by Stanford artificial intelligence professor and Google autonomous vehicle leader, Sebastian Thrun. At the time Thrun was gearing up to teach his Introduction to Artificial Intelligence course to a class of 200 at Stanford. But why teach 200 when you can teach 1,000…or 160,000? How in questions The word “HOW” is one of the most productive words in English. It helps us create meaningful questions and sentences. The word “HOW” combines with many other words to create these questions.

brain bomb People maligning a modern diet tend to poke fingers at the the last 30 - 40 years. During this time obesity became a majority issue in the United States, and diabetes and metabolic syndrome afflicted many millions. However, from a nutritional perspective, diets 100 years ago weren’t that terrific either. Obesity was uncommon, but among certain populations, major vitamin and mineral deficiencies were rampant and deadly. A List of Some of The Best iPad Resources for Teachers Educational Technology and Mobile Learning has devoted a lot of its space to iPad and its educational usage. I know Android is not as much covered as iPad but as I have said before my second blog Teacher's Mobile Technology has all the educational apps and tips on how to use both Android and iPad, check it out and subscribe to stay updated about the future releases. Today's post is a culmination of all the hard work we have been doing here during this year.

intel arty AI research is highly technical and specialized, and is deeply divided into subfields that often fail to communicate with each other.[5] Some of the division is due to social and cultural factors: subfields have grown up around particular institutions and the work of individual researchers. AI research is also divided by several technical issues. Some subfields focus on the solution of specific problems. Others focus on one of several possible approaches or on the use of a particular tool or towards the accomplishment of particular applications. The central problems (or goals) of AI research include reasoning, knowledge, planning, learning, natural language processing (communication), perception and the ability to move and manipulate objects.[6] General intelligence is still among the field's long-term goals.[7] Currently popular approaches include statistical methods, computational intelligence and traditional symbolic AI.

trends and_cuts "Thomson [Thomson Reuters] makes the proprietary bibliography software EndNote, and claims that Zotero is causing its commercial business 'irreparable harm' and is wilfully and intentionally destroying Thomson's customer base. In particular, Thomson is demanding that GMU stop distributing the newer beta-version of Zotero that allegedly allows EndNote's proprietary data format for storing journal citation styles to be converted into an open-standard format readable by Zotero and other software. Thomson claims that Zotero 'reverse engineered or decompiled' not only the format, but also the EndNote software itself. ...