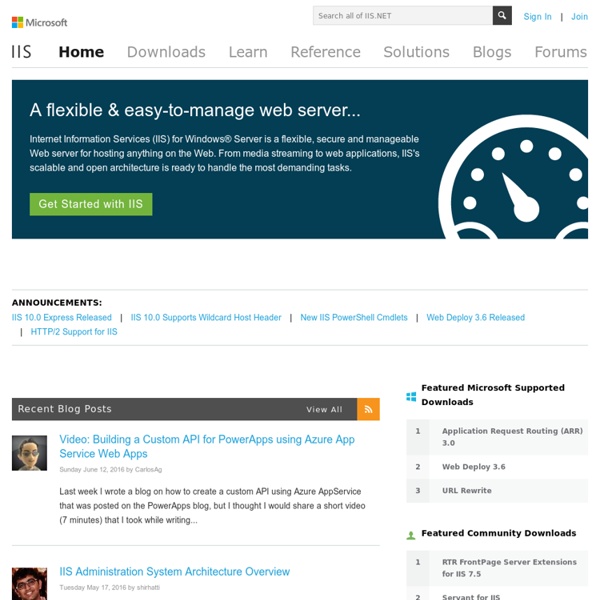 The Heartbleed vulnerability in OpenSSL ( CVE-2014-0160 ) has received a significant amount of attention recently. While the discovered issue is specific to OpenSSL, many customers are wondering whether this affects Microsoft’s offerings, specifically Windows and IIS. Microsoft Account and Microsoft Azure, along with most Microsoft Services, were not impacted by the OpenSSL vulnerability. Windo... Shortly after I published my FTP ETW Tracing and IIS 8 blog post, I was using the batch file from that blog to troubleshoot an issue that I was having with a custom FTP provider. One of the columns which I display in my results is Clock-Time, which is obviously a sequential timestamp that is used to indicate the time and order in which the events occurred.

How to search like a spy: Google's secret hacks revealed The National Security Agency just declassified a hefty 643-page research manual called Untangling the Web: A Guide to Internet Research (PDF) that, at least at first, doesn't appear all that interesting. That is, except for one section on page 73: "Google Hacking." "Say you're a cyberspy for the NSA and you want sensitive inside information on companies in South Africa," explains Kim Zetter at Wired. "What do you do?" Technet forums Frequently Posted Questions and Answers Following list of questions are from SCE 2007 and SCE 2010 forums and answers applies to SCE 2010.Document Owner: Anshu Agrawal Question 1 - How can I create auditing rules in Essentials? Question 2 - How do I set up a remote console in a different domain or using local policy? Question 3 - How can I discover network devices to manage?

How To Remove Koobface Virus Although it is highly recommended that Koobface or any other parasite should be removed using a automated software but still if you want to do it manually here is the procedure but before attempting anything, make sure you backup your computer: Using The Add\Remove Program Tool: This is not a 100% removal method because most of the malware don't really appear in the list but if they are you can do this:

Technet forums - System Center 2012 Configuration Manager Resources for IT Professionals Sign in United States (English) Brasil (Português)Česká republika (Čeština)Deutschland (Deutsch)España (Español)France (Français)Indonesia (Bahasa)Italia (Italiano)România (Română)Türkiye (Türkçe)Россия (Русский)ישראל (עברית)المملكة العربية السعودية (العربية)ไทย (ไทย)대한민국 (한국어)中华人民共和国 (中文)台灣 (中文)日本 (日本語) Multiple Chrome Users The multiple users feature allows the user to associate a set of preferences with a specific set of browser windows, rather than with an entire running instance of Chrome. Allowing different windows to run as different Chrome identities means that a user can have different open windows associated with different Google accounts, and correspondingly different sets of preferences, apps, bookmarks, and so on -- all those elements which are bound to a specific user's identity. Having multiple users in the Chrome browser also makes it easy to browse with separate identities without having to log in as separate users at the operating system level. Sync and Multiple Users In the multiple users model, the idea of syncing will need to adapt to the understanding that several distinct users (or, at least, identities) can be associated with a single browser instance -- and that creating a personal account for the browser need not necessarily establish an off-client repository to save its state.

How to Create Cityscape Concept Art In this tutorial, I will teach you how to easily create a successful piece of cityscape concept art. We'll be using a very basic 3D scene as a foundation for the piece, then taking it into Photoshop for some creative photo manipulation of reference photos, basic painting and adjustments. Let's create this urban scene! Editor's note: This tutorial was originally published on Psdtuts in December 2009. The Brief In Unix, how do I use SCP to securely transfer files between two computers? In Unix, you can use SCP (the scp command) to securely copy files and directories between remote hosts without starting an FTP session or logging into the remote systems explicitly. The scp command uses SSH to transfer data, so it requires a password or passphrase for authentication. Unlike rcp or FTP, scp encrypts both the file and any passwords exchanged so that anyone snooping on the network cannot view them.

Technet forums - Scripting This is a running list of all moderators on The Official Scripting Guys Forum! They are listed alphabetically by last name. A-Z Andrew Barnes (forum user name: Andrew Barnes) I have more than 15 years of experience ranging from desktop support to third line/server specialist. My first program was on the BBC Micro in 1982.

How to Create an iPad 2 From Scratch Using Photoshop In this tutorial, I’m going to show you how to draw Apple’s iPad 2. We are going to use vector-drawing techniques combined with manual drawing and layer styles to create a convincingly realistic iPad. We will also use Smart Objects to help us easily change the iPad’s screen content and the iPad’s Smart Cover color. Preview Step 1: Draw the iPad’s Basic Shape Create a new Photoshop document that has a 1500x1200px canvas. WordPress Cloud Hosting, WordPress Installer, Docker Container and VM For years, when I needed a local instance of WordPress, I’d spend a few hours installing MySQL, hacking Apache config files, downloading and setting up WordPress, configuring my localhost to point to the WordPress install, etc. I could get it to work, but it was a real ordeal, and when I was done, WordPress would not install plug-ins and themes the normal way: I had to download them, manually install them, and then go back to WordPress to use them.Then came MAMP, which made the set-up better, but installing plug-ins or themes still meant exiting WordPress, doing a manual download, moving the files to the correct folder, etc.With Bitnami Stack for WordPress, everything is self-contained. You launch Bitnami Stack for WordPress, and not only is everything there, ready to go, but it works just like WordPress.