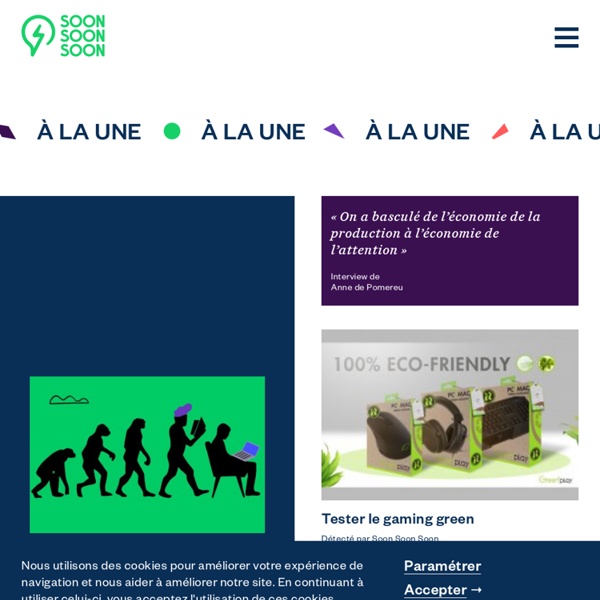 Watch celebrities become hideously ugly as strange 'flashed face' video effect works its horrible magic By Rob Waugh Published: 17:13 GMT, 22 May 2012 | Updated: 18:22 GMT, 22 May 2012 Liv Tyler's face warps into the image of hideous old crone, and Tom Cruise's chin distorts beyond all recognition. No, it isn't a vision of the future - it's a strange effect achieved by looking at a space 'between' flashing pictures of human faces. 'We aligned a set of faces at the eyes and started to skim through them. After a few seconds, we noticed that some of the faces began to appear highly deformed and grotesque,' say the University of Queensland researchers who uncovered the effect.

Data Farming: Demonstrating the Benefits of Urban Agriculture [INFOGRAPHIC] Transforming underutilized land into productive urban farms was one of the many topics which were presented at the recent Kansas City Design Week. Jerome Chou, past Director of Programs at the Design Trust for Public Space, presented his unique experience with the implementation of the Five Boroughs Farm in New York City and the impact that urban agriculture can have on low-income areas of a city. Chou pointed out in his presentation that having the land available for an urban farm is only half of the battle. The other half involves changing local zoning laws, influencing political opinion, garnering economic support, and proving the project will have a net benefit to a community. These challenges where not unique to just New York City but also to Kansas City’s 18th and Broadway Urban Farm which was also presented at Kansas City Design Week. Click to view in full.

3-D It Yourself, Thanks to New Library Site (Courtesy NYPL Labs)Samuel Dixon crossing Niagara. Four years ago, a San Francisco artist and writer named Joshua Heineman began making animated versions of digitized vintage stereographs from the New York Public Library’s collection and posting them on his blog. The project quickly went viral, attracting as many as 70,000 visitors a day to its mesmerizing 3-D animations of old-school cyclists zipping around on penny-farthings and heavy-skirted matrons reclining over a picnic. Now the library itself has done Mr.

24 Inspirational DIY Ideas To Light Your Home 554 Flares Twitter 91 Facebook 0 Google+ 41 Pin It Share 422 Email -- 554 Flares × Lighting project is my favorite thing to DIY. These 26 lighting DIY ideas help you to get inspired. Most of these are pretty easy, you don’t have to be an expert in crafts nor spend too much time or money. Share!

Smartphone Projector Ever wanted to project your favourite movie onto the wall while you’re snuggled up in bed using just your phone? Or thought it would be cool to show your mates funny fail videos but sometimes there’s just too many of them to crowd around a small screen? Smartphone Projector has been designed by Luckies of London to create intimate screenings any time, any place. Whether you want to set up visuals for a house party or simply watch music videos with your friends, Smartphone Projector is the answer. Go hands free, put your feet up and view at up to 8 x magnification. Get more from your smart phone with the original, lo-fi, D.I.Y Smart Phone projector.

Open E Land Open E Land is part of a worldwide movement working to transition to a sustainable, just, resilient social-economic model. Our name reflects our beliefs: Knowledge should be shared openly and not encumbered by patents or trade secrets. Our economic, environmental, and energy problems are all linked and cannot be solved in isolation. We need to profoundly change our agricultural systems and our relationship with the land.

Submit Your Video Projects We are always glad to view new projects from fellow VJs/Video Artists and will certainly take time to watch every submissions, please be patient as it may take some time until videos are posted on the site due to the large amount of projects we receive. Quality of content on our site is important to keep viewers interested, often the reason for refusals will be due to the following: low definition, poor editing, copyright infringement, bad sound and image quality. If you are unsure of the quality of your video please, feel free to ask questions by mailing us HERE. Moss Graffiti: The Coolest DIY Project Ever Contemporary artists have discovered that street art is not only beautiful to look at, but that it can also be soft and smooth to the touch. Moss graffiti is eco-friendly as it doesn’t use any aerosols; what the “painting” needs is just a dash of water to thrive. Here is a recipe for how to make your own moss graffiti. Just bear in mind that choosing the right space for street art is very important too, as, in any case, vandalism is a crime. Show Full Text