Detroit, de la cité fantôme à la ville laboratoire. BLOG Rehabilitation de Detroit. The tiny urban island of downtown Detroit. In 1950, Detroit was America's fifth largest city and one of the most prosperous on the back of its booming motor industry. 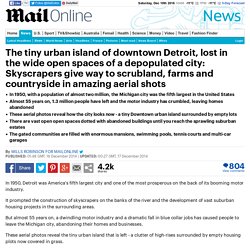 It prompted the construction of skyscrapers on the banks of the river and the development of vast suburban housing projects in the surrounding areas. But almost 55 years on, a dwindling motor industry and a dramatic fall in blue collar jobs has caused people to leave the Michigan city, abandoning their homes and businesses. These aerial photos reveal the tiny urban island that is left - a clutter of high-rises surrounded by empty housing plots now covered in grass. There are vast areas of open spaces dotted with crumbling industrial buildings and barely-standing Victorian homes until you reach the upmarket suburbs.

The land then fills up with gated communities and huge estates complete with swimming pools, tennis courts and multi-car garages. Scroll down for video A city block, that was once the site of the John A. Loaded: 0% Progress: 0% MinimizeExpandClose. Detroit : la chute de "Motor City". Economie - Infographie : Detroit, une ville à genoux. Bienvenue ! 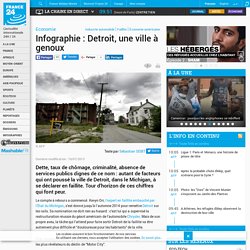 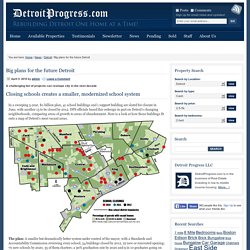 DPS officials based this redesign in part on Detroit’s changing neighborhoods, comparing areas of growth to areas of abandonment. Here is a look at how those buildings fit onto a map of Detroit’s most vacant areas. The plan: A smaller but dramatically better system under control of the mayor, with a Standards and Accountability Commission reviewing every school; 54 buildings closed by 2012, 22 new or renovated opening; 70 new schools by 2020, 35 of them charters; a 90% graduation rate by 2020 and 9 in 10 graduates going on to advanced education. What has to happen: Education reform is critical to the city’s ability to attract and retain families. Former casino may be new police headquarters Foundation investments. Détroit by lfmaltese on Genially.