Log In. Log In. Saving Detroit’s Art. Fate of Detroit’s Art Hangs in the Balance. As Detroit Flounders, Its Art Scene Flourishes. The night of June 20 was the Detroit native and photographer Sebastian Sullen’s first art exhibition, a group show called “Art Ethereal: Beauty and the Beast,” named for his contradictory subject: his city’s majestic architecture and scarred urban blight. 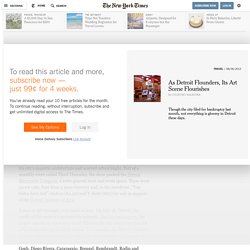 In Detroit, a Case of Selling Art and Selling Out. Merely considering a priceless collection as an “asset” — and encouraging the public to do so — is pernicious and predatory. 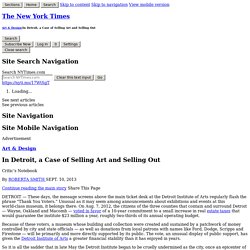 As Annmarie Erickson, the institute’s chief operating officer, put it to me on Friday, “The more price, value and sale are discussed, the more palatable it becomes to people, the less shocking.” Ms. Erickson also pointed out that if major works were sold, the buyers most likely able to afford them would be private collectors from Russia, China or the Middle East. 9 Artists on Why They Live in Detroit. After 19 years in Brooklyn, Galapagos Art Space is moving to Detroit, where you can still buy a romantically cast-off industrial building for cheap, just like you used to be able to do in the gritty old New York, before it turned into a polished bauble of global capitalism and everyone in the world decided they wanted to live here. 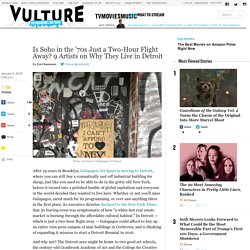 Whether or not you’ll miss Galapagos, cared much for its programming, or ever saw anything there in the first place, its executive director declared to the New York Times that its leaving town was symptomatic of how “a white-hot real estate market is burning through the affordable cultural habitat.” In Detroit — which is just a two-hour flight away — Galapagos could afford to buy up an entire ruin-porn campus of nine buildings in Corktown, and is thinking of expanding it mission to start a Detroit Biennial in 2016. And why not? Last Stop on the L Train: Detroit. Photo “Detroit, Just West of Bushwick,” read the first billboard that popped up in Bushwick, Brooklyn, this spring, with a working class scene from one of Diego Rivera’s “Detroit Industry” murals. 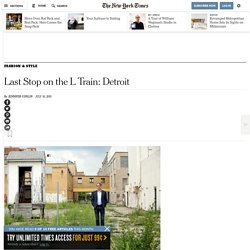 “Detroit, Be Left Alone,” a second one preached soon after, again in Bushwick. And then a third sign appeared, in two locations in Brooklyn and two in Manhattan — “Detroit: Now Hiring.” No one quite knew where they were coming from or who had put them up. But when an unrelated photo popped up on Instagram — “Move to Detroit” spray-painted on a girder of the Brooklyn Bridge — the campaign’s anonymous crusader finally revealed himself. “I rent billboard spaces where others don’t see value. For Detroit Artists, Almost Anything Goes. “I took a different approach to art and museums, and it works,” said Mr. 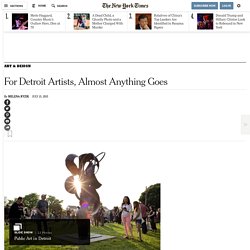 Dabls, 66, who is also a Kresge Foundation fellow. “What it has suggested to people who come here is, you can pretty much do what you want. You don’t have to start from the top.” Photo Last Friday, he visited a fellow stalwart, Robert Sestok, who was inaugurating his new sculpture garden behind his own home and studio. In Detroit, a Case of Selling Art and Selling Out. Glogin?URI= Detroit Artists at Marianne Boesky and Marlborough Chelsea Galleries. Photo DETROIT — “There are cities that get by on their good looks, offer climate and scenery, views of mountains or oceans, rockbound or with palm trees,” Elmore Leonard wrote. 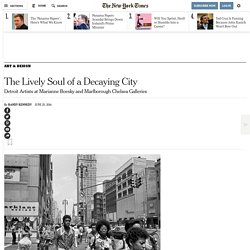 “And there are cities like Detroit that have to work for a living.” One place where the city punched in for generations was a collection of warehouses along the Detroit River known as the Dry Docks Engine Works, where a pre-automobile Henry Ford worked as an apprentice machinist. Almost a century later, in a Detroit well into economic free fall, a teenager named Todd Levin worked summers in one of the same buildings, washing down grease-caked machinery. But on breaks, he would use the frayed city as an open art book, wandering to places like Mies van der Rohe’s Lafayette Park housing development and to Heidelberg Street , where the artist Tyree Guyton was beginning to reimagine urban blight as Surrealist assemblage.

“The last thing I want is for the show to be seen as ‘Up with Detroit,’ ” said Mr. Ms. Marie T. Glogin?URI= Homes as Art, Destroyed in Detroit - For almost three decades, Tyree Guyton, an artist, has been turning mostly. Glogin?URI= Glogin?URI= 10 Reasons You Should Care About The Endangered Detroit Art Museum. Art admirers from New York to Los Angeles are likely feeling the reverberations of last week’s Detroit bankruptcy news. 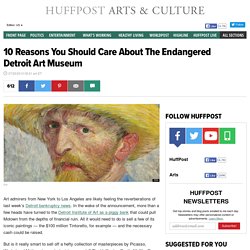 In the wake of the announcement, more than a few heads have turned to the Detroit Institute of Art as a piggy bank that could pull Motown from the depths of financial ruin. All it would need to do is sell a few of its iconic paintings — the $100 million Tintoretto, for example — and the necessary cash could be raised. But is it really smart to sell off a hefty collection of masterpieces by Picasso, Warhol and Matisse to meet short-term needs? The Huffington Post’s Mallika Rao reported, deaccessioning DIA works might not be the most economically wise decision. Detroit mired in fresh controversy over sale of 60,000-piece art collection. Detroit's Art is Worth More In the Museum than Out. When rumors that the Detroit Institute of Art (DIA) might sell its treasured paintings to balance the city’s ledgers first surfaced in May, I wrote a defense of the museum on cultural grounds. 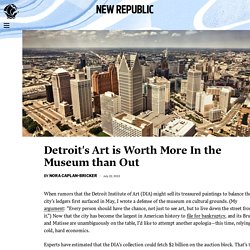 (My argument: “Every person should have the chance, not just to see art, but to live down the street from it.”) Now that the city has become the largest in American history to file for bankruptcy, and its Bruegel and Matisse are unambiguously on the table, I’d like to attempt another apologia—this time, relying on cold, hard economics. Experts have estimated that the DIA’s collection could fetch $2 billion on the auction block. 502 Bad Gateway. Museum Fact Sheet — The Detroit Institute of Arts. 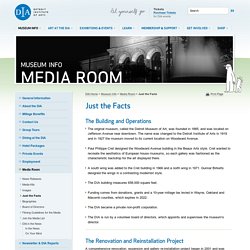 Stryker of the Detroit Free Press talks DIA art and bankruptcy. How the arts inspire change in Detroit. In April of 2014, Damian Woetzel and the Aspen Institute Arts Program convened a Strategy Group in Detroit. 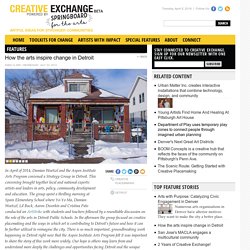 This convening brought together local and national experts: artists and leaders in arts, policy, community development and education. The group spent a thrilling morning at Spain Elementary School where Yo-Yo Ma, Damian Woetzel, Lil Buck, Aaron Dworkin and Cristina Pato conducted an ArtStrike with students and teachers followed by a roundtable discussion on the role of the arts in Detroit Public Schools. In the afternoon the group focused on creative placemaking and the ways in which art is contributing to Detroit’s future and how it can be further utilized to reimagine the city. There is so much important, groundbreaking work happening in Detroit right now that the Aspen Institute Arts Program felt it was important to share the story of this work more widely.

Donors pledge $330 million to save Detroit art museum collection. In a photo from Tuesday, Dec. 10, 2013 at the Detroit Institute of Arts in Detroit, the Detroit Industry Murals by the Diego Rivera are seen in Rivera Court at the DIA. Bankrupt Detroit’s ability to retain or protect art masterpieces bought with taxpayer dollars during better times could come down to the generosity of strangers. New York auction house Christie’s is expected this week to hand over its final report on the value of about 3,200 city-owned pieces at the Detroit Institute of Arts to state-appointed emergency manager Kevyn Orr.

(Carlos Osorio/AP) By Katherine Boyle January 13, 2014 A group of national and local philanthropic foundations have pledged $330 million to bolster Detroit’s municipal pension funds and help protect the Detroit Institute of Art’s collection from a sale to creditors, according to federal mediators involved with bankruptcy proceedings. The Ford Foundation, the John S. and James L. Chief U.S.