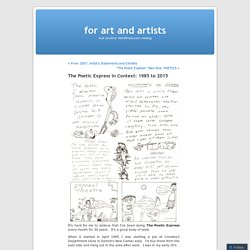 It’s a good body of work. When it started in April 1985 I was starting a job at Crowley’s Department store in Detroit’s New Center area. I’d bus there from the east side and hang out in the area after work. I was in my early 30’s. By 1992, I’d moved down to “my favorite neighborhood” in the cultural center / Wayne State University area. It started like this: In the 1970’s, I’d been typing up my poetry on a manual typewriter and printing it up onto double-sided sheets.

I was trying to declare my independence from the world of “normal poetry” which seemed too insular and rarefied to me. I’ve always felt myself to be an outsider in my way. The Poetic Express has been a public face and a laboratory for experimentation, work and play. Much of the context is tied to my life in the city of Detroit.

As part of the online version of The Poetic Express, I’ve written a special introduction for each volume. La messagerie avec espace de stockage gratuit de Google. Neveplast Applications - Swedice - Ride, Slide & Glide. McNICHOLS Quality ECO-MESH® Products. How To Make Big Ass Bubbles. One couple's cool plans for Detroit's vacant Cooley High. When Cooley High School was built in 1928, Detroit was racing toward its population peak and architects at the time were experimenting beyond traditional Victorian Gothic styles in favor of influences from other regions. 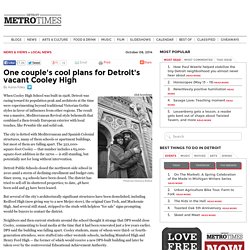 The result was a massive, Mediterranean Revival-style behemoth that combined a then-trendy European exterior with local touches, like Pewabic tile and solid oak. The city is dotted with Mediterranean and Spanish Colonial structures, many of them schools or apartment buildings, but most of them are falling apart. The 322,000-square-foot Cooley — that number includes a 65,000-square-foot addition in the 1970s — is still standing, but potentially not for long without intervention. Detroit Public Schools closed the northwest-side school in 2010 amid a storm of declining enrollment and budget cuts.

Since 2009, 114 schools have been closed. Cooley was designed by the Donaldson and Meier firm, which handled the David Stott Building in downtown Detroit. George Clinton (musician) Clinton was born in Kannapolis, North Carolina, grew up in Plainfield, New Jersey, and currently resides in Tallahassee, Florida. 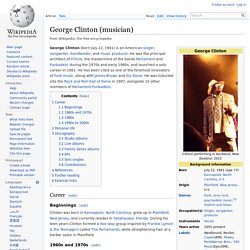 During his teen years Clinton formed a doo wop group inspired by Frankie Lymon & the Teenagers called The Parliaments, while straightening hair at a barber salon in Plainfield. Clinton's efforts as a solo artist began in 1982. He is also a notable music producer who works on almost all the albums he performs on, and has produced albums for Bootsy Collins and Red Hot Chili Peppers, among others. Beginning in the early 1980s, Clinton recorded several nominal solo albums, although all of these records featured contributions from P-Funk's core musicians. The primary reason for recording under his own name was legal difficulties, due to the complex copyright and trademark issues surrounding the name "Parliament" (primarily) and Polygram's purchase of that group's former label Casablanca Records. Rapper Dr. P-Funk.

George Clinton and P-Funk All Stars, Long Beach 2009 P-Funk recordings have been 'extensively' sampled in rap and hip-hop music, especially by Dr. 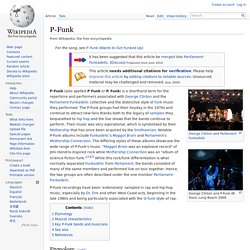 Dre and other West Coast acts, beginning in the late 1980s and being particularly associated with the G-funk style of rap. Etymology[edit] The etymology of the term P-Funk is subject to multiple interpretations. The Concert Database. Lean & Green Michigan™ - Michigan's Energy Finance Marketplace™ About Us - Greening Detroit. Our Motown Theme Song: “ GreeningDetroit is on the Move” Yes that’s right; we have been given our own Motown theme song by some old school legendary Detroiters! 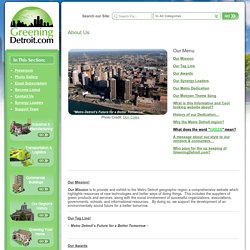 Special thanks go out to our friends that donated their hard work, time, and efforts in creating a new song with an old sound to it… LCT: Lukata Kenyatta, Calvin Robinson, and Tommy Douglas. Click here for “GreeningDetrot.com Theme Song Lyrics” What is this “Informative and Cool looking” website about? We have been called “The Big Green Umbrella” of information for one of the Largest Industrial Regions of the World!!! Not just a website, but an informational portal of Synergies and Opportunities.

At times GreeningDetroit.com works as a Public Relations company, assisting in pushing out press releases and articles. Consumer’s marketing needs change as they leave work to return to their homes, and vice versa. We own over 50 other domains, and plan in the future to expand to other geographic region. History of our Dedication… OPEN CHAPTER:African Omnidevelopment Space Complex / We New - ARTEIDOLIA. Ubadiah Bey McConner Ra’maatubadahhotep March 2015 Afterwords by Michael Carey & patrick brennan Writing Black Out Loud 1939-1959 Saturday, November 11, 1939, sixteen minutes after high noon, at precisely 12:16 pm, I came into this existence on the Southside of Pontiac, Michigan 30 minutes after the birth of my twin brother Rashid. 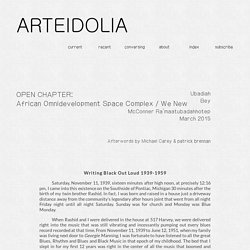 In fact, I was born and raised in a house just a driveway distance away from the community’s legendary after hours joint that went from all night Friday night until all night Saturday. Sunday was for church and Monday was Blue Monday. When Rashid and I were delivered in the house at 517 Harvey, we were delivered right into the music that was still vibrating and incessantly pumping out every blues record recorded at that time. NIKOLA TESLA. Encore Michigan - Theater, Theater Events, Theater Reviews, Theater Calendar. By Donald V. 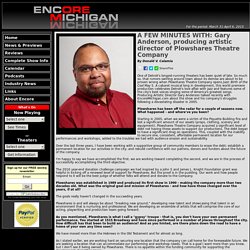 Calamia ShareThis One of Detroit's longest-running theaters has been quiet of late. So much so, that rumors swirling around town about its demise are about to be proven wrong when Plowshares Theatre Company opens Jazz: Birth of the Cool May 5. A cabaret musical long in development, this world premiere production celebrates Detroit's love affair with jazz and features some of the city's best voices singing some of America's greatest songs. Plowshares has been off the radar for a couple of seasons now. Starting in 2005, when we were a victim of the Piquette Building fire and lost a significant amount of our assets (props, clothing, scenery and equipment), Plowshares Theatre Company acquired a significant level of debt not having those assets to support our productions.