Do You Speak American . What Speech Do We Like Best? . Correct American . Decline. Language Diplomacy In this reprint from the December 1983 issue of The Atlantic Monthly, Geoffrey Nunberg makes an impassioned plea for civility when grammarians assess a changing language. 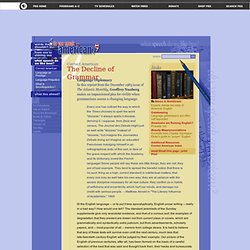 Every one has noticed the way in which the Times chooses to spell the word "diocese;" it always spells it diocess, deriving it, I suppose, from Zeus and census. The Journal des Débats might just as well write "diocess" instead of "diocese," but imagine the Journaldes Débats doing so! Imagine an educated Frenchman indulging himself in an orthographical antic of this sort, in face of the grave respect with which the Academy and its dictionary invest the French language! Some people will say these are little things; they are not; they are of bad example. IS the English language -- or to put it less apocalyptically, English prose writing -- really in a bad way? It is absurd even to talk about a language changing for the better or the worse Linguistic manners are like any others. Blooming English - Kate Burridge.

THE prevailing taste of the public for anecdote has been censured and ridiculed by critics, who aspire to the character of superior wisdom: but if we consider it in a proper point of view, this taste is an incontestible proof of the good sense and profoundly philosophic temper of the present times. 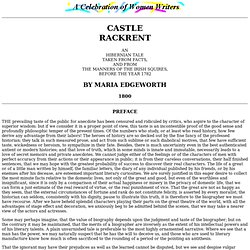 Of the numbers who study, or at least who read history, how few derive any advantage from their labors! The heroes of history are so decked out by the fine fancy of the professed historian; they talk in such measured prose, and act from such sublime or such diabolical motives, that few have sufficient taste, wickedness or heroism, to sympathize in their fate.

Besides, there is much uncertainty even in the best authenticated antient or modern histories; and that love of truth, which in some minds is innate and immutable, necessarily leads to a love of secret memoirs and private anecdotes. Monday Morning. HAVING out of friendship for the family, upon whose estate, praised be Heaven! Essays of Hazlitt, A List of those ON LINE at blupete. William Hazlitt's General Essays. 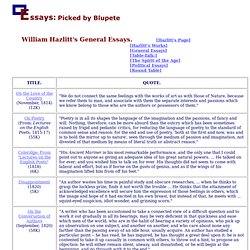 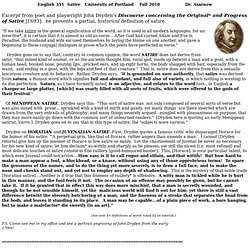 Asarnow Excerpt from poet and playwright John Dryden's Discourse concerning the Original* and Progress of Satire [1693]: he presents a partial, historical definition of satire. "If we take satire in the general signification of the word, as it is used in all modern languages, for an invective*, it is certain that it is almost as old as verse....After God had cursed Adam and Eve in Paradise, the husband and wife excused themselves by laying the blame on one another, and gave a beginning to those conjugal dialogues in prose which the poets have perfected in verse.

" Dryden on HORATIAN and JUVENALIAN SATIRE: First, Dryden quotes a famous critic who disparaged Horace for the humor of his satire. “‘A perpetual grin, like that of Horace, rather angers than amends a man.’ (See over for definitions of words noted by an asterisk.) P.S. Definitions (lifted from the American Heritage Dictionary): o·rig·i·nal (…-r¹j“…-n…l) 4.

Walter Pater The Renaissance: Studies in Art and Poetry. O regard all things and principles of things as inconstant modes or fashions has more and more become the tendency of modern thought. 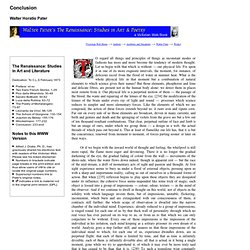 Let us begin with that which is without — our physical life. Fix upon it in one of its more exquisite intervals, the moment, for instance, of delicious recoil from the flood of water in summer heat. What is the whole physical life in that moment but a combination of natural elements to which science gives their names? But those elements, phosphorus and lime and delicate fibres, are present not in the human body alone: we detect them in places most remote from it.

Our physical life is a perpetual motion of them — the passage of the blood, the waste and repairing of the lenses of the eye, [234] the modification of the tissues of the brain under every ray of light and sound — processes which science reduces to simpler and more elementary forces. Philosophiren, says Novalis, ist dephlegmatisiren, vivificiren. Bulletin of the Atomic Scientists.