Ghost Cities Of 2100. Detroit Urged to Tear Down 40,000 Buildings. “Detroit needs to act aggressively to eradicate the blight in as fast a time as possible,” the report concluded, noting that the city needed to move faster than any other city contending with a high level of decay to keep matters from growing even worse. 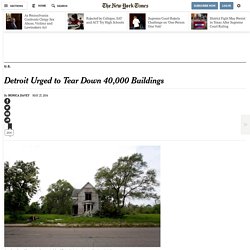 City leaders call for ending blight in the city’s residential neighborhoods in five years, while acknowledging that dealing with big empty industrial buildings — some 559 of them — could take longer. “These structures are unique because of their larger size and their potential for greater environmental issues than other structures,” the report said, noting that the cost of demolishing just a single large industrial building can run into the tens of millions of dollars. OPEN Map “Without a solution,” the report said, “they will continue to exert a downward pull on any efforts to restore the neighborhoods in which they are located, and as well as on the city as a whole.” Kevyn D. Still, the challenges ahead are enormous. OPEN Document Mr. Wayne County had nation's second largest population loss last year. After eight years of leading the nation in population loss, Wayne County ranked second last year behind Cook County, Illinois, according to Census data released today. 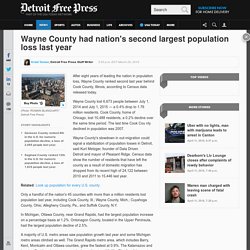 Wayne County lost 6,673 people between July 1, 2014 and July 1, 2015 — a 0.4% drop to 1.76 million residents. Cook County, home of Chicago, lost 10,488 residents, a 0.2% decline over the same time period. The last time Cook Cou nty declined in population was 2007. Wayne County's slowdown in out-migration could signal a stabilization of population losses in Detroit, said Kurt Metzger, founder of Data Driven Detroit and mayor of Pleasant Ridge. Census data show the number of residents that have left the county as a result of domestic migration has dropped from its recent high of 24,122 between 2010 and 2011 to 15,446 last year.

Related: Look up population for every U.S. county. The Post-Post-Apocalyptic Detroit. Photo In downtown Detroit, at the headquarters of the online-mortgage company Quicken Loans, there stands another downtown Detroit in miniature. 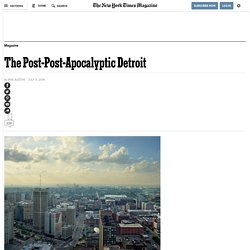 The diorama, made of laser-cut acrylic and stretching out over 19 feet in length, is a riot of color and light: Every structure belonging to Quicken’s billionaire owner, Dan Gilbert, is topped in orange and illuminated from within, and Gilbert currently owns 60 of them, a lordly nine million square feet of real estate in all. He began picking up skyscrapers just three and a half years ago, one after another, paying as little as $8 a square foot. He bought five buildings surrounding Capitol Park, the seat of government when Michigan became a state in 1837. He snapped up the site of the old Hudson’s department store, where 12,000 employees catered to 100,000 customers daily in the 1950s.

Property costs have dropped to the point that barriers to ownership — to a sort of mogulhood, even — are absurdly low. Continue reading the main story. Flint's long misery, at the hands of urban policy. If you look at what has been happening in Flint, long before children were drinking foul water from the faucets in their homes, you’d not be surprised that any measure of wicked reality was headed the city’s way. 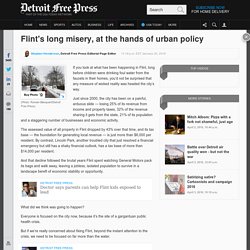 Just since 2000, the city has been on a painful, arduous slide — losing 25% of its revenue from income and property taxes, 32% of the revenue sharing it gets from the state, 21% of its population and a staggering number of businesses and economic activity. The assessed value of all property in Flint dropped by 43% over that time, and its tax base — the foundation for generating local revenue — is just more than $6,000 per resident. By contrast, Lincoln Park, another troubled city that just resolved a financial emergency but still has a shaky financial outlook, has a tax base of more than $14,000 per resident.

What did we think was going to happen? Everyone is focused on the city now, because it’s the site of a gargantuan public health crisis. But former Democratic Gov. Detroit Population Down 25 Percent, Census Finds. Before the clouds came in. Detroit's population loss slows; some suburbs see gains. Detroit continues to lose residents, but the population loss appears to be slowing, with about 1% moving out between 2013 and 2014, according to estimates released today by the U.S. 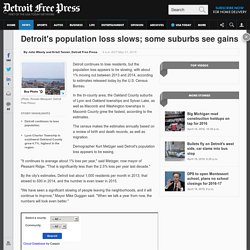 Census Bureau. In the tri-county area, the Oakland County suburbs of Lyon and Oakland townships and Sylvan Lake, as well as Macomb and Washington townships in Macomb County grew the fastest, according to the estimates. The census makes the estimates annually based on a review of birth and death records, as well as migration. Demographer Kurt Metzger said Detroit's population loss appears to be easing. "It continues to average about 1% loss per year," said Metzger, now mayor of Pleasant Ridge. By the city's estimates, Detroit lost about 1,000 residents per month in 2013; that slowed to 500 in 2014, and the number is even lower in 2015. "We have seen a significant slowing of people leaving the neighborhoods, and it will continue to improve," Mayor Mike Duggan said. Read or Share this story: