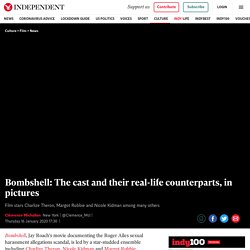 Theron has earned an Oscar nomination for her performance as Megyn Kelly, then a star Fox News Anchor. Robbie, meanwhile, scored a nomination in the Best Supporting Actress category for her turn as Kayla Pospisil, one of several fictional characters created for the film. Download the new Independent Premium app Sharing the full story, not just the headlines Some of Bombshell's characters, such as Theron's Kelly, have direct real-life inspirations – though the film remains a dramatisation of actual events.

Click through the gallery below to read up on Bombshell's characters and their real-life counterparts: Remember that heist movie with Rihanna and Lupita Nyong'o? The actress' lips are sealed on the details  Bong Joon-ho. South Korean film director and screenwriter In 2017, Metacritic ranked Bong sixteenth on its list of the 25 best film directors of the 21st century.[5] His films feature social themes, genre-mixing, black humor, and sudden mood shifts.[6] Early life[edit] Bong Joon-ho was born in Daegu, South Korea in 1969, the youngest of four children.[7] His father was Bong Sang-gyun, a graphic and industrial designer and professor, while his mother Park So-young was a full-time housewife.[7][8] Bong's maternal grandfather, Park Taewon, was an esteemed author during the Japanese colonial period, most famous for his work A Day in the Life of Gubo the Novelist and his defection to North Korea in 1950.[7][9] Bong's older brother Bong Joon-soo is an English professor at the Seoul National University, while his older sister Bong Ji-hee teaches fashion styling at Anyang University.[8] In the early 1990s, Bong completed a two-year program at the Korean Academy of Film Arts. 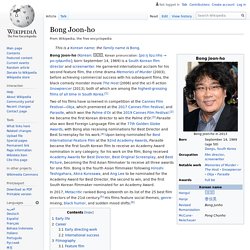 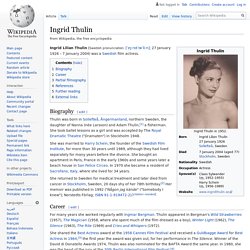 Biography[edit] Thulin was born in Sollefteå, Ångermanland, northern Sweden, the daughter of Nanna (née Larsson) and Adam Thulin,[1] a fisherman. She took ballet lessons as a girl and was accepted by The Royal Dramatic Theatre ("Dramaten") in Stockholm 1948. She was married to Harry Schein, the founder of the Swedish Film Institute, for more than 30 years until 1989, although they had lived separately for many years before the divorce. Alan Dershowitz. American lawyer, author Alan Morton Dershowitz (; born September 1, 1938) is an American lawyer and academic. 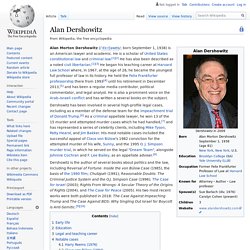 He is a scholar of United States constitutional law and criminal law.[1][2] He has also been described as a noted civil libertarian.[1][3] He began his teaching career at Harvard Law School where, in 1967, at the age of 28, he became the youngest full professor of law in its history. Anna May Wong. 20th-century Chinese American actress Anna May Wong (born Wong Liu Tsong; January 3, 1905 – February 3, 1961) was an American actress, considered to be the first Chinese American Hollywood movie star,[1] as well as the first Chinese American actress to gain international recognition.[2] Her varied career spanned silent film, sound film, television, stage, and radio. 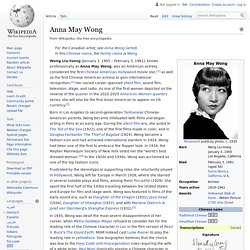 Biography Early life. Richard Hallgarten. L'Avventura. Plot[edit] Anna (Lea Massari) meets her friend Claudia (Monica Vitti) at her father's villa on the outskirts of Rome before leaving on a yachting cruise on the Mediterranean. 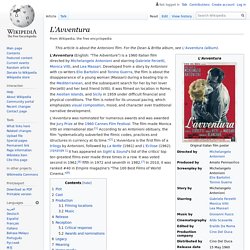 They drive into Rome to Isola Tiberina near the Pons Fabricius to meet Anna's boyfriend, Sandro (Gabriele Ferzetti). While Claudia waits downstairs, Anna and Sandro make love in his house. Afterwards, Sandro drives the two women to the coast where they join two wealthy couples and set sail south along the coast. Michelangelo Antonioni. Italian film director and screenwriter (1912-2007) Early life[edit] Antonioni was born into a prosperous family of landowners in Ferrara, Emilia Romagna, in northern Italy. 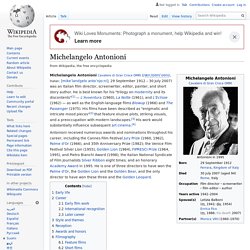 He was the son of Elisabetta (née Roncagli) and Ismaele Antonioni.[5] The director explained to Italian film critic Aldo Tassone: My childhood was a happy one. Hey Hollywood: You’re wrong and Ricky Gervais is right. Well, as the old song goes, “You can’t please everyone, so you’ve got to please yourself.” 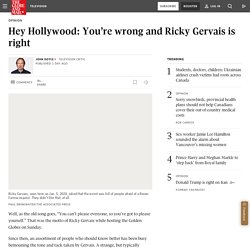 That was the motto of Ricky Gervais while hosting the Golden Globes on Sunday. Documenting the Filmmaker: Lucia Small Talks about Her Collaborative Film with Ed Pincus. Lucia Small and Ed Pincus (Photo by Danielle Morgan) Documentary | Filmmaking | Interviews | Massachusetts. 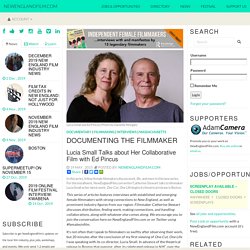 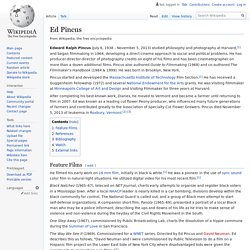 He has producer-director-director of photography credits on eight of his films and has been cinematographer on more than a dozen additional films. Pincus also authored Guide to Filmmaking (1968) and co-authored The Filmmaker's Handbook (1984 & 1999). He was born in Brooklyn, New York. Pincus started and developed the Massachusetts Institute of Technology Film Section.[1] He has received a Guggenheim Fellowship (1972) and several National Endowment for the Arts grants. History of evolutionary thought. The history of evolutionary thought in biology Following the establishment of evolutionary biology, studies of mutation and genetic diversity in natural populations, combined with biogeography and systematics, led to sophisticated mathematical and causal models of evolution. Paleontology and comparative anatomy allowed more detailed reconstructions of the evolutionary history of life. After the rise of molecular genetics in the 1950s, the field of molecular evolution developed, based on protein sequences and immunological tests, and later incorporating RNA and DNA studies.

Antiquity[edit] Greeks[edit] Bechdel test. A measure of the representation of women in fiction The Bechdel test ( BEK-dəl),[1] also known as the Bechdel–Wallace test,[2] is a measure of the representation of women in fiction. It asks whether a work features at least two women who talk to each other about something other than a man. The requirement that the two women must be named is sometimes added.[3] About half of all films meet these criteria, according to user-edited databases and the media industry press. Passing or failing the test is not necessarily indicative of how well women are represented in any specific work. The test is named after the American cartoonist Alison Bechdel in whose comic strip Dykes to Watch Out For the test first appeared in 1985. History[edit] Gender portrayal in popular fiction[edit] Female and male characters in film, according to four studies. This Movie Changed Me Newsletter. This Movie Changed Me is our podcast about how movies teach, connect, and transform us.

This fall, we’re introducing a new accompanying newsletter for listeners. Each Wednesday while the season is airing (starts Tuesday, Sept. 3), you’ll get a note from host Lily Percy along with a synopsis for the week’s movie, reviews, artwork, trailers, and more. Sign up to enhance your listening experience (and to make sure you don’t miss out on the occasional giveaway). By filling out this form, you consent to hear from The On Being Project via email. Studio system. The studio system (which was used during a period known as the Golden Age of Hollywood) is a method of film production and distribution dominated by a small number of "major" studios in Hollywood. Although the term is still used today as a reference to the systems and output of the major studios, historically the term refers to the practice of large motion picture studios between the 1920s and 1960s of (a) producing movies primarily on their own filmmaking lots with creative personnel under often long-term contract, and (b) dominating exhibition through vertical integration, i.e., the ownership or effective control of distributors and exhibition, guaranteeing additional sales of films through manipulative booking techniques such as block booking.

Barry Lyndon. 1975 film by Stanley Kubrick The film's cinematography has been described as ground-breaking. Filmworker. How the TCM festival brings Old Hollywood to life for four days – and makes it more inclusive. Since it launched as a network 25 years ago this week, Turner Classic Movies has been dedicated to carrying the torch for classic cinema.

When they launched their now annual film festival ten years ago, they sought to double down on that in an even more experiential way – by literally bringing a semblance of Old Hollywood to life in the spaces it once existed for four days every spring. Paris When It Sizzles. 1964 film directed by Richard Quine Paris When It Sizzles is a 1964 American romantic comedy film directed by Richard Quine, and produced by Quine and George Axelrod. The Uncanny Valleys of Martin Scorsese's The Irishman. Dancing Mad. Sleeper hit. Sleeper hit is a term used in the entertainment industry for a film that plays successfully for a long period and becomes a big success, despite having relatively little promotion or lacking a successful opening. Blockbuster (entertainment) Jonathan Frid. Canadian actor. Legality and Morality Surrounding CGI James Dean – Backlots.

Since my coverage of the Olivia de Havilland case against FX, I’ve become quite interested in Hollywood intellectual property law and its modern and historical applications. The Comedy Man. Trouble Every Day (film)