Chinatown. Described by its director as a “traditional detective story with a new, modern shape,” this 1930s thriller garnered 11 Academy Award nominations. 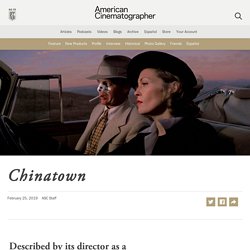 By John A. Alonzo, ASC EDITOR’S NOTE: Originally assigned as director of photography on Chinatown, Stanley Cortez, ASC participated fully in the preproduction preparation of the photographic aspects of the film. After having completed the photography on approximately 16 sequences of the feature during its first weeks of production, Mr. Cortez resigned from his Chinatown assignment.

Unusually enough, Chinatown was one of the very few pictures I’ve photographed that offered me absolutely no opportunity for advance preparation. I had been getting ready to do a pilot film starring Cicely Tyson, with whom I made Sounder. That very afternoon — it was a Thursday — Bob Evans (producer of Chinatown) and “Doc” Erickson (associate producer/unit production manager) asked me to come over to Paramount to discuss shooting a picture for them. 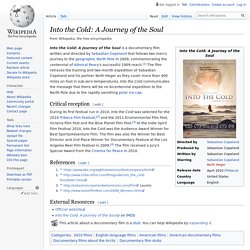 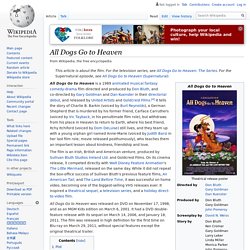 Barkin (voiced by Burt Reynolds), a German Shepherd that is murdered by his former friend, Carface Carruthers (voiced by Vic Tayback, in his penultimate film role), but withdraws from his place in Heaven to return to Earth, where his best friend, Itchy Itchiford (voiced by Dom DeLuise) still lives, and they team up with a young orphan girl named Anne-Marie (voiced by Judith Barsi in her last film role; movie released posthumously), who teaches them an important lesson about kindness, friendship and love. All Dogs Go to Heaven was released on DVD on November 17, 1998, and as an MGM Kids edition on March 6, 2001. Plot[edit] In 1939 New Orleans, Charlie B. Voice cast[edit] The Strange Thing About the Johnsons. 2011 short film directed by Ari Aster The Strange Thing About the Johnsons is a 2011 American short film written and directed by Ari Aster.[1][2] The film stars Billy Mayo, Brandon Greenhouse, and Angela Bullock as members of a suburban family in which the son is involved in an abusive incestuous relationship with his father. 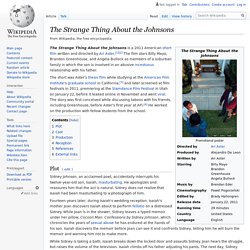 The Oscar (film) As movie star Frankie Fane (Boyd) is about to hear if he won a best acting Oscar, his friend Hymie Kelly (Bennett) reminisces about Fane's struggle to the top, beginning as a spieler for his stripper girlfriend Laurel (St. 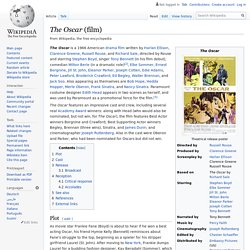 John). After moving to New York, Frankie dumps Laurel for a budding fashion designer, Kay Bergdahl (Sommer), which leads to a chance meeting with talent scout Sophie Cantaro (Parker). Sophie arranges for him to be signed with agent "Kappy" Kapstetter (Berle) and brings Frankie to Hollywood, where he quickly becomes a rising star. At each turn, Fane is an unprincipled heel, using and hurting others and causing them to recoil from him. He impulsively persuades Kay to marry him in Tijuana, but treats her cruelly thereafter. In order to ensure his victory, he secretly employs the services of a crooked private investigator (Borgnine), who leaks information that should influence voters to sympathize with Fane and support his Oscar candidacy. Rotten Tomatoes stated: Happiness (1998 film) 1998 American comedy-drama film by Todd Solondz Trish Maplewood, the eldest Jordan sister, is an upper middle class housewife married to psychiatrist Bill Maplewood and has three children. 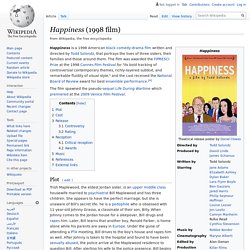 She appears to have the perfect marriage, but she is unaware of Bill's secret life: he is a pedophile who is obsessed with 11-year-old Johnny Grasso, a classmate of their son, Billy. When Johnny comes to the Jordan house for a sleepover, Bill drugs and rapes him. Later, Bill learns that another boy, Ronald Farber, is home alone while his parents are away in Europe.

Under the guise of attending a PTA meeting, Bill drives to the boy's house and rapes him as well. Portrait of a Lady on Fire. 2019 film Portrait of a Lady on Fire was selected to compete for the Palme d'Or at the 2019 Cannes Film Festival.[4][5] The film won the Queer Palm at Cannes, becoming the first film directed by a woman to win the award.[6] Sciamma also won the award for Best Screenplay at Cannes.[1][7][8] The film was theatrically released in France on 18 September 2019.[9] It was nominated for Independent Spirit Awards, Critics' Choice Awards and Golden Globe Awards for Best Foreign Language Film and was chosen by the National Board of Review as Top Five Foreign Language Films of 2019. 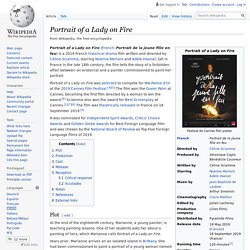 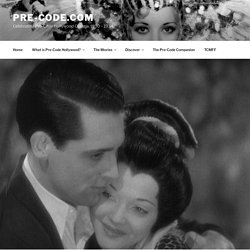 Sure, it’s bigamy. It’s big of them too! (ugh) “Before kiss, I love you. Now I know I love you for always.” Hahaha, what is this white nonsense. Charlie's Angels (2000 film) 2000 film directed by McG It was released on November 3, 2000, in the United States by Sony Pictures Releasing under its Columbia Pictures label, and has grossed $264 million worldwide. 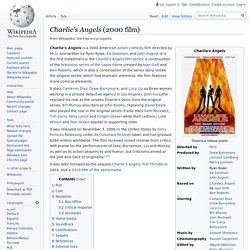 The film received mixed reviews from critics, with praise for the performances of Diaz, Barrymore, Liu and Murray as well as its action sequences and humor, but criticisms aimed at the plot and "lack of originality". Charlie assigns the Angels to find Eric Knox (Sam Rockwell), a software genius who created a revolutionary voice-recognition system and heads his own company, Knox Enterprises. A Bridge Too Far (film)

1977 film by Richard Attenborough The British are to land using gliders near Arnhem. 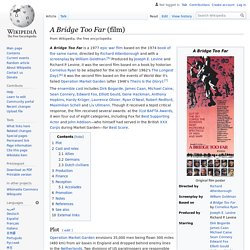 When General Urquhart briefs his officers, some of them are surprised they are going to attempt a landing so far from the bridge. The consensus among the British top brass is that resistance will consist entirely of "Hitler Youth or old men on bicycles". Although reconnaissance photos show German tanks at Arnhem, General Browning dismisses them and also ignores reports from the Dutch underground. He does not want to be the one to tell Field Marshal Montgomery of any doubts since many previous airborne operations had been cancelled. Medium Cool. The movie was met with widespread acclaim from numerous critics, including Roger Ebert and Gene Siskel of Siskel & Ebert, both calling the movie a "well-crafted masterpiece.

" The movie was also named one of the greatest movies of 1969, as well as one of the most influential movies in the New Hollywood movement. Robert Forster was also met with universal acclaim for his performance. In 2003, the film was selected for preservation in the United States National Film Registry by the Library of Congress as being "culturally, historically, or aesthetically significant".

Plot[edit] John Cassellis is a television news cameraman. Memories of Murder. Memories of Murder (Korean: 살인의 추억; RR: Sarinui chueok) is a 2003 South Korean crime drama film[2] co-written and directed by Bong Joon-ho. It is based on the true story of Korea's first serial murders in history, which took place between 1986 and 1991 in Hwaseong, Gyeonggi Province. Song Kang-ho and Kim Sang-kyung star as Detective Park and Detective Seo, respectively, two of the detectives trying to solve the crimes.

Plot[edit] In October 1986, two women are found raped and murdered in a ditch near a field. Local detective Park Doo-man, not having dealt with such a serious case before, is overwhelmed; key evidence is improperly collected, the police's investigative methods are suspect, and their forensic technology is near non-existent. Seo Tae-yoon, a detective from Seoul, volunteers to assist them. At the latest crime scene, Park, Cho and Seo all arrive to investigate in different ways, but then a local man arrives, pulls out undergarments, and masturbates in a woman's red lingerie. Where the Green Ants Dream.

Where the Green Ants Dream (German: Wo die grünen Ameisen träumen) is a 1984 film directed by Werner Herzog. Based partly on the Milirrpum v Nabalco Pty Ltd case and making use of professional actors as well as Aboriginal activists who were involved in the case, it was a mix of facts and fiction. Last Summer. Plot[edit] While spending the summer on Fire Island, Peter and Dan, two adolescent boys from upper-middle-class families, meet Sandy, a young girl who has found a wounded seagull on the beach. After the boys remove a fishhook from the bird's throat, the three youngsters become fast friends and spend all their time together, swimming, boating, smoking marijuana and cautiously experimenting with their awakening sexual impulses during visits to a movie house on the mainland.

One afternoon they are joined by Rhoda, a plump 15-year-old who is anxious to make friends. When the boys discover that Sandy has brutally killed the gull for biting her, Peter begins to shift his attention to Rhoda. Finding it fun to taunt Rhoda about her inexperience with boys, Sandy gets Peter and Dan to persuade the reluctant Rhoda to take her place, and all four go to a restaurant to meet the shy Puerto Rican, Anibal. Miss Americana. 2020 documentary film starring Taylor Swift Miss Americana (also known as Taylor Swift: Miss Americana) is a 2020 documentary film, directed by Lana Wilson, that follows American singer-songwriter Taylor Swift and her life over the course of several years of her career.[1][2] It was released on Netflix and in select theaters on January 31, 2020.

Netflix described the film as a "raw and emotionally revealing look" at Swift "during a transformational period in her life as she learns to embrace her role not only as a songwriter and performer, but as a woman harnessing the full power of her voice".[3] Miss Americana debuted at the opening night of 2020 Sundance Film Festival to critical acclaim, on January 23, 2020.[4][5] After its release, it became the highest-rated Netflix original biographical documentary film by an artist in IMDb history.[6] Synopsis[edit] Cast[edit] Background[edit] Cross of Iron. An international co-production between British and West German financiers, the film's exteriors were shot on location in Yugoslavia. Get Yourself a College Girl. Wild Wild Winter.

Faces (1968 film) First Reformed. Marriage Story (2019 film) Blossoms in the Dust. A Hidden Life (2019 film) Manchester by the Sea (film) Inside Llewyn Davis. The Gospel According to St. Matthew (film) A Serious Man. Mother! 2020 Golden Globes: What to Expect at the Awards Show Tonight. They Shall Not Grow Old. Synecdoche, New York. My favourite film: The Big Lebowski. National Lampoon's Christmas Vacation. My Cousin Vinny. The Usual Suspects. It's Pat. The Ladies Man (2000 film) Coneheads (film) The Naked Gun. The Naked Gun: From the Files of Police Squad! The Party (1968 film) Son of the Pink Panther.

9 to 5 (film) The Irishman (2019 film) Jar Jar Binks. Ferris Bueller’s Day Off - You Think You Know Movies? Everything Wrong With Jurassic Park III In 15 Minutes Or Less. The Room (Tommy Wiseau) The Hottie And The Nottie. Movie Review #JPMN. Jupiter Ascending.