What Did Clinton Mean When She Said Snowden Files Fell Into the “Wrong Hands”? Hillary Clinton asserted at Tuesday night’s Democratic presidential debate that NSA whistleblower Edward Snowden “stole very important information that has unfortunately fallen into a lot of the wrong hands.” 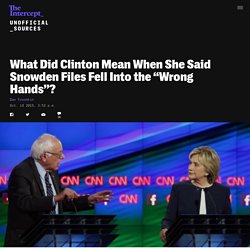 She seemed to be darkly intimating that the information Snowden gave to journalists in Hong Kong before he was granted asylum in Moscow also ended up with the Chinese and/or Russian governments. But that conclusion is entirely unsupported by the evidence; it’s a political smear that even the most alarmist Obama administration intelligence officials have not asserted as fact. As Snowden has repeatedly explained, after turning over copies of the heavily encrypted files to reporters, he destroyed his own before he left Hong Kong. He did not take the files to Russia “because it wouldn’t serve the public interest,” he told the New York Times in 2013. “There’s a zero percent chance the Russians or Chinese have received any documents,” he said. Or did she mean us? Vermont Sen. A Q&A with NSA whistleblower Edward Snowden. This week, I interviewed NSA whistleblower Edward Snowden for the Electronic Frontier Foundation’s Pioneer Awards, an event that recognizes those protecting freedom on the Internet. 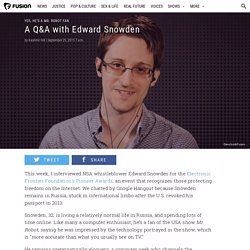 We chatted by Google Hangout because Snowden remains in Russia, stuck in international limbo after the U.S. revoked his passport in 2013. Snowden, 32, is living a relatively normal life in Russia, and spending lots of time online. Like many a computer enthusiast, he’s a fan of the USA show Mr. Robot, saying he was impressed by the technology portrayed in the show, which is “more accurate than what you usually see on TV.” He remains preternaturally eloquent, a computer geek who channels the founding fathers, regularly peppering his conversation with sayings like, “What people describe as privacy is actually liberty.” This is our conversation, condensed and edited for clarity. KH: In the first photos of you that appeared online, you had Tor and EFF stickers on your laptop.

ES: I was a member. Edward Snowden: Here's how we take back the Internet.

Can Snowden get a Fair Trial?

Edward Snowden: ‘The World Is Much More Unpredictable and Dangerous’ Than George Orwell’s ‘1984’ Partial Disclosure by Sue Halpern. No Place to Hide: Edward Snowden, the NSA, and the US Surveillance State by Glenn Greenwald Metropolitan, 259 pp., $27.00 The Snowden Files: The Inside Story of the World’s Most Wanted Man by Luke Harding Vintage, 346 pp., $14.95 (paper) United States of Secrets a Frontline documentary directed by Michael Kirk The NSA Report: Liberty and Security in a Changing World by the President’s Review Group on Intelligence and Communications Technologies: Richard A. 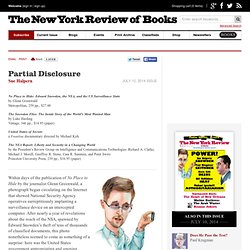 Princeton University Press, 239 pp., $16.95 (paper) Within days of the publication of No Place to Hide by the journalist Glenn Greenwald, a photograph began circulating on the Internet that showed National Security Agency operatives surreptitiously implanting a surveillance device on an intercepted computer.

That photo itself was part of the Snowden cache, and readers of Greenwald’s book were treated to the NSA’s own caption: “Not all SIGINT tradecraft involves accessing signals and networks from thousands of miles away,” it said. The Germany File of Edward Snowden Documents Available for Download. America's National Security Agency has been active in Germany for decades. 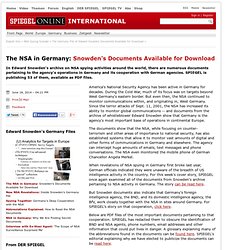 During the Cold War, much of its focus was on targets beyond West Germany's eastern border. But even then, the NSA continued to monitor communications within, and originating in, West Germany. Four ways Edward Snowden changed the world – and why the fight's not over. Thursday marks one year since the Guardian published the first in a series of eye-opening stories about surveillance based on documents provided by Edward Snowden. 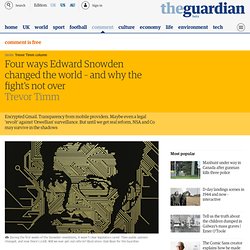 The events in the 52 weeks since have proven him to be the most significant whistleblower in American history – and have reverberated throughout the world. But along with the changes Snowden sparked, vital questions remain about how and if the National Security Agency and its global spy apparatus will truly be reformed. Many wheels are finally in motion, but will the US Congress and the courts actually respond in a meaningful way? In truth, the second year of Snowden may be more important than the first. It's when we'll see if global privacy rights get protected for the better – or if mass surveillance becomes more entrenched in our laws than ever before. The internet companies: more transparency, but little lobbying for reform The telecommunications companies, most notably AT&T and Verizon, have always been the true problem. Edward Snowden's statement in support of Reset the Net - Reset The Net.