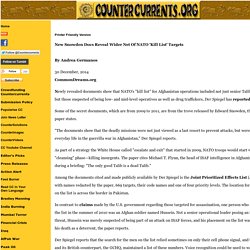 Some of the secret documents, which are from 2009 to 2011, are from the trove released by Edward Snowden, the German paper states. "The documents show that the deadly missions were not just viewed as a last resort to prevent attacks, but were in fact part of everyday life in the guerrilla war in Afghanistan," Der Spiegel reports. 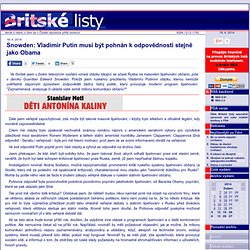 What Europe Should Know About US Mass Surveillance By Edward Snowden 07 March, 2014CommonDreams.org Whistleblower Edward Snowden delivers written testimony to European Parliament What follows is a statement addressed to an investigative panel of the European Parliament looking into the nature and scope of U.S. surveillance conducted by the National Security Agency and its partner agencies in Europe. 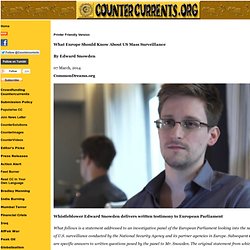 Subsequent to the statement are specific answers to written questions posed by the panel to Mr. Introductory Statement. Printing: US Threats Mount Against Journalists, Snowden. At a hearing of the House Intelligence Committee, Chairman Mike Rogers (R,Mich) repeatedly suggested that journalists who received leaked NSA documents from Snowden and wrote articles about them were guilty of criminal acts. 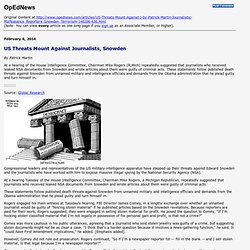 However, Comey did not rule out prosecution. Army Lt. The DNI report now lists terrorism only third in its list of threats. A History of 'Fear' NSA Headquarters, Fort Meade, Maryland(image by National Security Agency photo) 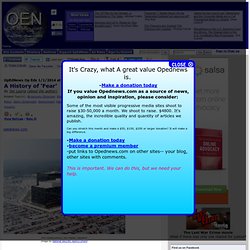 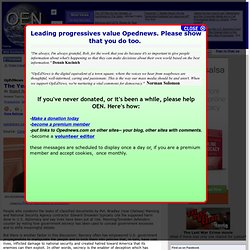 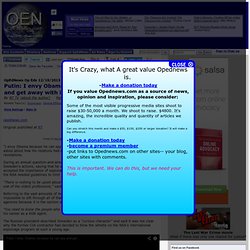 During an annual question-and-answer session with journalists, Putin praised Edward Snowden's actions, saying that he was working for a "noble cause. " At the same time he accepted the importance of espionage programs in the fight against global terrorism, but said the NSA needed guidelines to limit its powers. Edward Snowden. Edward Snowden : The Greatest Human Rights Challenge Of Our Time. The Greatest Human Rights Challenge Of Our Time An Open Letter to the People of Brazil By Edward Snowden December 17, 2013 "Information Clearing House - Six months ago, I stepped out from the shadows of the United States Government's National Security Agency to stand in front of a journalist's camera. 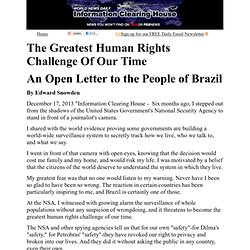 I shared with the world evidence proving some governments are building a world-wide surveillance system to secretly track how we live, who we talk to, and what we say. I went in front of that camera with open eyes, knowing that the decision would cost me family and my home, and would risk my life. My greatest fear was that no one would listen to my warning. At the NSA, I witnessed with growing alarm the surveillance of whole populations without any suspicion of wrongdoing, and it threatens to become the greatest human rights challenge of our time.

When someone in Florianopolis visits a website, the NSA keeps a record of when it happened and what you did there. Copyright Folha de S.Paulo. Shooting the Messenger - Chris Hedges. Shooting the Messenger Posted on Dec 8, 2013 By Chris Hedges There is a deeply misguided attempt to sacrifice Julian Assange, WikiLeaks, Chelsea Manning and Jeremy Hammond on the altar of the security and surveillance state to justify the leaks made by Edward Snowden. 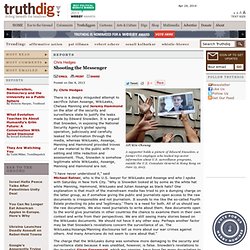 It is argued that Snowden, in exposing the National Security Agency’s global spying operation, judiciously and carefully leaked his information through the media, whereas WikiLeaks, Assange, Manning and Hammond provided troves of raw material to the public with no editing and little redaction and assessment. Thus, Snowden is somehow legitimate while WikiLeaks, Assange, Manning and Hammond are not. “I have never understood it,” said Michael Ratner, who is the U.S. lawyer for WikiLeaks and Assange and who I spoke with Saturday in New York City. The charge that the WikiLeaks dump was somehow more damaging to the security and surveillance state because it was unedited, however, is false. Shooting the Messenger. Source: Truthdig Protesters supporting Edward Snowden hold a photo of him during a demonstration outside the U.S. 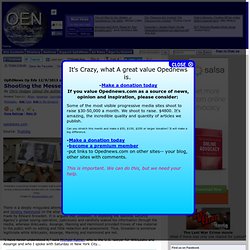