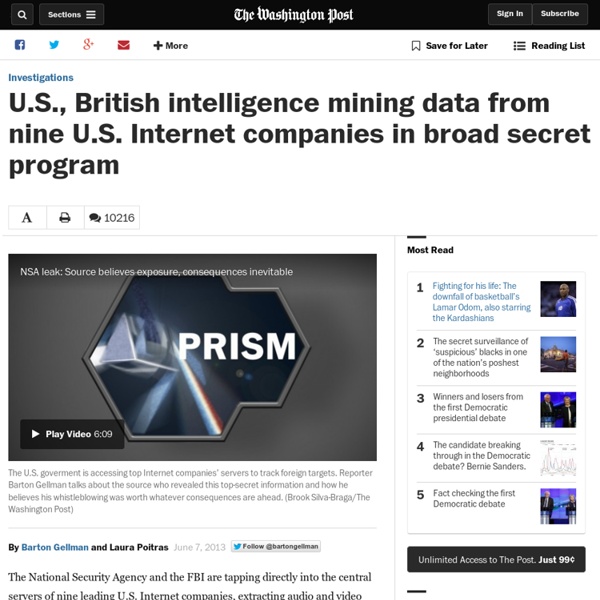 The National Security Agency and the FBI are tapping directly into the central servers of nine leading U.S. Internet companies, extracting audio and video chats, photographs, e-mails, documents, and connection logs that enable analysts to track foreign targets, according to a top-secret document obtained by The Washington Post. The program, code-named PRISM, has not been made public until now. It may be the first of its kind. Equally unusual is the way the NSA extracts what it wants, according to the document: “Collection directly from the servers of these U.S. London’s Guardian newspaper reported Friday that GCHQ, Britain’s equivalent of the NSA, also has been secretly gathering intelligence from the same internet companies through an operation set up by the NSA. PRISM was launched from the ashes of President George W. The court-approved program is focused on foreign communications traffic, which often flows through U.S. servers even when sent from one overseas location to another.

NSA Prism program taps in to user data of Apple, Google and others The National Security Agency has obtained direct access to the systems of Google, Facebook, Apple and other US internet giants, according to a top secret document obtained by the Guardian. The NSA access is part of a previously undisclosed program called Prism, which allows officials to collect material including search history, the content of emails, file transfers and live chats, the document says. The Guardian has verified the authenticity of the document, a 41-slide PowerPoint presentation – classified as top secret with no distribution to foreign allies – which was apparently used to train intelligence operatives on the capabilities of the program. The document claims "collection directly from the servers" of major US service providers. Although the presentation claims the program is run with the assistance of the companies, all those who responded to a Guardian request for comment on Thursday denied knowledge of any such program. An Apple spokesman said it had "never heard" of Prism.

NSA collecting phone records of millions of Verizon customers daily | World news The National Security Agency is currently collecting the telephone records of millions of US customers of Verizon, one of America's largest telecoms providers, under a top secret court order issued in April. The order, a copy of which has been obtained by the Guardian, requires Verizon on an "ongoing, daily basis" to give the NSA information on all telephone calls in its systems, both within the US and between the US and other countries. The document shows for the first time that under the Obama administration the communication records of millions of US citizens are being collected indiscriminately and in bulk – regardless of whether they are suspected of any wrongdoing. The secret Foreign Intelligence Surveillance Court (Fisa) granted the order to the FBI on April 25, giving the government unlimited authority to obtain the data for a specified three-month period ending on July 19. The unlimited nature of the records being handed over to the NSA is extremely unusual.

Through a PRISM darkly: Tracking the ongoing NSA surveillance story It was a relatively quiet week for internet news until Guardian blogger Glenn Greenwald dropped a bombshell on Thursday, with a story that showed the National Security Agency was collecting data from Verizon thanks to a secret court order. But that was just the beginning: the Washington Post later revealed an even broader program of surveillance code-named PRISM, which involved data collection from the web’s largest players — including Google, Facebook and Apple — and then the Wall Street Journal said data is also being gathered from ISPs and credit-card companies. This story is moving so quickly that it is hard to keep a handle on all of the developments, not to mention trying to follow the denials and non-denials from those who are allegedly involved, and the threads that tie this particular story to the long and sordid history of the U.S. government’s surveillance of its own citizens. The Guardian leak The leak widens The Washington Post leak The ongoing fallout Zuckerberg denial

NSA surveillance: The US is behaving like China | Ai Weiwei Even though we know governments do all kinds of things I was shocked by the information about the US surveillance operation, Prism. To me, it's abusively using government powers to interfere in individuals' privacy. This is an important moment for international society to reconsider and protect individual rights. I lived in the United States for 12 years. In our experience in China, basically there is no privacy at all – that is why China is far behind the world in important respects: even though it has become so rich, it trails behind in terms of passion, imagination and creativity. Of course, we live under different kinds of legal conditions – in the west and in developed nations there are other laws that can balance or restrain the use of information if the government has it. But still, if we talk about abusive interference in individuals' rights, Prism does the same. During my detention in China I was watched 24 hours a day. But the guards whispered to me.

White House Defends Phone-Record Tracking as 'Critical Tool' WASHINGTON—The National Security Agency's monitoring of Americans includes customer records from the three major phone networks as well as emails and Web searches, and the agency also has cataloged credit-card transactions, said people familiar with the agency's activities. The disclosure this week of an order by a secret U.S. court for Verizon Communications Inc. VZ -0.35 % 's phone records set off the latest public discussion of the program. But people familiar with the NSA's operations said the initiative also encompasses phone-call data from AT&T Inc. T -0.45 % and Sprint Nextel Corp. The agency is using its secret access to the communications of millions of Americans to target possible terrorists, said people familiar with the effort. The NSA's efforts have become institutionalized—yet not so well known to the public—under laws passed in the wake of the Sept. 11, 2001, attacks. Civil-liberties advocates slammed the NSA's actions. But Sen. Sen.

What, let gays get married? We must be bonkers - Comment - Voices Similarly, Hitler and Eva Braun’s marriage didn’t lessen the sanctity of heterosexual blessings, because whatever else, their ceremony in the bunker was healthy and natural and not all icky and weird. But now gays can get married, the offices at Relate will be bursting. Couples will have to be seen six at a time to fit them all in. “Our marriage seems pointless now,” they’ll whimper. “Now gays can get married, we spend every evening shooting each other with air rifles and we’ve put our kids into care.” This is the latest of a long line of things we can no longer enjoy because gays are allowed to do them as well. For some, it’s even more serious. Several MPs opposed to gay marriage asked, “Where will this lead next?” And there’s no greater sign of a community behaving aggressively than when it asks to be allowed to get married. “Yes, dear.

Doublespeak Denials Of PRISM Hid The Truth About Participation “Direct Access” didn’t mean no access. “Back door” didn’t mean no door. “Only in accordance with the law” didn’t mean PRISM is illegal. And you didn’t need to have heard of a codename to have participated. Larry, Zuck, you didn’t spell out your denials of the NSA’s data spying program in plain English, and now we know why. [Update: This article and its headline have been edited, see explanation below.] The New York Times says you knowingly participated in the NSA’s data monitoring program. But you were probably cornered by Foreign Intelligence Surveillance Act restrictions about what you could say about PRISM. Sadly, you really were working with the NSA to give it access to our private data, so your supposedly candid statements full of technicalities just broke our hearts, as the truth has come to light. The terms you used disguised what was going on. Now these excuses ring hollow. That’s a threat to your business, and our way of life. [Image Credit]

Jeroen Wollaars PRISM revelations result in lost business for US cloud companies The revelations about the National Security Agency’s (NSA) broad monitoring of traffic and access to the data of cloud providers spurred by the actions of former NSA contractor Edward Snowden may or may not have hurt national security, depending on who you ask. But according to a recent survey by the industry organization Cloud Security Alliance (CSA), the exposure of NSA’s PRISM program is having a very real impact on the bottom line of US cloud service providers in the form of lost overseas customers. Concerns about NSA surveillance are hardly new. Two years ago, I was interviewing the CIO of a major Canadian healthcare organization for a story on cloud computing, and asked if he had considered using US cloud providers or software-as-a-service. At the time, the concern might have sounded a bit paranoid. The PRISM revelations are also making it harder for US companies to get new business abroad. Concerns about government access to cloud data weren’t limited to the US alone.

GCHQ accused of monitoring privileged emails between lawyers and clients | UK news GCHQ is probably intercepting legally privileged communications between lawyers and their clients, according to a detailed claim filed on behalf of eight Libyans involved in politically sensitive compensation battles with the UK. The accusation has been lodged with Britain's most secret court, the investigatory powers tribunal (IPT), which examines complaints about the intelligence services and government use of covert surveillance. Most of its hearings are in private. The allegation has emerged in the wake of the Guardian's revelations about extensive monitoring by GCHQ of the internet and telephone calls, chiefly through its Tempora programme. The system taps directly into fibre optic cables carrying the bulk of online exchanges transiting the UK and enables intelligence officials to screen vast quantities of data. The eight Libyans, members of two families now living in the country's capital, Tripoli, say they were victims of rendition.

David Cameron makes veiled threat to media over NSA and GCHQ leaks | World news David Cameron has called on the Guardian and other newspapers to show "social responsibility" in the reporting of the leaked NSA files to avoid high court injunctions or the use of D notices to prevent the publication of information that could damage national security. In a statement to MPs on Monday about last week's European summit in Brussels, where he warned of the dangers of a "lah-di-dah, airy-fairy view" about the dangers of leaks, the prime minister said his preference was to talk to newspapers rather than resort to the courts. But he said it would be difficult to avoid acting if newspapers declined to heed government advice. The prime minister issued the warning after the Tory MP Julian Smith quoted a report in Monday's edition of the Sun that said Britain's intelligence agencies believed details from the NSA files leaked by the US whistleblower Edward Snowden had hampered their work. "I don't want to have to use injunctions or D notices or the other tougher measures.