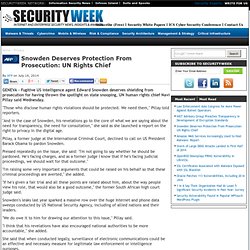 "Those who disclose human rights violations should be protected. We need them," Pillay told reporters. "And in the case of Snowden, his revelations go to the core of what we are saying about the need for transparency, the need for consultation," she said as she launched a report on the right to privacy in the digital age. Pillay, a former judge at the International Criminal Court, declined to call on US President Barack Obama to pardon Snowden. 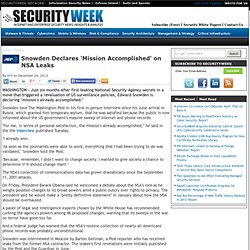 " Snowden told The Washington Post in his first in-person interview since his June arrival in Russia, which granted him temporary asylum, that he was satisfied because the public is now informed about the US government's massive sweep of Internet and phone records. "For me, in terms of personal satisfaction, the mission's already accomplished," he said in the the interview published Tuesday. "I already won. "As soon as the journalists were able to work, everything that I had been trying to do was validated," Snowden told the Post.

"Because, remember, I didn't want to change society. The NSA's collection of communications data has grown dramatically since the September 11, 2001 attacks. Snowden 'Wears Disguise, in Danger': Lawyer. MOSCOW - US intelligence leaker Edward Snowden is living under guard at a secret address in Russia and sometimes emerges in disguise, although he remains in such danger that even a family visit could jeopardise his security, his lawyer said Monday. 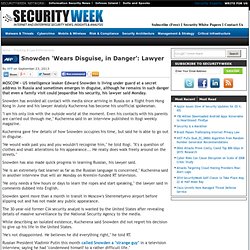 Snowden Effect is Adverse to his Intentions. Edward Snowden did not restart a cold war nor did he change the reality of international politics. 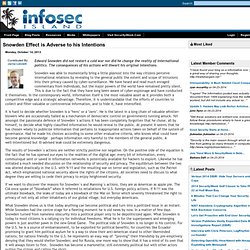 The consequences of his actions will thwart his original intentions. Snowden was able to momentarily bring a little glasnost into the way citizens perceive international relations by revealing to the general public the extent and scope of intrusions Into their privacy caused by cyber-surveillance. We have heard and read much enraged commentary from individuals, but the major powers of the world have remained pretty silent. This is due to the fact that they have long been aware of cyber-espionage and have conducted it themselves. 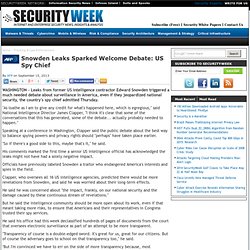 "As loathe as I am to give any credit for what's happened here, which is egregious," said National Intelligence Director James Clapper, "I think it's clear that some of the conversations that this has generated, some of the debate... actually probably needed to happen. " Snowden outs NSA’s “Follow The Money” international banking spies.

According to a new report, referencing leaks from Edward Snowden, the National Security Agency (NSA) has been widely monitoring international banking and credit card transactions. 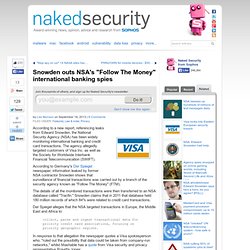 The agency allegedly targeted customers of Visa Inc. as well as the Society for Worldwide Interbank Financial Telecommunication (SWIFT). According to Germany's Der Spiegel newspaper, information leaked by former NSA contractor Snowden shows that surveillance of financial transactions was carried out by a branch of the security agency known as "Follow The Money" (FTM). The details of all the monitored transactions were then transferred to an NSA database called "Tracfin. " Snowden claims that in 2011 that database held 180 million records of which 84% were related to credit card transactions. 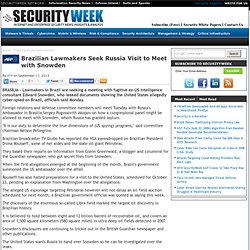 Foreign relations and defense committee members will meet Tuesday with Russia's Ambassador in Brasilia Sergey Pogossovith Akopov on how a congressional panel might be allowed to meet with Snowden, whom Russia has granted asylum. "It is our duty to determine the true dimensions of (US spying) programs," said committee chairman Nelson Pellegrino. Brazilian broadcaster TV Globo has reported the NSA eavesdropped on Brazilian President Dilma Rousseff, some of her aides and the state oil giant Petrobras.

They based their reports on information from Glenn Greenwald, a blogger and columnist for the Guardian newspaper, who got secret files from Snowden. Snowden Nominated For Freedom of Thought Prize. US Says Snowden Leak on Code-breaking is 'Not News' WASHINGTON - Leaks revealing how American spies have circumvented encryption for online communications are "not news" because code-breaking is part of their job, US intelligence said Friday. 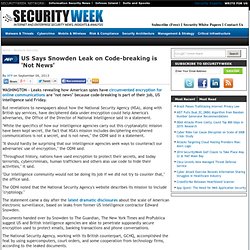 But revelations to newspapers about how the National Security Agency (NSA), along with British spy services, have deciphered data under encryption could help America's adversaries, the Office of the Director of National Intelligence said in a statement. "While the specifics of how our intelligence agencies carry out this cryptanalytic mission have been kept secret, the fact that NSA's mission includes deciphering enciphered communications is not a secret, and is not news," the ODNI said in a statement. US intelligence: Snowden's latest leaks 'road map' for adversaries. High performance access to file storage The US Office of the Director of National Intelligence (ODNI) has issued a response to the latest revelations from Edward Snowden with a warning that the information is "not news," but has nevertheless harmed the agency's ability to keep America and its allies safe. 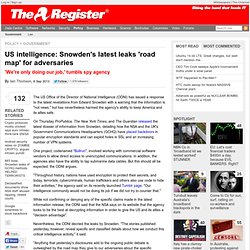 On Thursday ProPublica, The New York Times, and The Guardian released the latest dossier of information from Snowden, detailing how the NSA and the UK's Government Communications Headquarters (GCHQ) have placed backdoors in popular encryption standards and can exploit holes in SSL and an increasing number of VPN systems. One project, codenamed "Bullrun", involved working with commercial software vendors to allow direct access to unencrypted communications. In addition, the agencies also have the ability to tap submarine data cables. But this should all be expected, the ODNI argues. Snowden is a 'Strange Guy' Set for Tough Life: Putin. MOSCOW - Russian President Vladimir Putin said Wednesday US intelligence leaker Edward Snowden, who received asylum in Russia, is a "strange guy" who condemned himself to a difficult fate. 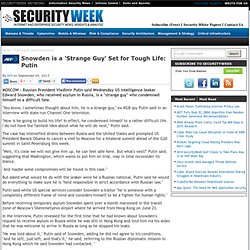 "You know, I sometimes thought about him, he is a strange guy," ex-KGB spy Putin said in an interview with state-run Channel One television. "How is he going to build his life? In effect, he condemned himself to a rather difficult life. I do not have the faintest idea about what he will do next," Putin said. The case has intensified strains between Russia and the United States and prompted US President Barack Obama to cancel a visit to Moscow for a bilateral summit ahead of the G20 summit in Saint Petersburg this week. "Well, it's clear we will not give him up, he can feel safe here. 'Classified' Material Seized from Miranda, UK Court Told. LONDON - Material seized from the partner of a Guardian journalist when he was detained at a British airport under anti-terror laws included information that was "misappropriated" and "classified", the High Court in London heard on Friday.

One file taken from David Miranda -- the Brazilian partner of Glenn Greenwald, who has worked with US intelligence leaker Edward Snowden on an explosive series of security services exposes -- included 58,000 "highly classified UK intelligence documents", a senior government intelligence advisor told judges. Oliver Robbins, deputy national security adviser for intelligence, security and resilience in the Cabinet Office ministry, outlined why security services and police needed to "make use" of the material seized when Miranda was detained for nine hours on August 18 at London Heathrow Airport.

U.S.-Russia feud over Snowden cuts both ways. Edward Snowden in Hong Kong. (Guardian ) NEW YORK — For a wanted man, Boris Kuznetsov leads a very open life. His address, in a high-rise apartment with a view of the Manhattan skyline, is public record. He regularly updates his Facebook page with personal information and musings about the news of the day, including his own criminal case. But Kuznetsov, a lawyer from Russia and a harsh critic of Russian President Vladimir Putin, doesn't worry about being arrested. "I feel absolutely secure here," said Kuznetsov, who is just as confident that as long as Putin is in charge, Russia will not send Snowden back to the United States. Other than mutual security in their adopted lands, Kuznetsov, 69, says he and Snowden, 30, have little in common.

NSA: We couldn't have stopped Snowden – he was A SYSADMIN. High performance access to file storage The US National Security Agency may have some of the most sophisticated cyber-surveillance programs in the world, but it was trivial for former NSA contractor Edward Snowden to walk off with sensitive data, sources say, owing to the agency's antiquated internal security. "The [Defense Department] and especially NSA are known for awesome cyber security, but this seems somewhat misplaced," former US security official Jason Healey told NBC News on Thursday. "They are great at some sophisticated tasks but oddly bad at many of the simplest. " NSA gets burned by a sysadmin, decides to burn 90% of its sysadmins. High performance access to file storage The NSA has announced its brainwave to end further leaks about its secret operations by disaffected employees: it will simply sack 90 per cent of all its sysadmins.

The US surveillance agency's spyboss General Keith Alexander told a computer security conference in New York that automating much of his organisation's work - such as snooping on anyone with an internet connection - will make it more secure. The inner workings of the NSA's massive PRISM and XKEYSCORE programmes were exposed to the world by Edward Snowden, an ex-CIA techie and NSA contractor who had access to highly classified material, along with about 1,000 other sysadmins. Gen Alexander said: "What we're in the process of doing - not fast enough - is reducing our system administrators by about 90 percent.

" Until now, the chief spook continued, the NSA has "put people in the loop of transferring data, securing networks and doing things that machines are probably better at doing". Snowden Spoofed Top Officials' Identity To Mine NSA Secrets. Why Snowden Doesn’t Have the Clouds Bursting in Air (to the Tune of $30 Billion) Since Edward Snowden started dishing on US intelligence practices, especially around the program known as PRISM, there have been folks spreading doom and gloom about public cloud. It’s all a rather silly bit of alarmist rhetoric that makes me want to twist a pun out of clouds and Chicken Little. I contend that this is a tempest in a teapot for some rather straightforward reasons. As a Canadian who has travelled in the US and Europe, spending most of my time interacting with other security folks and enterprise IT, I’m often in the position of straddling the European-US divide.

That divide has been a bit wider than simple geography since the Patriot Act. While concerns around the Patriot Act had lowered to a simmer in recent years, concerns about storing data on US territory were always there. Since the Patriot Act was adopted in 2001, non-US companies have tended to keep their data at home. The perceived risk is also centric to Western countries.

Snowden's secure email provider Lavabit shuts down under gag order. High performance access to file storage Lavabit, the security-conscious email provider that was the preferred email service of NSA leaker Edward Snowden, has closed its doors, citing US government interference. Thanks to a redaction blunder, it's now clear Snowden was the Feds' quarry in Lavabit case.