Earthquakes 101. Dam Effects. Soil Science Society of America. Wax Volcano in a Cup - Realistic Model Volcano. This wax and sand volcano is a realistic model volcano that is easy to make and erupts much like a real volcano. The volcano is extremely simple to make and interesting to watch. Wax "lava" forms a volcano in sand, eventually erupting into the atmosphere, which is water in this model. You can experiment with the amount of wax, quantity and type of sand and intensity of heat to form different types of volcanoes. How It Works A real volcano forms and erupts because molten rock (magma) and hot gases push up from the Earth's mantle into the crust. Wax Volcano Materials candle (wax) - try red or orange wax for realistic lava sand water heat-safe clear glass cup or glass Make the Volcano Light the candle (or otherwise heat the wax) to drip wax into the bottom of the cup.Cover the wax with a layer of sand. Blowing Up the Dam Video. Blowing Up the Dam Video. Volcanoes 101. Breathtaking Aerial Views of Niagara Falls. Niagara Falls - Flow Stopped,1969. Niagara Falls, Canada. Planbook > Week > PlanbookEdu.com. Continents-map-bigger-size.jpg (1800×1089) World's Twenty Longest Rivers.

Which Way Does a River Flow? Safety Sign Generator. The server is working. 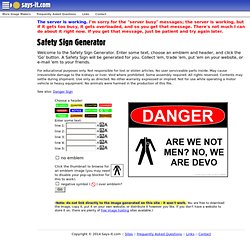 I'm sorry for the "server busy" messages; the server is working, but if it gets too busy, it gets overloaded, and so you get that message. There's not much I can do about it right now. If you get that message, just be patient and try again later. Welcome to the Safety Sign Generator. Safety Sign Generator. BBC One - Planet Earth, Deserts, Sahara sand storm. SAND BLASTING. Sandblasting heavy rust away. SAND BLASTING. Science Online Earth's Features. Hoover Dam Directions. National Geographic Education Video. What’s So Bad About Dams, Anyway? In our line of work removing old dams to restore rivers, one of the most common questions people ask is “what’s so bad about dams, anyway?” 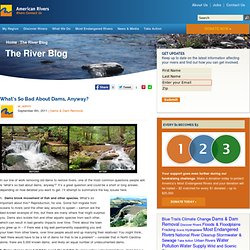 It’s a great question and could be a short or long answer, depending on how detailed you want to get. Why We Remove Dams. Colorado River Map. Balancing Limited Supply With Increasing Demand The Colorado River Basin is a critical component of North American water supply, providing H2O to 30 million people and thousands of acres of farmland. 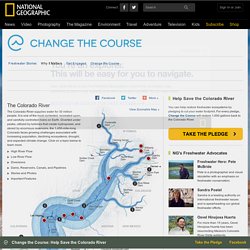 When Colorado River withdrawals were first allocated among the river basin’s seven states, in 1922, the river held 17.5 million acre-feet (5.7 trillion gallons) of water. However, new science has shown that 1922 was part of an especially wet period. The river now averages about 14.7 million acre-feet per year and is allocated among seven states and Mexico. Spectacular Time Lapse Dam "Removal" Video. National Geographic Freshwater 101: Rivers. Rivers and their tributaries are the veins of the planet, pumping freshwater to wetlands and lakes and out to sea. They flush nutrients through aquatic ecosystems, keeping thousands of species alive, and help sustain fisheries worth billions of dollars. Hydroelectricity. Electricity from Hydropower Hydropower is considered a renewable energy resource because it uses the Earth's water cycle to generate electricity. 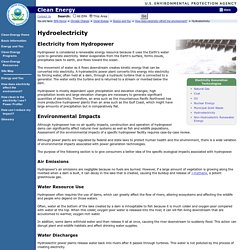 Water evaporates from the Earth's surface, forms clouds, precipitates back to earth, and flows toward the ocean. The movement of water as it flows downstream creates kinetic energy that can be converted into electricity. A hydroelectric power plant converts this energy into electricity by forcing water, often held at a dam, through a hydraulic turbine that is connected to a generator. Snake River Dam Operation. National Wildlife Federation et al. v. United States Army Corps of Engineers, 99-442-FR (D. Or.) The Snake River is the largest tributary of the Columbia River. Up to 45% of all Columbia Basin chinook salmon once hatched in the Snake River's tributaries. Millions of juvenile fish are carried by annual spring floods 600 miles to the Pacific Ocean; these same fish swim upstream as adults a year or two later to spawn and die, starting the cycle anew. March 2008 - Down with the Dams: Unchaining U.S. Rivers. Congress gets involved Oregon’s Marmot Dam serves as an experiment, showing what can happen when a large dam is removed from a river.

More than anything else, dams have changed the fluvial landscape of the United States. Dams interrupt and change the flow of rivers, as well as the movement of sediment, nutrients, organic materials and aquatic organisms. Nearly 80,000 large dams — those exceeding 7.6 meters high, storing more than 61,615 cubic meters of water behind them or those posing a significant hazard if they fail — have been constructed for hydropower, water supply and flood control since European settlement of North America, according to the U.S. Army Corps of Engineers National Dam Inventory. Minimizing Dam Impact on the Yangtze River. By Misty Herrin As China’s demand for energy skyrockets, so, too, does pressure to harness the power of the mighty Yangtze River. Twelve new dams are planned for the upper reaches of the Yangtze; three are already under construction.

While these dams will provide energy for millions, they will have serious impacts on ecosystems and the fish supplies that sustain the very same families. The Nature Conservancy is engaging with dam builders and public agencies to improve how the dams are designed and operated. "Maid of the Mist" - Niagara Falls. Niagara Falls (Horseshoe Falls, American Falls, Bridal Veil) in High Definition. Mt. St. Helens Eruption May 18, 1980 720p HD. Mount St. Helens Erupts — History.com Video.

Two years on at Chaitén « The Volcanism Blog. Posted by admin in Chaitén, Chile, eruptions, volcanoes. Tags: Chaitén, Chile, volcanic eruptions trackback View of Chaitén caldera and lava dome before the May 2008 eruption (© Eric Manríquez). The eruption of Chaitén volcano in southern Chile began two years ago today, on 2 May 2008. Volcano Eruption Mount St. Helens May 18, 1980 USGS. Mount St. Helens Disintegrates in Enormous Landslide. How to Glue Sand Castles. Sand Castle Mixture for Preschoolers Made With Glue and Sand.

New Page 1. Videos Soil Erosion by Wind and its Control Produced by USDA-ARS-EWERU for NRCS, 2003. 35. min. 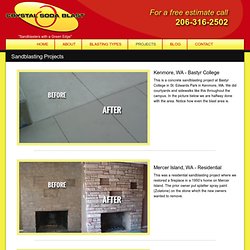 Edwards Park in Kenmore, WA. We did courtyards and sidewalks like this throughout the campus. In the picture below we are halfway done with the area. Notice how even the blast area is. Rivers - The Grand Canyon: How It Formed. Rivers - Physical Geography - Running Water: Erosion & Deposits. Weathering and Erosion Photos.