Vacuum energy. Vacuum energy is an underlying background energy that exists in space throughout the entire Universe. 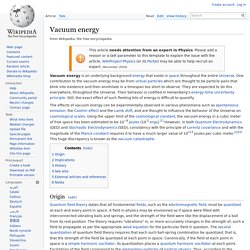 One contribution to the vacuum energy may be from virtual particles which are thought to be particle pairs that blink into existence and then annihilate in a timespan too short to observe. They are expected to do this everywhere, throughout the Universe. Their behavior is codified in Heisenberg's energy–time uncertainty principle. Still, the exact effect of such fleeting bits of energy is difficult to quantify. The effects of vacuum energy can be experimentally observed in various phenomena such as spontaneous emission, the Casimir effect and the Lamb shift, and are thought to influence the behavior of the Universe on cosmological scales. Origin[edit] Summing over all possible oscillators at all points in space gives an infinite quantity. Additional contributions to the vacuum energy come from spontaneous symmetry breaking in quantum field theory.

AbbottSciAm88. Astronomy Question: What is Outside of the Universe? Five weird theories of what lies outside the universe. We always have to deal with either there being a place where all existence stops, or infinity. If there are universes outside our universe, either THAT will go on infinitely, or there will be a point at which existence of some sort stops. Neither makes any rational sense. Same with time. Either it has a beginning and end, or it is infinite. If it has a beginning, then what happened before that? 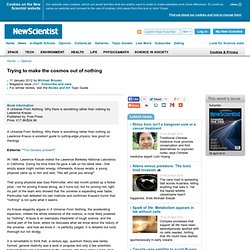 During his time there he gave a talk on his latest idea - that empty space might contain energy. Afterwards, Krauss recalls, a young physicist came up to him and said, "We will prove you wrong! " That young physicist was Saul Perlmutter, who last month picked up a Nobel prize - not for proving Krauss wrong, as it turns out, but for proving him right. As Krauss elegantly argues in A Universe From Nothing, the accelerating expansion, indeed the whole existence of the cosmos, is most likely powered by "nothing". 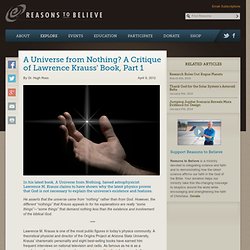 Krauss claims to have shown why the latest physics proves that God is not necessary to explain the universe’s existence and features. He asserts that the universe came from “nothing” rather than from God. However, the different “nothings” that Krauss appeals to for his explanations are really “some things”—“some things” that demand nothing less than the existence and involvement of the biblical God. Lawrence M. Krauss is one of the most public figures in today’s physics community. Figure: Geometry of the UniverseThe angular sizes of the hot (red and yellow) and cold (blue) spots in the cosmic microwave background radiation (left over from the cosmic creation event) reveal the geometry of the universe. 1. David J. Gross – Interviews. David Gross Answers Questions on the NobelPrize YouTube Channel The third in a series of Q&A sessions with Nobel Laureates on YouTube features David Gross, who received the Nobel Prize in Physics 2004 for discovering the workings of one of the four basic forces in nature, the strong force that holds atomic nuclei together. 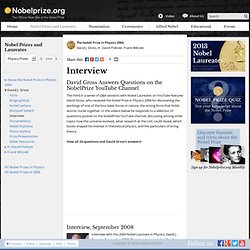 In the videos below he responds to a selection of questions posted on the NobelPrize YouTube channel, discussing among other topics how the universe evolved, what research at the LHC could reveal, which books shaped his interest in theoretical physics, and the particulars of string theory. View all 24 questions and David Gross's answers! Interview, September 2008 Interview with the 2004 Nobel Laureate in Physics, David J. Energie du Vide. La force qui vient du vide.