What So Many People Don’t Get About the U.S. Working Class. My father-in-law grew up eating blood soup. 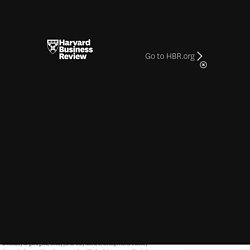 He hated it, whether because of the taste or the humiliation, I never knew. His alcoholic father regularly drank up the family wage, and the family was often short on food money. They were evicted from apartment after apartment. He dropped out of school in eighth grade to help support the family. Eventually he got a good, steady job he truly hated, as an inspector in a factory that made those machines that measure humidity levels in museums. Throughout the 1950s and 1960s, he read The Wall Street Journal and voted Republican. For months, the only thing that’s surprised me about Donald Trump is my friends’ astonishment at his success. One little-known element of that gap is that the white working class (WWC) resents professionals but admires the rich. Michèle Lamont, in The Dignity of Working Men, also found resentment of professionals — but not of the rich. Trump’s blunt talk taps into another blue-collar value: straight talk. J.D. How to Make Sense of 2016. FOR a certain kind of liberal, 2016 stands as a rebuke. 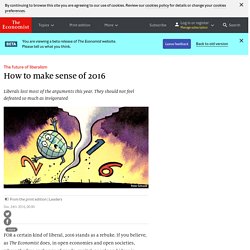 If you believe, as The Economist does, in open economies and open societies, where the free exchange of goods, capital, people and ideas is encouraged and where universal freedoms are protected from state abuse by the rule of law, then this has been a year of setbacks. Not just over Brexit and the election of Donald Trump, but also the tragedy of Syria, abandoned to its suffering, and widespread support—in Hungary, Poland and beyond—for “illiberal democracy”. As globalisation has become a slur, nationalism, and even authoritarianism, have flourished. In Turkey relief at the failure of a coup was overtaken by savage (and popular) reprisals. In the Philippines voters chose a president who not only deployed death squads but bragged about pulling the trigger.

Faced with this litany, many liberals (of the free-market sort) have lost their nerve. Mill wheels In the past quarter-century liberalism has had it too easy. Esquire/NBC >> American Rage Survey. LET'S BEGIN WITH THE BIG REVEALS: Half of all Americans are angrier today than they were a year ago. 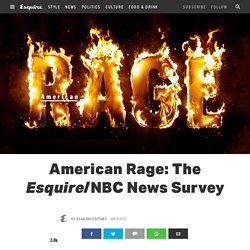 White Americans are the angriest of all. And black Americans are more optimistic about the future of the country and the existence of the American dream. There are depths and dimensions, dark corners and subtle contours to our national mood, and setting aside the issue of who actually has a right to be angry and about what—these pages are neutral territory; everyone is allowed their beef—we found three main factors shaping American rage: Advertisement - Continue Reading Below EXPECTATIONS: Are you disappointed? Indeed, despite having what many would consider a more legitimate case for feeling angry, black Americans are generally less angry than whites. EMPATHY: When we take a close look at our respondents by gender, women report a greater rise in anger than men over the past year. MJ>>American Anger Report: It's All About Republican Hatred of Obama. Jared Bernstein takes on one of my favorite hobbyhorses today: the supposed anger of the American electorate. 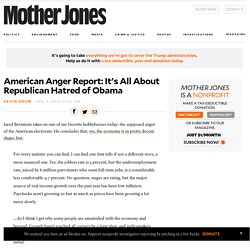 He concludes that, yes, the economy is in pretty decent shape, but: For every statistic you can find, I can find one that tells if not a different story, a more nuanced one. Yes, the jobless rate is 5 percent, but the underemployment rate, juiced by 6 million part-timers who want full-time jobs, is a considerably less comfortable 9.7 percent. No question, wages are rising, but the major source of real income growth over the past year has been low inflation. Paychecks aren’t growing so fast as much as prices have been growing a lot more slowly. ....So I think I get why some people are unsatisfied with the economy and beyond.

I think this misses the point. But why bother when you can just ask people directly how they're doing? Any more or less happy about the economy than they usually are. So why are voters so angry? Except for one thing: Americans are pissed at the government. WP>>Wages & Incomes Rising.. Why Are Folks So Angry About the Economy? (Manuel Balce Ceneta/AP) The electorate, we are told, is angry. 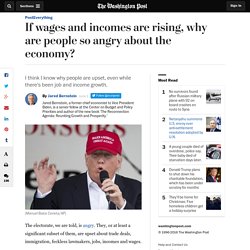 They, or at least a significant subset of them, are upset about trade deals, immigration, feckless lawmakers, jobs, incomes and wages. And yet, recent data show the following: * Real median income is on the rise, and the steepest growth in real middle-class incomes has been occurring in recent years. What’s wrong with that?! The data, estimated by the group Sentier Research and shown in the figure below, isn’t the government’s official measure, and it leaves out various income sources, like the value of medical benefits, but it’s a decent benchmark of market-based income for middle-class households. Source: Sentier Research * The percent of adults who say they’re “doing okay” or “living comfortably” has been improving overall in the past few years, as you might expect in an improving economy. Source: Federal Reserve.