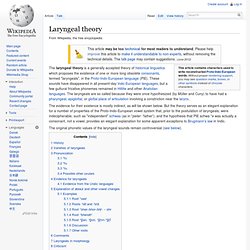 These sounds have disappeared in all present-day Indo-European languages, but a few guttural fricative phonemes remained in Hittite and other Anatolian languages. The laryngeals are so called because they were once hypothesized (by Müller and Cuny) to have had a pharyngeal, epiglottal, or glottal place of articulation involving a constriction near the larynx. The evidence for their existence is mostly indirect, as will be shown below. The original phonetic values of the laryngeal sounds remain controversial (see below).

History[edit] The beginnings of the theory were proposed by Ferdinand de Saussure in 1879, in an article chiefly devoted to something else altogether (demonstrating that *a and *o were separate phonemes in PIE). Glottalic theory. The Glottalic Theory holds that Proto-Indo-European had ejective stops, *pʼ *tʼ *kʼ, instead of plain voiced ones, *b *d *ɡ, of traditional Proto-Indo-European phonological reconstructions. 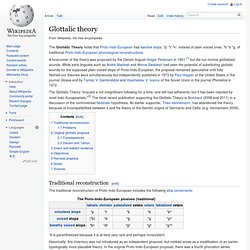 The Glottalic Theory "enjoyed a not insignificant following for a time, and still has adherents; but it has been rejected by most Indo-Europeanists. "[2] The most recent publication supporting the Glottalic Theory is Bomhard (2008 and 2011) in a discussion of the controversial Nostratic hypothesis. An earlier supporter, Theo Vennemann, has abandoned the theory because of incompatibilities between it and his theory of the Semitic origins of Germanic and Celtic (e.g. Vennemann 2006). Traditional reconstruction[edit] Schleicher's fable. Schleicher's fable (avis akvāsas ka) is an artificial text composed in the reconstructed language Proto-Indo-European (PIE) published by August Schleicher in 1868. 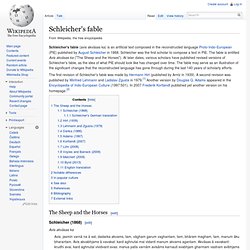 Schleicher was the first scholar to compose a text in PIE. The fable is entitled Avis akvāsas ka ("The Sheep and the Horses"). At later dates, various scholars have published revised versions of Schleicher's fable, as the idea of what PIE should look like has changed over time. The fable may serve as an illustration of the significant changes that the reconstructed language has gone through during the last 140 years of scholarly efforts. The first revision of Schleicher's fable was made by Hermann Hirt (published by Arntz in 1939). 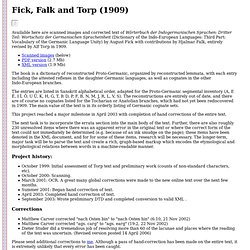 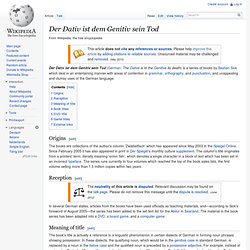 Origins[edit] Reception[edit] In several German states, articles from the books have been used officially as teaching materials, and—according to Sick's foreword of August 2005—the series has been added to the set text list for the Abitur in Saarland. The material in the book series has been adapted into a DVD, a board game, and a computer game. Meaning of title[edit] The book's title is actually a reference to a linguistic phenomenon in certain dialects of German in forming noun phrases showing possession. Book titles[edit] Der Dativ ist dem Genitiv sein Tod – Ein Wegweiser durch den Irrgarten der deutschen Sprache. DVD title[edit] Der Dativ ist dem Genitiv sein Tod – Die Große Bastian Sick Schau. A practical Sanskrit dictionary with transliteration, accentuation, and etymological analysis throughout.