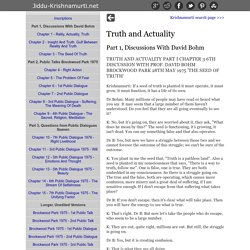 David Bohm Brockwood Park 28th May 1975 'The Seed of Truth' Krishnamurti: If a seed of truth is planted it must operate, it must grow, it must function, it has a life of its own. Dr Bohm: Many millions of people may have read or heard what you say. It may seem that a large number of them haven't understood. K: No, but it's going on, they are worried about it, they ask, "What does he mean by this? " Dr B: Yes, but now we have a struggle between those two and we cannot foresee the outcome of this struggle; we can't be sure of the outcome. K: You plant in me the seed that, "Truth is a pathless land". Dr B: If you don't escape, then it's clear what will take place. K: That's right. K: They are out, quite right, millions are out.

Dr B: Yes, but it is creating confusion. K: That is what they are all doing. Dr B: Yes, but we don't know the outcome of that. Krishnamurti - Truth, actuality, and the limits of thought. The friendly relationship between David Bohm and J. 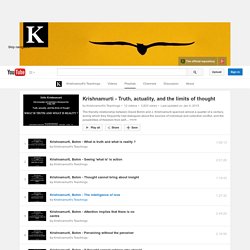 Krishnamurti spanned almost a quarter of a century, during which they frequently had dialogues about the sources of individual and collective conflict, and the possibilities of freedom from self-centred and confusing activity through a certain quality of insight. Their discussions sometimes included other teachers and scientists, psychiatrists and scholars.For some years David Bohm was a Trustee of the Krishnamurti Foundation and of Brockwood Park, the international school in Hampshire founded by Krishnamurti. 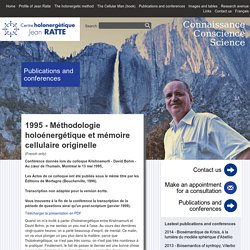 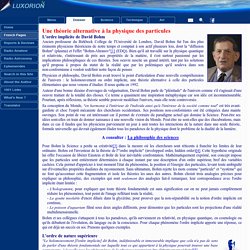 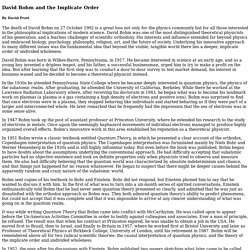 David Bohm was one of the most distinguished theoretical physicists of his generation, and a fearless challenger of scientific orthodoxy. His interests and influence extended far beyond physics and embraced biology, psychology, philosophy, religion, art, and the future of society. Underlying his innovative approach to many different issues was the fundamental idea that beyond the visible, tangible world there lies a deeper, implicate order of undivided wholeness. David Bohm was born in Wilkes-Barre, Pennsylvania, in 1917. In the 1930s he attended Pennsylvania State College where he became deeply interested in quantum physics, the physics of the subatomic realm. Interview with David Bohm - F. David Peat. Donations: Please support this site. 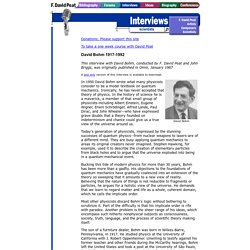 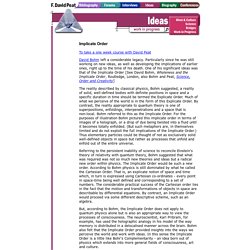 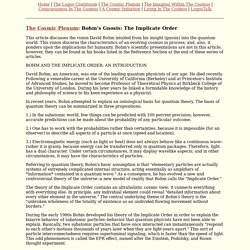 This vision discerns the characteristics of an evolving cosmos in process; and, also, it ponders upon the implications for humanity. Bohm's scientific presentations are not in this article; however, they can be found in his books listed in the Reference Section at the end of these series of articles. Official site for the upcoming documentary on David Bohm. TT: martin gardner on david bohm and krishnamurti. David Bohm and Jiddo Krishnamurti. 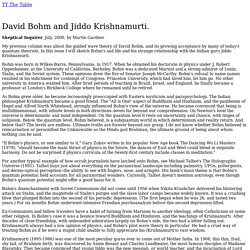 Skeptical Inquirer, July, 2000, by Martin Gardner My previous column was about the guided wave theory of David Bohm, and its growing acceptance by many of today's quantum theorists. In this issue I will sketch Bohm's sad life and his strange relationship with the Indian guru Jiddo Krishnamurti. Bohm was born in Wilkes-Barre, Pennsylvania, in 1917. When he obtained his doctorate in physics under J. As Bohm grew older, he became increasingly preoccupied with Eastern mysticism and parapsychology.

"If Bohm's physics, or one similar to it," Gary Zukav writes in his popular New Age book The Dancing Wu Li Masters (1979), "should become the main thrust of physics in the future, the dances of East and West could blend in exquisite harmony. For another typical example of how occult journalists have latched onto Bohm, see Michael Talbot's The Holographic Universe (1991). Krishnamurti (1895-1986) was one of the most peculiar gurus ever to come out of Mother India. Krishnamurti and David Bohm on thought, conflict, and dialogue. . . . to look at myself without any formula -- can one do that? 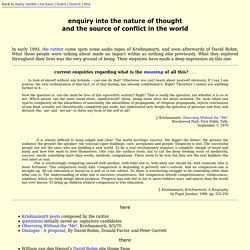