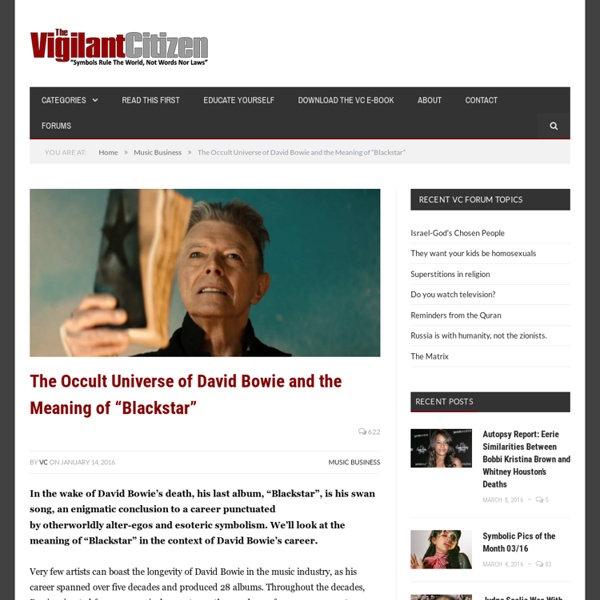 In the wake of David Bowie’s death, his last album, “Blackstar”, is his swan song, an enigmatic conclusion to a career punctuated by otherworldly alter-egos and esoteric symbolism. We’ll look at the meaning of “Blackstar” in the context of David Bowie’s career. Very few artists can boast the longevity of David Bowie in the music industry, as his career spanned over five decades and produced 28 albums. Throughout the decades, Bowie migrated from one musical genre to another, and even from one persona to another, but a constant remained: He was surrounded by an otherworldly aura. Through his work, Bowie turned himself into a musical ‘ascended master’, a Gnostic Christ-like figure who achieved a high level of illumination and who sought to communicate a cryptic message to humanity. Throughout his career, Bowie often turned himself into a mere vessel as he lent his body to various personas who spoke through him, often communicating messages of deep occult significance. Occult Bowie Major Tom Related:  Bowie

Tome On The Range | The Fall To Earth: David Bowie, Cocaine And The Occult For details of a free literary event including a reading from the book by Peter Doggett at Foyles on Charring Cross Road tonight, go to the end of the feature. The Unmaking of a Star #3: Cocaine and the Kabbalah I just wish Dave would get himself sorted fucking out. He’s totally confused, that lad... I just wish he could be in this room, right now, sat here, so I could kick some sense into him. Mick Ronson, 1975 Cocaine was the fuel of the music industry in the seventies. Bowie was, and has been, more candid about his drug use during this period than most of his contemporaries, and various associates have fleshed out the picture. ‘Give cocaine to a man already wise,’ wrote occultist Aleister Crowley in 1917, ‘[and] if he be really master of himself, it will do him no harm. It was not entirely helpful that a man who was bordering on cocaine psychosis should choose to immerse himself in the occult enquiries that had exerted a more intellectual fascination over him five years earlier.

The Villa Of Ormen David Bowies’ Gnostic Obsession With the Occult, Nazis and Cocaine Not many fans of the singer David Bowie (born as David Robert Jones in 1947) are aware that he had a secret obsession with the occult, Gnostic doctrines, the paranormal, Aleister Crowley, Nazi's and cocaine. He was by no means a Nazi himself, and in fact, his mother was Irish and part Jewish. There have been several books that have documented these alleged facts. It was also documented that in his younger years he was into the teachings of the Gnostics and Jewish Kabbalah. I found it fascinating that Bowie was interested in the occult and Gnosticism. There is an old story told of the seventeen–year–old Cameron Crowe who allegedly found Bowie secretly burning black candles against an aborted magical ritual during the LA period. In Bowie's 1971 song 'Quicksand' he sang: I'm closer to the Golden Dawn Immersed in Crowley's uniform of imagery. Bowie's extraterrestrials and silver pentagrams marked on their foreheads: Bowie had fascination with the NAZI's and Hitler.

The final mysteries of David Bowie’s Blackstar – Elvis, Crowley and 'the villa of Ormen' Nearly a fortnight after we were told “Look up here, I’m in heaven”, we’re still obsessing over David Bowie’s death. Pop detectives have been finding more cryptic clues about his demise from his last album, Blackstar, as well as discovering a tumblr that the man himself may have written. Here’s our handy, Illuminati-grade guide to the biggest work of death-art ever to hit the internet, to stop you swirling down a rabbit-hole of Bowie-sized proportions. 1 That album title Yes, it’s a name for a cancer lesion, although one usually associated with breast cancer, so its meaning in outer-space terminology is likely to have been far more significant for the Starman. Maybe Bowie was also winking at his good friend, Mos Def, who had a collective with the same name, plus Black Star is the name of a little-known Elvis song that has being doing the rounds. 2 Blackstar’s release date, and cover art 3 The lyrics and videos for Blackstar and Lazarus The song Blackstar begins in “the villa of Ormen”.