Motörhead "Heroes" (David Bowie Cover) Producer Tony Visconti Breaks Down the Making of David Bowie's Classic "Heroes," Track by Track. Those familiar with David Bowie lore may know one or two things about the recording of his seminal 1978 track “Heroes.” 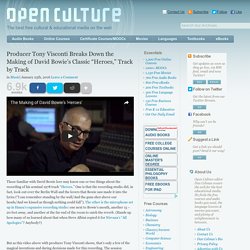 One is that the recording studio did, in fact, look out over the Berlin Wall and the lovers that Bowie saw made it into the lyrics (“I can remember standing by the wall/And the guns shot above our heads/And we kissed as though nothing could fall”). The other is the microphone set up in Hansa’s expansive recording studio: one next to Bowie’s mouth, another 15 – 20 feet away, and another at the far end of the room to catch the reverb. (Hands up how many of us learned about that when Steve Albini copied it for Nirvana’s “All Apologies”? Anybody?) But as this video above with producer Tony Visconti shows, that’s only a few of the magical inventions and daring decisions made for this recording.

This small segment above is part of a longer three-hour tour through Visconti’s career, recorded in 2011 for the Red Bull Academy lecture series. Related Content: David Bowie - Heroes. David Bowie, Live Acoustic "Heroes" Five for Friday: The Art of David Bowie. Five for Friday, written by a variety of MoMA staff members, is our attempt to spotlight some of the compelling, charming, and downright curious works in the Museum’s rich collection. 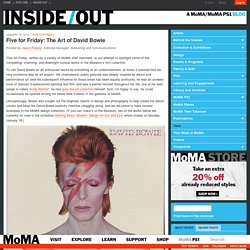 To call David Bowie an art enthusiast would be something of an understatement; at times it seemed that his very existence was an art project. His chameleonic public persona was deeply inspired by dance and performance art (and his subsequent influence on those areas has been equally profound); he was an avowed lover of German Expressionist painting and film, and was a painter himself throughout his life; one of his best songs is called “Andy Warhol“; he had quite the art collection himself. And, I’m happy to say, he could occasionally be spotted among his fellow New Yorkers in the galleries at MoMA. 1. Brian Duffy. 3. 1972 Ziggy Stardust promotions. 4.

The Changing Faces of David Bowie. Taken from issue 14 of Dazed, 1995: The chorus of "No Control”, one of the outstanding tracks on the new album Outside, co-produced by Brian Eno, echoes around the sparse, hangar-sized photographic studio. 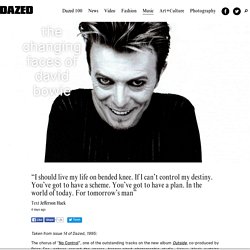 Heavy, black curtains prevent the scorching Californian sun from entering this artificially-cooled, darkened environment. In the corner against a stark white background, Bowie pulls apart his eyelids with his thumb and forefinger. His trademark stare, one dilated ‘cynical’ pupil, one expanded 'childlike' eye, takes on an exaggerated, forced life of its own.

One half of him has been there, seen it, done it; the other half is still excited and enthusiastic about seeing new things. Bowie's 48, his son Joe (christened Zowie) is 23. Outside is a dark, dramatic, urban, timewarp tale. It's 1999: A day in the life of art crime detective Nathan Adler. Flip to 1977: Bowie was a semi-recluse in Berlin. Flip to 1994: Bowie is experiencing the same level of artistic activity. DB: I'm not sure. Then I recorded Space Oddity... David bowie - heroes. David Bowie - Heroes. David Bowie Performs a Live Acoustic Version of “Heroes,” with a Bottle Cap Strapped to His Shoe, Keeping the Beat. Months ago, I stumbled upon this pretty wonderful video of David Bowie playing an “acoustic” version of “Heroes,” one of my favorite songs, and I thought I’d quickly share it today. 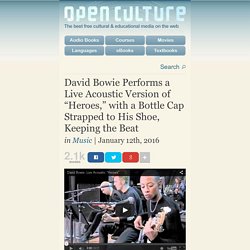 Why wait? Appearing at Neil Young’s annual Bridge School Benefit concert in October 1996, Bowie gives us a stripped-down version of the moving song he co-wrote with Brian Eno in 1977. Flanked by Reeves Gabrels on guitar and Gail Ann Dorsey on bass, Bowie strums his acoustic guitar. All the while, he taps his foot, letting a bottle cap, taped to shoe, assist in creating a percussive beat. It’s all kept elegantly simple. 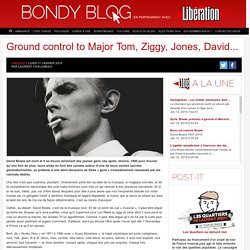