‘Spillover,’ by David Quammen, on How Animals Infect Humans. Linguists have a good eye for where language has been, but it’s rarely easy to see into its future. 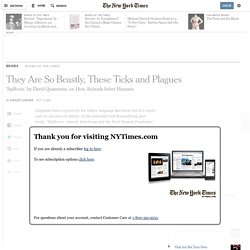 In his powerful and discomfiting new book, “Spillover: Animal Infections and the Next Human Pandemic,” the science writer David Quammen cites a dismal word we’ll be getting used to in the coming decades, whether we like it or not: zoonosis. A zoonosis is an animal infection that, through a simple twist of fate, becomes transmissible to humans. Maybe that twist is a needle prick, or contact with an exotic animal or hiking downwind of the wrong farm. “It’s a mildly technical term,” he admits, but probably not for long. “It’s a word of the future, destined for heavy use in the 21st century.”

Ebola and bubonic plague are zoonoses. Photo AIDS, he adds, that destroyer of 30 million people, is of zoonotic origin. In “Spillover” Mr. Among these diseases, the devils we know are bad enough. Mr. “Spillover” is a work of synthesis, not original science, and Mr. Mr. It is worth persevering. 587 pages. ‘Spillover,’ by David Quammen, on How Animals Infect Humans. ‘Spillover’ author David Quammen kicks off the 10th annual Mayborn with inspiration, advice. Three-time National Magazine Award winner (that’s the magazine-world equivalent of the Pulitzer Prize) David Quammen winningly engaged an audience of aspiring and published authors at the kickoff of the Mayborn Literary Nonfiction Conference in Grapevine. 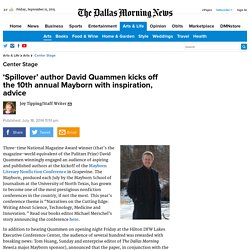 The Mayborn, produced each July by the Mayborn School of Journalism at the University of North Texas, has grown to become one of the most prestigious nonfiction conferences in the country, if not the most. This year’s conference theme is “Narratives on the Cutting Edge: Writing About Science, Technology, Medicine and Innovation.” Read our books editor Michael Merschel’s story announcing the conference here. Conference writer-in-residence George Getschow, head of the Mayborn “tribe” as attendees call it, introduced Quammen as the “dean of American science writers” and a man who was “born to be wild.” At this point in the talk, Quammen admitted he was “about to rant.”

Book review: ‘Spillover: Animal Infections and the Next Human Pandemic’ by David Quammen. We kept a bottle of mosquito repellent right next to the back door this summer and made sure the balky screen door was pulled tight each time we came in from the garden. 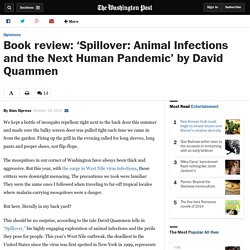 Let's not beat around the bush. 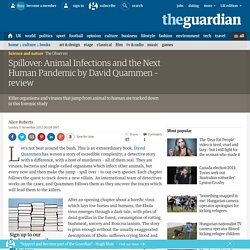 This is an extraordinary book. David Quammen has woven a story of incredible complexity; a detective story with a difference, with a host of murderers – all of them real. They are viruses, bacteria and single-celled organisms which infect other animals, but every now and then make the jump – spill over – to our own species. Each chapter follows the quest to track down a new villain. An international team of detectives works on the cases, and Quammen follows them as they uncover the traces which will lead them to the killers.

After an opening chapter about a horrific virus which lays low horses and humans, the Ebola virus emerges through a dark tale, with piles of dead gorillas in the forest, consumption of rotting bushmeat, sorcery and Rosicrucianism. In each chapter a disease gradually comes into focus, starting with rumours, a few seemingly unconnected, mysterious deaths.