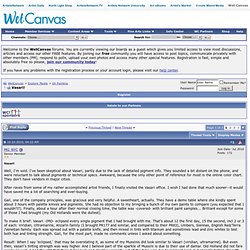 I've been skeptical about Vasari, partly due to the lack of detailed pigment info. They sounded a bit distant on the phone, and were reluctant to talk about pigments or technical specs. Awkward, because the only other point of reference for most is the online color chart. They don't have vendors in major cities.

After raves from some of my rather accomplished artist friends, I finally visited the Vasari office. Gail, one of the company principles, was gracious and very helpful. To make it brief: Vasari -IMO- eclipsed every single pigment that I had brought with me. Result: When I say 'eclipsed,' that may be overstating it, as some of my Mussinis did look similar to Vasari (viridian, ultramarine). Here was a major shock: The OH viridian was spread out beside Mussini and Vasari, and really receding by comparison to both.

Re other brands: Blockx put in a respectable showing except for a couple colors which looked dull by comparison. Weekend with the Masters - David Jon Kassan demo. David Jon Kassan is an artist I was really excited to meet and study with at the painting conference I recently attended, American Artist's Weekend With the Masters, in Monterey, California. 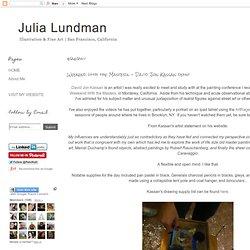 Aside from his technique and acute observational abilities, Kassan has been an artist I've admired for his subject matter and unusual juxtaposition of realist figures against street art or other interesting abstract textures. I've also enjoyed the videos he has put together, particularly a portrait on an ipad tablet using the ArtRage app as well as traditional portrait sessions of people around where he lives in Brooklyn, NY. If you haven't watched them yet, be sure to check out his blog and enjoy. From Kassan's artist statement on his website: My influences are understandably just as contradictory as they have fed and connected my perspective on painting. 2.5 hour Alla Prima painting - David Jon Kassan. David Kassan Workshop. I was lucky enough to go to a three day David Kassan Drawing Workshop in early December 2011 at the Townsend Atelier in Chattanooga TN. 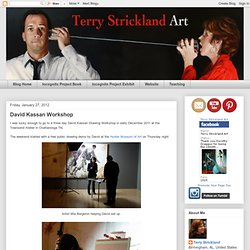 The weekend started with a free public drawing demo by David at the Hunter Museum of Art on Thursday night. David uses binoculars for seeing detail and true shapes. I've seen demos of his using them before on line and I always thought they would be used at the end for details but they are actually used early on, to see areas of dark and light more accurately. Here he is using a mahl stick with a hook on the end that can rest on the top of the drawing when he isn't using it. David's finished drawing from the demo which was about three hours long. Early Friday morning at the Atelier, David spent a bit of time setting up the model, experimenting with a dark or light background and adjusting the light. From my spot, you can see the light set up and my first clunky block in with the pan pastels. Drawing the Eyes with David Kassan. David Kassan's video has arrived! For those who aren't familiar, here's the promo for the DVD: I bought it as soon as I learned it had been released, and I thought I'd share my thoughts. 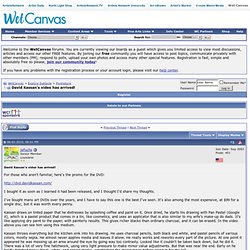 I've bought many art DVDs over the years, and I have to say this one is the best I've seen. It's also among the most expensive, at $99 for a single disc, but it was worth every penny. Kassan draws on tinted paper that he distresses by splashing coffee and paint on it. Once dried, he starts his drawing with Pan Pastel (Google it), which is a pastel product that comes in a tin, like cosmetics, and uses an applicator that is also similar to my wife's make-up do dads. David Kassan's video has arrived! Portrait Demonstration Using Oil. By David Jon Kassan My first intention for this demonstration was to do a quick study in oil, without a preliminary drawing, of the model’s eyes, but as I started working, I found the model’s face compelling. 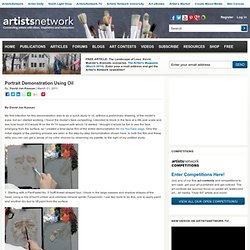 I decided to block in the face at a life-size scale and see how much of it would fit on the 8×10 support with which I’d started. I thought it would be fun to see the face emerging from the surface, so I created a time-lapse film of the entire demonstration for my YouTube page. Only the initial stages of the painting process are seen in the step-by-step demonstration shown here. In both the film and these stills, you can can get a sense of my color choices by observing my palette, to the right of my untitled study. 1. 2. 3. 4. 5. 6. 7. To read more about Kassan’s work, click here to get your digital copy of the April 2011 issue of The Artist’s Magazine and read the feature article “Urban Studies,” by Jill Bossert. • Watch art workshops on demand at ArtistsNetwork.TV. Week 10/07 Portrait workshop with David Kassan - Page 3.