Why offshore? A lesson from Cameron. As we saw today in the House of Commons, David Cameron is quite capable of defending himself over his ownership of shares in an investment fund before he became Prime Minister and so this blog is certainly not intending to act as cheerleader or critic of the points he made. 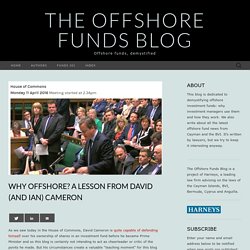 But his circumstances create a valuable “teaching moment” for this blog and for those that question why investment funds are traditionally set up offshore in the first place. Blairemore Holdings Inc, the entity in which he held shares from 1997 through to 2010, is an investment fund. Originally incorporated in Panama, it was operated out of the Bahamas and moved to Ireland in 2010. It invests in global equities and has a minimum subscription amount of US$100,000. Therefore, investing in this type of fund structure doesn’t even amount to lawful tax avoidance, let alone illegal tax evasion. Clearly, the case for offshore funds is nuanced, complex and not well suited to tabloid headlines or 140 character twitter feeds. Fund run by David Cameron’s father avoided paying UK tax.

David Cameron’s father ran an offshore fund that avoided ever having to pay tax in Britain by hiring a small army of Bahamas residents – including a part-time bishop – to sign its paperwork. 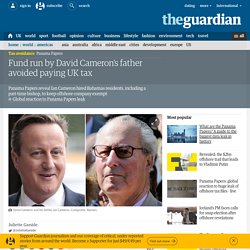 Ian Cameron was a director of Blairmore Holdings Inc, an investment fund run from the Bahamas but named after the family’s ancestral home in Aberdeenshire, which managed tens of millions of pounds on behalf of wealthy families. Clients included Isidore Kerman, an adviser to Robert Maxwell who once owned the West End restaurants Scott’s and J Sheekey, and Leopold Joseph, a private bank used by the Rolling Stones.

Panama Papers: David Cameron clarifies tax position and tells critics to 'put up or shut up' Downing Street has issued further clarification about the Prime Minister’s financial affairs, confirming that neither he, his wife or his children stand to benefit from offshore funds or trusts in the future. 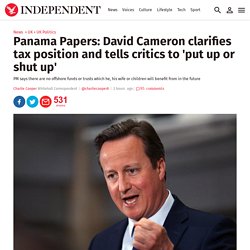 The denial is the latest of a series of statements issued by No10 in the wake of the Panama Papers revelation that David Cameron’s father ran an offshore investment fund which never paid UK tax. Yesterday, officials only went as far to say the Prime Minister and his immediate family did not currently benefit from any offshore funds, leading to speculation that he still stood to inherit or realise funds in the future. In a sign of growing frustration in Downing Street, after Labour leader Jeremy Corbyn suggested yesterday that Mr Cameron’s family’s own tax affairs should be part of an independent investigation into the Panama leaks, a spokesperson said it was time for those questioning the PM’s financial arrangements to “put up or shut up”. 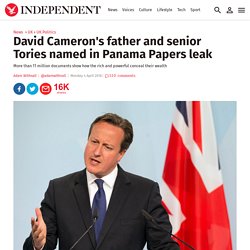 Though he is not named in the reports himself, the British Prime Minister is linked to the so-called “Panama Papers” by his late father Ian Cameron, who died in 2010. According to the International Consortium of Investigative Journalists, which coordinated the research into the 11 million secret files handed over by an anonymous source, Mr Cameron used Mossack Fonseca’s services to shield his investment fund, Blairmore Holdings Inc. A 2006 prospectus for Blairmore Holdings Inc described Mr Cameron, a stockbroker and multi-millionaire, as “instrumental in [its] formation”. It said the fund “should be managed and conducted so that it does not become resident in the United Kingdom for UK taxation purposes”. Loaded: 0% Progress: 0% What are The Panama Papers? 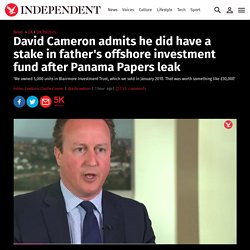 The admission comes five days after the leak of a huge cache of documents – dubbed the Panama Papers – detailing the tax affairs of thousands of individuals of worldwide. They revealed that the Prime Minister’s father, Ian Cameron, who passed away in 2010, ran a fund under the name Blairmore Holdings. Downing Street staffers initially said that it was a “private matter” whether or not Mr Cameron had benefitted from the fund.

They later issued a series of statements denying the Prime Minister currently benefitted from offshore funds, or stood to do so in the future. But in an interview with ITV News, he insisted that it was a "fundamental misconception" that Blairmore Holdings, set up by his father in the 1980s and run from the Bahamas, was set up to avoid tax. Loaded: 0% Progress: 0% World leaders linked to 'Panama Papers'