Therefore, a conflict of interest can be discovered and voluntarily defused before any corruption occurs. A widely used definition is: "A conflict of interest is a set of circumstances that creates a risk that professional judgement or actions regarding a primary interest will be unduly influenced by a secondary interest. Anticorruption from Antiquity to the Modern Era - SPUI25. In cooperation with the Faculty of Humanities 15jan2018 17:00 - 18:30 Anticorruption is a timely and urgent matter: corruption is widely seen today as a major problem we face as a global society. 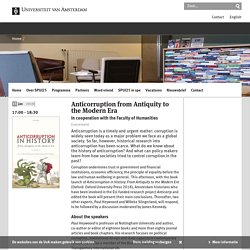 So far, however, historical research into anticorruption has been scarce. What do we know about the history of anticorruption? Anti-corruption in History: From Antiquity to the Modern Era. Abstract Anticorruption in History is the first major collection of case studies on how past societies and polities, in and beyond Europe, defined legitimate power in terms of fighting corruption and designed specific mechanisms to pursue that agenda. 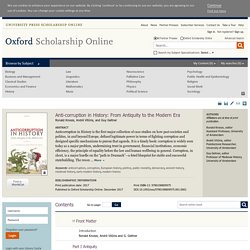 It is a timely book: corruption is widely seen today as a major problem, undermining trust in government, financial institutions, economic efficiency, the principle of equality before the law and human wellbeing in general. Corruption, in short, is a major hurdle on the “path to Denmark”—a feted blueprint for stable and successful statebuilding. The reson ... Corruptie is veel complexer dan we denken.

The Slow Death of the University. A few years ago, I was being shown around a large, very technologically advanced university in Asia by its proud president. 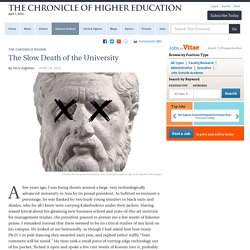 As befitted so eminent a personage, he was flanked by two burly young minders in black suits and shades, who for all I knew were carrying Kalashnikovs under their jackets. Having waxed lyrical about his gleaming new business school and state-of-the-art institute for management studies, the president paused to permit me a few words of fulsome praise. I remarked instead that there seemed to be no critical studies of any kind on his campus. He looked at me bemusedly, as though I had asked him how many Ph.D.’s in pole dancing they awarded each year, and replied rather stiffly "Your comment will be noted.

" He then took a small piece of cutting-edge technology out of his pocket, flicked it open and spoke a few curt words of Korean into it, probably "Kill him. " The corporate university and its threat to academic freedom. Neoliberalism has facilitated the emergence of the 'corporate' university, which dangerously prioritises market rationality and public relations over academic freedom. 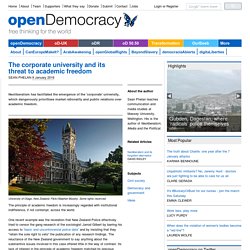 The principle of academic freedom is increasingly regarded with institutional indifference, if not contempt, across the world. One recent example was the revelation that New Zealand Police effectively tried to censor the gang research of the sociologist Jarrod Gilbert by barring his access to “basic and uncontroversial police data” and by insisting that they "retain the sole right to veto” the publication of any research findings. The reluctance of the New Zealand government to say anything about the substantive issues involved in this case offered little in the way of contrast.

Its lack of interest in the principle of academic freedom matched its previous nonchalance about press freedom. Stefan Collini · Who are the spongers now? · LRB 21 January 2016. In After Virtue: A Study in Moral Theory (1981), Alasdair MacIntyre raised the disquieting possibility that what we take to be ‘the’ language of morality now amounts to little more than a collection of verbal remains – husks from which the kernels of coherent moral beliefs have long since been removed. 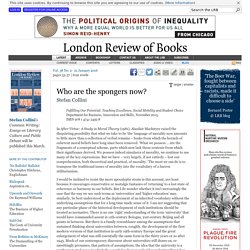 ‘What we possess … are the fragments of a conceptual scheme, parts which now lack those contexts from which their significance derived. We possess indeed simulacra of morality, we continue to use many of the key expressions. What Makes a University Public?: Privatization, Environmental Racism, and UC Berkeley’s Real Estate Office. By Beezer de Martelly “It’s a gift to be here—you can take that to the bank.” 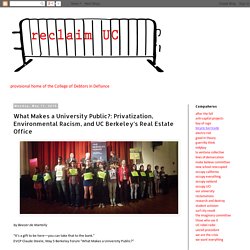 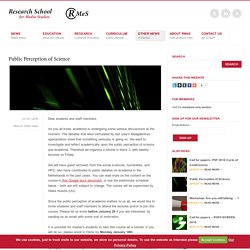 The debates that were stimulated by last year’s Maagdenhuis appropriation show that something seriously is going on. We want to investigate and reflect academically upon the public perception of science and academia. OpEd: Public or Private? – Real Estate’s Hostile Takeover of RSSP and Dining. My First Tour at UC Berkeley At this moment three years ago, I was making what seemed like the most important decision of my young life: where did I want to spend the next four years? 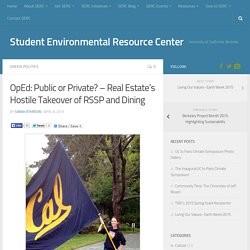 For me, the question was not just about academics, nor just about the communities that I would be a part of, nor the opportunities that would be presented. All of these aspects were fairly comparable across all of the colleges I applied to. Het HAVO 5-examen Economie presenteert dogma's als de waarheid. TU Delft forgot its role in this modern era - Ali Haseltalab - TU Delta. 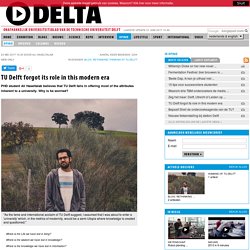 Why is he worried? "As the fame and international acclaim of TU Delft suggest, I assumed that I was about to enter a 'university' which, in the metrics of modernity, would be a semi-Utopia where knowledge is created and questioned. " Where is the Life we have lost in living? Where is the wisdom we have lost in knowledge?

* 'Universities resemble capitalist enterprises' - Ali Haseltalab. 01 juni 2017 14.01 door Ali HaseltalabAantal keer bekeken: 61WEB ONLY In dossier: BLOG: Rethinking thinking at TU Delft Phd-student Ali Haseltalab is concerned about 'the negative effects of the commercialisation of universities'. He will explain what he means in this blog. "The number of scientific papers, patents, students and graduates became the key factor in the distribution of budgets among universities. " In the previous article, I discussed my reasons for believing that TU Delft fails in offering most of the attributes inherent to a university. 'TU Delft should drop the commercialization culture' - TU Delta - Universiteitsblad TU Delft.

15 juni 2017 12.12 door Ali HaseltalabAantal keer bekeken: 4313WEB ONLY In dossier: BLOG: Rethinking thinking at TU Delft True academic freedom should be reinstated at TU Delft, Phd-student Ali Haseltalab argues in this blog. Ali Haseltalab: "Educational programmes are condensed to create space for higher numbers of students. This leaves no time and space for self-construction. " My previous article explains how the commercialisation of educational environments leads not only to the decline of universities, but also affects individuals in terms of working conditions.

Indeed, that is how the corporatisation and commercialisation of universities restrains academic freedom. 'TU Delft should educate minds rather than just hands' 04 juli 2017 12.35 door Ali Haseltalab Aantal keer bekeken: 72 WEB ONLY TU Delft academics should serve as true teachers and researchers rather than managers or budget catchers, writes Phd-student Ali Haseltalab in this blog.

And he has more solutions to the crisis he says TU Delft is in. Ali Haseltalab: "The university should invest in enhancing the intellectual level of graduate and PhD students. " In my previous article, I explained how the commercialisation of universities endangers academic freedom and influences the intellectual level of academics and students. The truth is that, in this modern era, universities, as public institutes, are in dire straits.

Ali Haseltalab (@alihaseltalab) Staff - A. Haseltalab. The Civic University. Contents: Part I: Why the Civic University? 1. Introduction: Why the Civic University? John Goddard, Ellen Hazelkorn, Louise Kempton and Paul Vallance. Eelco Runia: 'Marktdenken betekent de ondergang van de universiteit' Aflevering 3: De Neoliberale Universiteit – De Onvolmaakte Universiteit. Eelco Runia (@eelcorunia) The Corporations Devouring American Colleges. If there’s one thing you can count on in these uncertain times, it’s that the cost of college will rise—and then rise some more. Almost every year, whether the economy is in a state of boom or bust, tuition hits a record high. But why? Is it really twice as expensive to provide a degree as it was 20 years ago? Colleges go to absurd and extraordinary lengths to avoid answering this question, reporting their financials in a way that deliberately obscures how much money different units spend and make.

They don’t even like to use the word “profits,” preferring euphemisms like “surplus.” Alfa’s in opstand: ‘Het is tijd om met de vuist op tafel te slaan’