NSAC Climate Change Policy Position paper 112019 WEB. Can Meat Actually Save The Planet? Meat has had a rough few years. Since a shocking 2006 report found that livestock are a major contributor to climate change, there has been a nationwide ― if not global ― movement to eat less meat. But many experts say that the war on meat is missing the point. There is an extensive body of research suggesting that livestock should not shoulder blame for the climate crisis. In fact, these experts would argue that grazing animals are a crucial part of the solution. “The current methods of meat production are absolutely unacceptable from an environmental and animal welfare standpoint, but that doesn’t logically lead us to the conclusion that we should get rid of meat,” said Nicolette Hahn Niman, an environmental-lawyer-turned-cattle-rancher and author of “Defending Beef.” Niman’s book explains in great scientific detail how, through proper management systems, livestock have the potential to positively impact ― even reverse ― the effects of climate change. 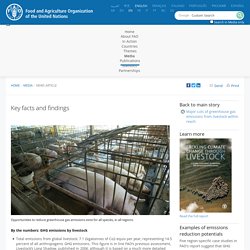 By the numbers: GHG emissions by livestockTotal emissions from global livestock: 7.1 Gigatonnes of Co2-equiv per year, representing 14.5 percent of all anthropogenic GHG emissions. This figure is in line FAO’s previous assessment, Livestock’s Long Shadow, published in 2006, although it is based on a much more detailed analysis and improved data sets. The two figures cannot be accurately compared, as reference periods and sources differ.Cattle (raised for both beef and milk, as well as for inedible outputs like manure and draft power) are the animal species responsible for the most emissions, representing about 65% of the livestock sector’s emissions.In terms of activities, feed production and processing (this includes land use change) and enteric fermentation from ruminants are the two main sources of emissions, representing 45 and 39 percent of total emissions, respectively. 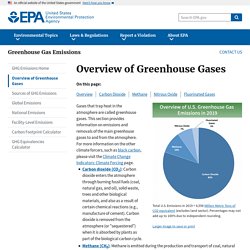 Larger image to save or print.Gases that trap heat in the atmosphere are called greenhouse gases. This section provides information on emissions and removals of the main greenhouse gases to and from the atmosphere. For more information on the other climate forcers, such as black carbon, please visit the Climate Change Indicators: Climate Forcing page. 6,587 million metric tons of CO2: What does that mean? An explanation of units: A million metric tons is equal to about 2.2 billion pounds, or 1 trillion grams. The U.S. GHG emissions are often measured in carbon dioxide (CO2) equivalent.

The GWP values appearing in the Emissions webpages reflect the values used in the U.S. . : Carbon dioxide enters the atmosphere through burning fossil fuels (coal, natural gas, and oil), solid waste, trees and wood products, and also as a result of certain chemical reactions (e.g., manufacture of cement). Sources of Agricultural Greenhouse Gases - eXtension. Where Greenhouse Gases Come From - Energy Explained, Your Guide To Understanding Energy. Did you know? 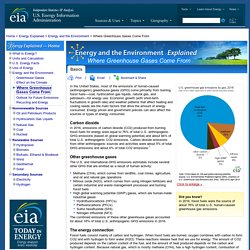 In 2016, fossil fuels were the source of about 76% of total U.S. human-caused greenhouse gas emissions. In the United States, most of the emissions of human-caused (anthropogenic) greenhouse gases (GHG) come primarily from burning fossil fuels—coal, hydrocarbon gas liquids, natural gas, and petroleum—for energy use. Fertilizer use responsible for increase in nitrous oxide in atmosphere. University of California, Berkeley, chemists have found a smoking gun proving that increased fertilizer use over the past 50 years is responsible for a dramatic rise in atmospheric nitrous oxide, which is a major greenhouse gas contributing to global climate change. 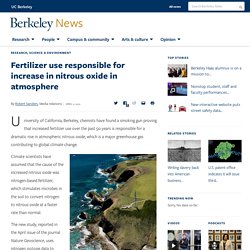 The Cape Grim Baseline Air Pollution Station in Tasmania, where air samples have been collected since 1978. These samples show a long-term trend in isotopic composition that confirms that nitrogen-based fertilizer is largely responsible for the 20 percent increase in atmospheric nitrous oxide since the Industrial Revolution. Photo courtesy of CSIRO. Climate scientists have assumed that the cause of the increased nitrous oxide was nitrogen-based fertilizer, which stimulates microbes in the soil to convert nitrogen to nitrous oxide at a faster rate than normal.

“We are not vilifying fertilizer. Since the year 1750, nitrous oxide levels have risen 20 percent – from below 270 parts per billion (ppb) to more than 320 ppb. Fertilizer produces far more greenhouse gas than expected. With an overload of fertilizer, soil microbes on farms may belch unexpectedly high levels of nitrous oxide, a greenhouse gas with 300 times as much heat-trapping power as carbon dioxide. 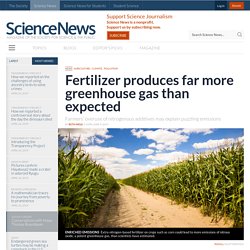 The finding may help explain why agricultural nitrous oxide emissions are much higher than some scientists had predicted and could give clues for how to curb farm pollution. Soil microbes have long been known to convert nitrogen-rich crop fertilizers, including manure and synthetic fertilizers, into nitrous oxide. Beef cattle grazing on American rangelands—not feedlots—could be net carbon sink. Beef cattle on pasture in the USA (photo credit: BEEF magazine). 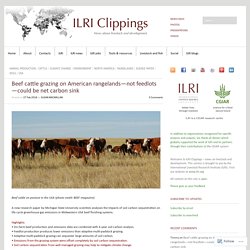