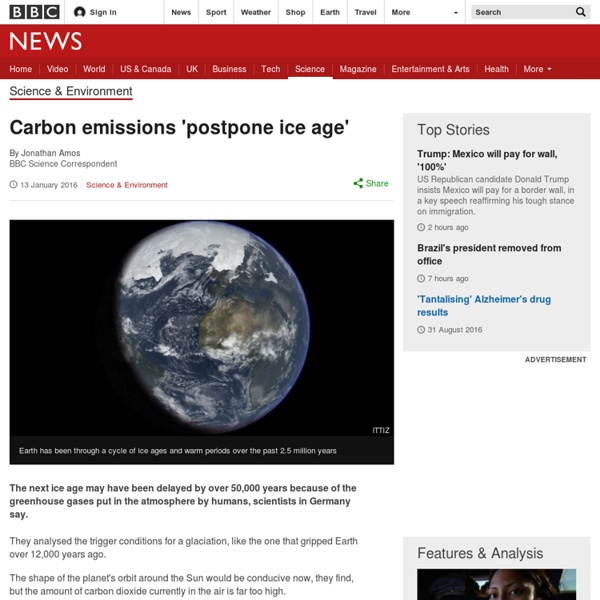 Image copyright Ittiz The next ice age may have been delayed by over 50,000 years because of the greenhouse gases put in the atmosphere by humans, scientists in Germany say. They analysed the trigger conditions for a glaciation, like the one that gripped Earth over 12,000 years ago. The shape of the planet's orbit around the Sun would be conducive now, they find, but the amount of carbon dioxide currently in the air is far too high. Earth is set for a prolonged warm phase, they tell the journal Nature. "In theory, the next ice age could be even further into the future, but there is no real practical importance in discussing whether it starts in 50,000 or 100,000 years from now," Andrey Ganopolski from the Potsdam Institute for Climate Impact Research said. "The important thing is that it is an illustration that we have a geological power now. Earth has been through a cycle of ice ages and warm periods over the past 2.5 million years, referred to as the Quaternary Period. Planet rock

How to set up your own Raspberry Pi powered VPN Eyes are everywhere online. The websites you visit often track where you came from and watch where you head off to next. A VPN - or virtual private network - helps you browse the internet more anonymously by routing your traffic through a server that is not your point of origin. It is a bit like switching cars to shake off someone who is tailing you. There are plenty of companies offering services with varying degrees of security and varying degrees of cost, but if you are willing to roll your sleeves up and get technical with some basic coding and a £30 Raspberry Pi computer, you can build your own VPN server at home. It won't give you the option of appearing to be from somewhere else but you can use it to connect external devices like a smartphone to browse the internet more securely through your home network, and access shared files and media on your home computer.

The clearest proof we’ll ever get that our planet is falling apart Every once in a while, a chart or statistic or image comes along that reminds us, all over again, why it is that this global warming thing is so terrifying. This week, it was those darn walruses, who — after a summer when Arctic sea ice was at its sixth-lowest level on record — mobbed an Alaska beach in the largest such haul-out ever observed there. Salon was on the story. How can we store more energy from the sun and the wind? Image copyright Solar Reserve It could be a scene from a science fiction movie. Deep in the Nevada desert, thousands of mirrors arrayed in concentric circles face the sky, lit up by the sun.

Goal 13 targets * Acknowledging that the United Nations Framework Convention on Climate Change is the primary international, intergovernmental forum for negotiating the global response to climate change. Facts and figures Thanks to the Intergovernmental Panel on Climate Change we know: How thermal imaging tech is about to become hot stuff Image copyright Detroit Zoo Soon we'll all be feeling the heat, thanks to thermal imaging technology. Although it's already been used by industry, the military and some emergency services, it was expensive and therefore had a limited market.

Climate Change Deeply complex, the climate system drives wind, water, and warmth around our beautiful blue planet, nurturing all life. But now our climate is changing fast. The cause is an old, broken energy system that pollutes our air and water, drives inequality and destroys priceless landscapes. We really have to change; we have only a limited time to act. Tim Peake returns to Earth Summary British astronaut Tim Peake has returned to Earth after a six-month stay aboard the International Space Station (ISS)During his mission, Major Peake completed the first spacewalk by a UK astronaut and ran the London MarathonHe completed 2,976 orbits of Earth and covered a distance of roughly 125 million kmA Soyuz capsule carrying Major Peake, American Tim Kopra and Russian Yuri Malenchenko undocked from the ISS at 06:53 BSTAfter plunging through the atmosphere the capsule touched down in Kazakhstan at 10:15 BSTAll three crew members are safe and are undergoing routine medical checks