History of the Earth 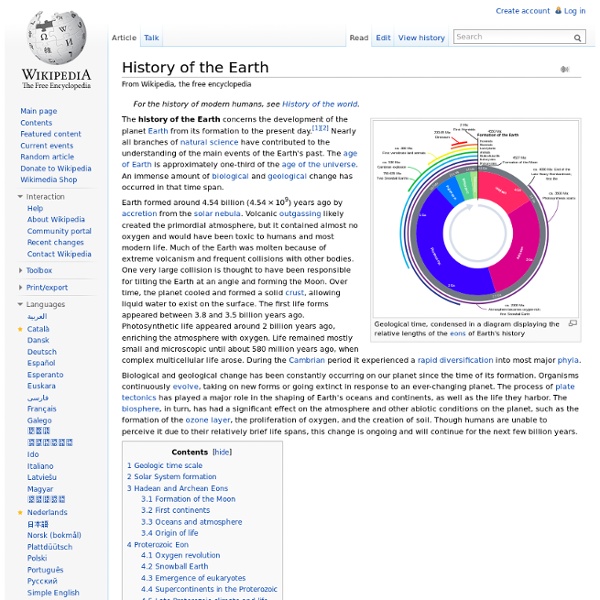 The history of the Earth concerns the development of the planet Earth from its formation to the present day.[1][2] Nearly all branches of natural science have contributed to the understanding of the main events of the Earth's past. The age of Earth is approximately one-third of the age of the universe. An immense amount of biological and geological change has occurred in that time span. The first life forms appeared between 3.8 and 3.5 billion years ago. The earliest evidences for life on Earth are graphite found to be biogenic in 3.7 billion-year-old metasedimentary rocks discovered in Western Greenland[3] and microbial mat fossils found in 3.48 billion-year-old sandstone discovered in Western Australia.[4][5] Photosynthetic life appeared around 2 billion years ago, enriching the atmosphere with oxygen. Life remained mostly small and microscopic until about 580 million years ago, when complex multicellular life arose. Geologic time scale[edit] Millions of Years First continents[edit]

AMNH, NY: Permanent Exhibitions The Biodiversity and Environmental Halls offer a vivid and inspiring vision of the spectacular beauty and abundance of life on Earth. The Museum’s Birds Halls portray the wide variety of avian life on the planet, and the Hall of Reptiles and Amphibians reviews the anatomy, behavior, and various adaptations of these vertebrates. The Earth and Planetary Sciences halls showcase remarkable specimens, including meteorites, minerals, and rare gems, that offer clues about the origins of our solar system and the dynamic processes of our planet. One of the premier attractions in New York City is the Museum's series of fossil halls, including its two famed dinosaur halls in the David H. Koch Dinosaur Wing, as well as the Lila Acheson Wallace Wing of Mammals and Their Extinct Relatives. The Hall of Human Origins explores the evolutionary story of the human family, while the Cultural Halls examine the cultures of Asia, Africa, North and South America, and the Pacific.

Geological history of Earth Geologic time represented in a diagram called a geological clock, showing the relative lengths of the eons of Earth's history and noting major events The geological history of Earth follows the major events in Earth's past based on the geologic time scale, a system of chronological measurement based on the study of the planet's rock layers (stratigraphy). Earth formed about 4.54 billion years ago by accretion from the solar nebula, a disk-shaped mass of dust and gas left over from the formation of the Sun, which also created the rest of the Solar System. As the surface continually reshaped itself over hundreds of millions of years, continents formed and broke apart.

KIC 12557548 History of detection[edit] The existence of the planet was first evidenced in data collected by the Kepler spacecraft. However, the light curve of the star, a graph of its stellar flux versus time, showed that while there were regular drops in stellar flux approximately every 15 hours, the amount of light being blocked covered a wide range, from 0.2% to 1.3% of the starlight being blocked.[2] Rappaport et al. (2012) proposed various possible phenomena which may have caused the anomalies in the light curve, including two planets orbiting each other,[6] and an eclipsing binary orbiting the star in a larger triple-star system.[2] However, the authors found the hypothetical binary planet system to be unstable[2] and the latter scenario to be poorly supported by the data collected by Kepler.[2] Planetary system[edit] References[edit] ^ Jump up to: a b c d e f "Basic data: 2MASS J19235189+5130170 -- Infra-Red source".

Geologic time scale The geologic time scale (GTS) is a system of chronological measurement that relates stratigraphy to time, and is used by geologists, paleontologists, and other earth scientists to describe the timing and relationships between events that have occurred throughout Earth's history. The table of geologic time spans presented here agrees with the nomenclature, dates and standard color codes set forth by the International Commission on Stratigraphy. Evidence from radiometric dating indicates that the Earth is about 4.54 billion years old. Plastic particle water pollution A large portion of marine debris consists of plastic particles, including nurdles, pre-production microplastic resin pellets typically under 5 mm (0.20 in) in diameter found outside of the typical plastic manufacturing stream and an intermediate good used to produce plastic final products;[1] microbeads from cosmetics; and the breakdown products of plastic litter. Plastic particle water pollution is also referred to as mermaids' tears.[2] Approximately 60 billion pounds (27 million tonnes) of nurdles are manufactured annually in the United States.[3] One pound of pelletized HDPE contains approximately 25,000 nurdles (approximately 20 mg per nurdle).

Future of the Earth Conjectured illustration of the scorched Earth after the Sun has entered the red giant phase, 7 billion years from now.[1] During the next four billion years, the luminosity of the Sun will steadily increase, resulting in a rise in the solar radiation reaching the Earth. This will cause a higher rate of weathering of silicate minerals, which will cause a decrease in the level of carbon dioxide in the atmosphere. In about 600 million years, the level of CO 2 will fall below the level needed to sustain C3 carbon fixation photosynthesis used by trees. Some plants use the C4 carbon fixation method, allowing them to persist at CO 2 concentrations as low as 10 parts per million. However, the long-term trend is for plant life to die off altogether.

NASA - Sun-Earth Day - Technology Through Time - #50 Ancient Sunlight The 8-minute travel time to Earth by sunlight hides a thousand-year journey that actually began in the core. Sunrises are seen with light created thousands of years ago in the core of the sun. Sunlight is produced through nuclear reactions in the sun's core. Originally born as energetic gamma rays, after billions of collisions with matter, this radiation reaches the surface and escapes into space. How old is sunlight by the time it reaches the surface? History of the Earth - EvoWiki From EvoWiki Painting of a late Jurassic Scene on one of the large island in the Lower Saxony basin in northern Germany. It shows an adult and a juvenile specimen of the sauropod Europasaurus holgeri and Iguanodons passing by. There are two Compsognathus in the foreground and an Archaeopteryx at the right. According to mainstream science, the universe is approximately 13.7 billion years old. It is thought that our universe's existence can be traced back to an event in space-time known as the Big Bang.

Holocene extinction The dodo, a flightless bird of Mauritius, became extinct during the mid-late seventeenth century after humans destroyed the forests where the birds made their homes and introduced mammals that ate their eggs. The Holocene extinction includes the disappearance of large mammals known as megafauna, starting between 9,000 and 13,000 years ago, the end of the last Ice Age. This may have been due to the extinction of the mammoth that had maintained grasslands that became birch forests without the mammoths.[3] The new forest and the resulting forest fires may have induced climate change.[3] Such disappearances might be the result of the proliferation of modern humans which led to climate change.

Carbon-14 Carbon-14, 14C, or radiocarbon, is a radioactive isotope of carbon with a nucleus containing 6 protons and 8 neutrons. Its presence in organic materials is the basis of the radiocarbon dating method pioneered by Willard Libby and colleagues (1949) to date archaeological, geological and hydrogeological samples. Carbon-14 was discovered on 27 February 1940, by Martin Kamen and Sam Ruben at the University of California Radiation Laboratory in Berkeley. Its existence had been suggested by Franz Kurie in 1934.[2]

Sediment Samples from Japanese Lake Extend Carbon Dating Timeline Tighter carbon dates for the remains of Neanderthals could help explain why they became extinct. Image: J. Reader/SPL. Climate records from a Japanese lake will improve the accuracy of dating techniques, which will probably help shed light on some mysteries such as the extinction of the Neanderthals as well as paradoxes that have arisen due to dating. The scientists published their findings in the journal Science.

Microbeads Microbeads are polyethylene microspheres that are widely used in cosmetics as exfoliating agents and personal care products such as toothpaste, as well as biomedical and health science research, microscopy techniques, fluid visualization and fluid flow analysis, and process troubleshooting.[1] In the United States, microbeads are defined as less than five millimeters in its largest dimension.[2] Microbeads are commercially available in particle sizes from 10 µm to 1000 µm (1mm). Low melting temperature and fast phase transitions make this material especially suitable for creating porous structures in ceramics and other materials. Ross 248 This star has about 12% of the Sun's mass and 16% of the Sun's radius, but only 0.2% of the Sun's luminosity. It has a stellar classification of M6 V,[3] which indicates it is a type of main sequence star known as a red dwarf. This is a flare star that occasionally increases in luminosity.[13] With high probability there appears to be a long-term cycle of variability with a period of 4.2 years. This variability causes the star to range in visual magnitude from 12.23 to 12.34.[14] In 1950, this became the first star to have a small variation in magnitude attributed to spots on its photosphere.[15]

Bad News: DNA Has Limited Half-Life Michael Harper for redOrbit.com — Your Universe Online Despite its status as a best selling novel and blockbuster hit, it turns out Jurassic Park was based on a fundamentally flawed premise–bad news for dinoDNA researchers. After drilling through some old bird bones, palaeogeneticists in Copenhagen and Australia have discovered DNA can hardly survive 1,000 years, let alone make it through the millions of years that separate us from our reptilian overlords. Led by Morten Allentoft at the University of Copenhagen and Michael Bunce at Murdoch University in Perth, Australia, a group of palaeogeneticists studied many bones from a Moa bird fossil to understand just how feasible it is to clone a Raptor these days. “We’ve been permanently plagued by this Jurassic Park myth that’s been kicking around since the early nineties,” Bunce told the Sydney Morning Herald, reports the Telegraph. “The myth is still out there.