It's over in a billion years 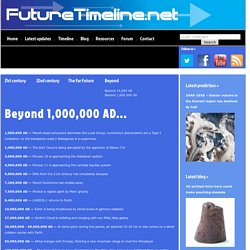 The very few which do remain comprise only a tiny fraction of the total sentient minds in existence. Though free to come and go as they please, they have practically zero influence in any governmental systems on Earth or elsewhere, being regarded as wholly subordinate to AIs and other entities. As a species, homo sapiens has continued to evolve over time. This has led to a further increase in cranial size, a near-total absence of hair, an elongation of limbs, a more robust and capable immune system, and increased lifespan. The vast majority of humans have long since abandoned these primitive biological forms, making the transition to machines or other substrates and achieving practical immortality.

A number of alien intelligences have been contacted by now. . © Randall Mikulas | Dreamstime.com Credit: NASA. Blue Marble: Animations. This spectacular “blue marble” image is the most detailed true-color image of the entire Earth to date. 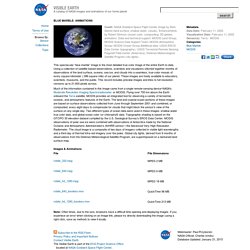 Using a collection of satellite-based observations, scientists and visualizers stitched together months of observations of the land surface, oceans, sea ice, and clouds into a seamless, true-color mosaic of every square kilometer (.386 square mile) of our planet. These images are freely available to educators, scientists, museums, and the public. This record includes preview images and links to full resolution versions up to 21,600 pixels across. Much of the information contained in this image came from a single remote-sensing device-NASA’s Moderate Resolution Imaging Spectroradiometer, or MODIS.

Flying over 700 km above the Earth onboard the Terra satellite, MODIS provides an integrated tool for observing a variety of terrestrial, oceanic, and atmospheric features of the Earth. Note: Often times, due to the size, browsers have a difficult time opening and displaying images.

Post 9-11-2001 Police State. Cosmos. A new view from the zoo. Capitalism Is the Enemy of Democracy. The most significant accomplishment for Occupy Wall Street (OWS) to date is that the Occupiers have managed to poke a hole in the legitimacy of neoliberal capitalism and its central claim that unregulated markets provide opportunity and freedom. 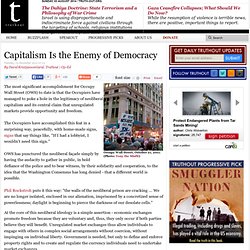 The Occupiers have accomplished this feat in a surprising way, peacefully, with home-made signs, signs that say things like, "If I had a lobbyist, I wouldn't need this sign. " OWS has punctured the neoliberal façade simply by having the audacity to gather in public, in bold defiance of the police and to bear witness, by their solidarity and cooperation, to the idea that the Washington Consensus has long denied - that a different world is possible.

Social philosophy. Social philosophy is the study of questions about social behavior and interpretations of society and social institutions in terms of ethical values rather than empirical relations.[1] Social philosophers place new emphasis on understanding the social contexts for political, legal, moral, and cultural questions, and to the development of novel theoretical frameworks, from social ontology to care ethics to cosmopolitan theories of democracy, human rights, gender equity and global justice.[2] Subdisciplines[edit] Social philosophy, ethics, and political philosophy all share intimate connections with other disciplines in the social sciences. 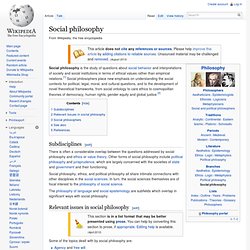 Where to from now? Timeline of the far future. KIC 12557548. History of detection[edit] The existence of the planet was first evidenced in data collected by the Kepler spacecraft. 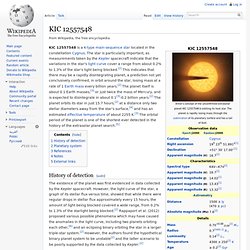 However, the light curve of the star, a graph of its stellar flux versus time, showed that while there were regular drops in stellar flux approximately every 15 hours, the amount of light being blocked covered a wide range, from 0.2% to 1.3% of the starlight being blocked.[2] Rappaport et al. (2012) proposed various possible phenomena which may have caused the anomalies in the light curve, including two planets orbiting each other,[6] and an eclipsing binary orbiting the star in a larger triple-star system.[2] However, the authors found the hypothetical binary planet system to be unstable[2] and the latter scenario to be poorly supported by the data collected by Kepler.[2] Planetary system[edit] References[edit] ^ Jump up to: a b c d e f "Basic data: 2MASS J19235189+5130170 -- Infra-Red source".

Brogi, M.; Keller, C. Notes[edit] External links[edit] History of the Earth. The history of the Earth concerns the development of the planet Earth from its formation to the present day.[1][2] Nearly all branches of natural science have contributed to the understanding of the main events of the Earth's past. 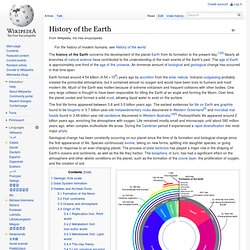 The age of Earth is approximately one-third of the age of the universe. An immense amount of biological and geological change has occurred in that time span. The first life forms appeared between 3.8 and 3.5 billion years ago. The earliest evidences for life on Earth are graphite found to be biogenic in 3.7 billion-year-old metasedimentary rocks discovered in Western Greenland[3] and microbial mat fossils found in 3.48 billion-year-old sandstone discovered in Western Australia.[4][5] Photosynthetic life appeared around 2 billion years ago, enriching the atmosphere with oxygen. Life remained mostly small and microscopic until about 580 million years ago, when complex multicellular life arose. Geologic time scale[edit] Future of the Earth. Tidal acceleration. A picture of the Earth and the Moon from Mars. 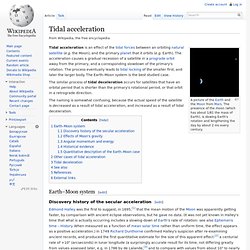 The presence of the moon (which has about 1/81 the mass of Earth), is slowing Earth's rotation and lengthening the day by about 2 ms every century. Tidal acceleration is an effect of the tidal forces between an orbiting natural satellite (e.g. the Moon), and the primary planet that it orbits (e.g. Earth). Stability of the Solar System. Ross 248. This star has about 12% of the Sun's mass and 16% of the Sun's radius, but only 0.2% of the Sun's luminosity. 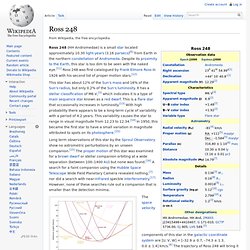 It has a stellar classification of M6 V,[3] which indicates it is a type of main sequence star known as a red dwarf. This is a flare star that occasionally increases in luminosity.[13] With high probability there appears to be a long-term cycle of variability with a period of 4.2 years. This variability causes the star to range in visual magnitude from 12.23 to 12.34.[14] In 1950, this became the first star to have a small variation in magnitude attributed to spots on its photosphere.[15] Home Page. Holocene extinction. Mrs. Maria Reiche from Nasca. Chronology. From: -- Aurelio Baltazar Muñoz Alarcón: "Después de María... 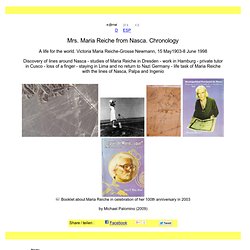 ¿qué? En el centenario de su nacimiento" (in Engl..: "After Maria... what will come? "); in collaboration with Willy Rojas, Suhara Digital, Carlos Muñoz Alarcón; booklet of Province Administration of Nasca in celebration of 100th anniversary of Maria Reiche 1903 2003. Thank you Maria! Purchased in Nasca in August 2009 in the library at Main Square (Playa Mayor, Playa de Armas) of Nasca.