Unbelievable Skeletons Unearthed From The Catacombs Of Rome 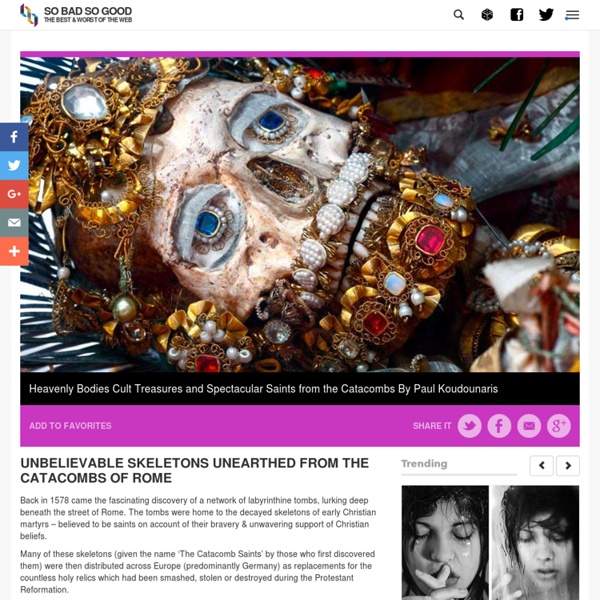 Back in 1578 came the fascinating discovery of a network of labyrinthine tombs, lurking deep beneath the street of Rome. The tombs were home to the decayed skeletons of early Christian martyrs – believed to be saints on account of their bravery & unwavering support of Christian beliefs. Many of these skeletons (given the name ‘The Catacomb Saints’ by those who first discovered them) were then distributed across Europe (predominantly Germany) as replacements for the countless holy relics which had been smashed, stolen or destroyed during the Protestant Reformation. Once delivered, each skeleton was then clothed and adorned into a variety of precious jewels, expensive cloth, crowns, armour and even given wigs. They were put on display inside their designated churches as a reminder to all who visited, for the riches and wealth that awaited them post death – providing they swore allegiance to the Christian faith. It sounds like a tale straight from a Dan Brown novel doesn't it?

Related:  Archeology • History and Geography • A Long Time Ago • What we Create

100 Incredible YouTube Channels for History Buffs » Online College Search If you love history, or just want to learn more about it, YouTube has exactly what you need. Always up to the challege of providing thorough, accurate information, YouTube delivers channels from leading names in historical studies, from The Smithsonian to the Discovery Channel. You’re sure to find just the right information you need for your lecture, lesson plan, or perhaps just your personal viewing pleasure. General History British have invaded nine out of ten countries - so look out Luxembourg The analysis is contained in a new book, All the Countries We've Ever Invaded: And the Few We Never Got Round To. Stuart Laycock, the author, has worked his way around the globe, through each country alphabetically, researching its history to establish whether, at any point, they have experienced an incursion by Britain. Only a comparatively small proportion of the total in Mr Laycock's list of invaded states actually formed an official part of the empire. The remainder have been included because the British were found to have achieved some sort of military presence in the territory – however transitory – either through force, the threat of force, negotiation or payment. Incursions by British pirates, privateers or armed explorers have also been included, provided they were operating with the approval of their government. Among some of the perhaps surprising entries on the list are:

Saved by fire: breads in archeology Of all artifacts in archeology, bread might be the least likely to survive. It is made after all to be consumed, to disintegrate in liquids, to crumble. And yet... it does. Sculptures of post-apocalyptic people in disturbing situations A curious sculpture by Kirsten Stingle Atlanta-based sculptor and ceramist Kirsten Stingle found her calling after being profoundly affected by the horrific events of 9/11. She decided that she needed to get back to the creative roots that she had originally grown while a member of a long-running theater group in Florida. So she left her career in social welfare, but this time instead of getting her creative kicks from acting, Stingle delved into the delicate art of ceramic sculpture.

Swedish divers unearth a 'Stone Age Atlantis': 11,000-year-old ancient settlement discovered under the Baltic Sea Divers found a harpoon, tools, horns and the bones of ancient cattle The bones belonged to the animal auroch last seen in the early 1600sArchaeologists believe these relics date back to the Stone AgeIt is said to be the oldest settlement in the area - dubbed Sweden’s 'Atlantis' By Victoria Woollaston Published: 16:06 GMT, 27 January 2014 | Updated: 17:16 GMT, 27 January 2014 Divers in Sweden have discovered a rare collection of Stone Age artefacts buried deep beneath the Baltic Sea. Archaeologists believe the relics were left by Swedish nomads 11,000 years ago and the discovery may be evidence of one of the oldest settlements ever found in the Nordic region. Some of the relics are so well preserved, reports have dubbed the find 'Sweden’s Atlantis' and suggested the settlement may have been swallowed whole by the sea in the same way as the mythical island in the Atlantic Ocean.

11 Amazing Thank You Notes From Famous People Letters of Note is one of our favorite places to hang out. Since 2009 the site has curated hundreds of interesting letters, telegrams, memos and faxes, from famous people, regular people, and even fictional people. We took advantage of their hard work and rounded up these 11 thank you (and one thanks-for-nothing) letters from their archives. 1. Thank You for the Dream You Sent Me In ancient Egypt, summer was the season for making babies Courtesy of Lana Williams Here, the burial site of a child found in an 1,800-year-old cemetery at the Dakhleh Oasis in Egypt. By Owen JarusLiveScience The peak period for baby-making sex in ancient Egypt was in July and August, when the weather was at its hottest. Researchers made this discovery at a cemetery in the Dakhleh Oasis in Egypt whose burials date back around 1,800 years. The oasis is located about 450 miles (720 kilometers) southwest of Cairo.

Autos - Why is train-seat fabric so ugly? No matter how many subway lines, buses, trams, trains, and other public conveyances we ride, we are rarely left with a positive impression of the upholstery. (We typically leave an impression on the upholstery itself, so we suppose that’s fair.) As sure as roses are red and violets blue, transport fabric is a multihued graphic abomination, possibly crawling with pathogens. How does this happen, we’d like to know, and is this simply the crossweave that we must bear? The answer is as unsurprising as a congestion delay, and as complicated as getting to LaGuardia on public transport.