This Pearltree is for Club TED at Avon Old Farms School in Avon, CT. We will pearl any video that we watch in the club.

Knowledge is obsolete, so now what?: Pavan Arora at TEDxFoggyBottom. Education Ted Talks. Dan Ariely on the Truth About Dishonesty, Animated. Renny Gleeson: 404, the story of a page not found. ‘This Is Water’: Complete Audio of David Foster Wallace’s Kenyon Graduation Speech (2005) Last month, on the occasion of the author’s 50th birthday, we posted a large collection of free essays and stories by David Foster Wallace. 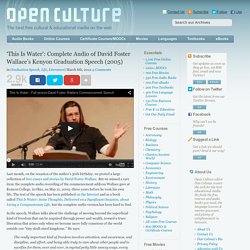 But we missed a rare item: the complete audio recording of the commencement address Wallace gave at Kenyon College, in Ohio, on May 21, 2005–three years before he took his own life. The text of the speech has been published on the Internet and as a book called This Is Water: Some Thoughts, Delivered on a Significant Occasion, about Living a Compassionate Life, but the complete audio version has been hard to find.

In the speech, Wallace talks about the challenge of moving beyond the superficial kind of freedom that can be acquired through power and wealth, toward a truer liberation that arises only when we become more fully conscious of the world outside our “tiny skull-sized kingdoms.” Ted Talks. Shimon Schocken: The self-organizing computer course. 10 talks on making schools great. With just over a month to go before the 2012 presidential election in the US, eyes around the world are on the contest between Barack Obama and Mitt Romney. 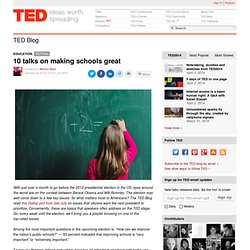 The election may well come down to a few key issues. So what matters most to Americans? The TED Blog read this Gallup poll from late July on issues that citizens want the next president to prioritize. Conveniently, these are topics that speakers often address on the TED stage. So, every week until the election, we’ll bring you a playlist focusing on one of the top-rated issues. 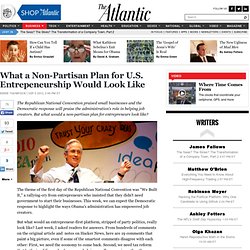 But what would a non-partisan plan for entrepreneurs look like? The theme of the first day of the Republican National Convention was "We Built It," a rallying-cry from entrepreneurs who insisted that they didn't need government to start their businesses. This week, we can expect the Democratic response to highlight the ways Obama's administration has empowered job creators.

But what would an entrepreneur-first platform, stripped of party politics, really look like? Last week, I asked readers for answers. Here are your ideas... It all starts with consumers... Address the housing/household debt crisis. How health care costs pushed an entrepreneur into government work Six years into my law enforcement career, I was hospitalized with a major illness. Barry Schwartz: Using our practical wisdom. 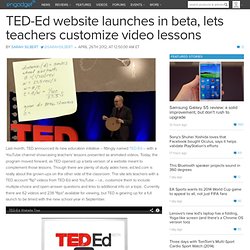 "Kohl's is committed to kids' education and we are thrilled to partner with TED to provide inspiring educational tools for teachers and students around the world" TED-Ed seeks to inspire curiosity by harnessing the talent of the world's best teachers and visualizers – and by providing educators with new tools that spark and facilitate learning.