ACLU: Meet the Prison Profiteers. They’re Worse than You Think. Global Tel-Link This price-gouging phone company profits off love, charging prisoners up to $17 for a 15-minute phone call. 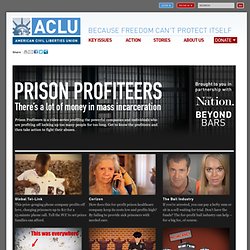 Tell the FCC to set prices families can afford. Corizon How does this for-profit prison healthcare company keep its costs low and profits high? By failing to provide sick prisoners with needed care. U.S. incarceration rates 1925 onwards.png - Wikipedia, the free encyclopedia. Banking on Bondage: Private Prisons and Mass Incarceration, Profit and Loss. November 2, 2011 Executive Summary The imprisonment of human beings at record levels is both a moral failure and an economic one — especially at a time when more and more Americans are struggling to make ends meet and when state governments confront enormous fiscal crises. 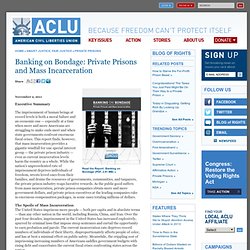 This report finds, however, that mass incarceration provides a gigantic windfall for one special interest group — the private prison industry — even as current incarceration levels harm the country as a whole. While the nation's unprecedented rate of imprisonment deprives individuals of freedom, wrests loved ones from their families, and drains the resources of governments, communities, and taxpayers, the private prison industry reaps lucrative rewards.

As the public good suffers from mass incarceration, private prison companies obtain more and more government dollars, and private prison executives at the leading companies rake in enormous compensation packages, in some cases totaling millions of dollars. The Shocking Ways the Corporate Prison Industry Games the System. November 29, 2011 | Like this article? 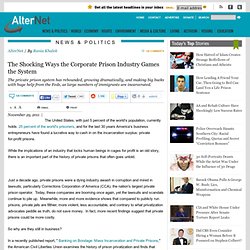 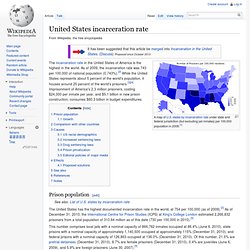 NYT: U.S. prison population dwarfs that of other nations. Bankingonbondage(pdf) Mass Incarceration and Criminal Justice in America. A prison is a trap for catching time. 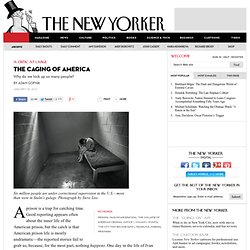 Good reporting appears often about the inner life of the American prison, but the catch is that American prison life is mostly undramatic—the reported stories fail to grab us, because, for the most part, nothing happens. In Prison Reform, Money Trumps Civil Rights. 21st-Century Slaves: How Corporations Exploit Prison Labor. This article has been updated. 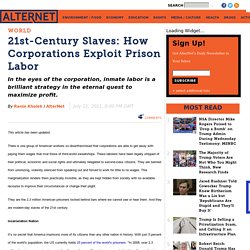 There is one group of American workers so disenfranchised that corporations are able to get away with paying them wages that rival those of third-world sweatshops. These laborers have been legally stripped of their political, economic and social rights and ultimately relegated to second-class citizens. They are banned from unionizing, violently silenced from speaking out and forced to work for little to no wages. This marginalization renders them practically invisible, as they are kept hidden from society with no available recourse to improve their circumstances or change their plight.

They are the 2.3 million American prisoners locked behind bars where we cannot see or hear them. Incarceration Nation. Gaming the System: How the Political Strategies of Private Prison Companies Promote Ineffective Incarceration Policies — Justice Policy Institute. Paul Ashton, Justice Policy Institute Published: June 22, 2011 At a time when many policymakers are looking at criminal and juvenile justice reforms that would safely shrink the size of our prison population, the existence of private prison companies creates a countervailing interest in preserving the current approach to criminal justice and increasing the use of incarceration. 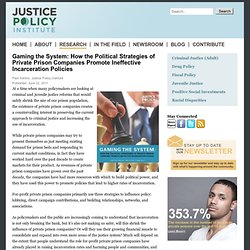 While private prison companies may try to present themselves as just meeting existing demand for prison beds and responding to current market conditions, in fact they have worked hard over the past decade to create markets for their product. As revenues of private prison companies have grown over the past decade, the companies have had more resources with which to build political power, and they have used this power to promote policies that lead to higher rates of incarceration. 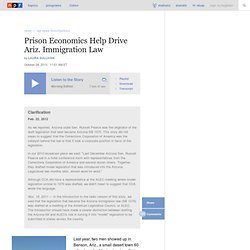 " Laura Sullivan/NPR Last year, two men showed up in Benson, Ariz., a small desert town 60 miles from the Mexico border, offering a deal. Glenn Nichols, the Benson city manager, remembers the pitch. "The gentleman that's the main thrust of this thing has a huge turquoise ring on his finger," Nichols said. "He's a great big huge guy and I equated him to a car salesman. " Private prisons: The perverse incentives of private prisons. Private Prisons:Profits of Crime. By Phil Smith from the Fall 1993 issue of Covert Action Quarterly Private prisons are a symptom, a response by private capital to the "opportunities" created by society's temper tantrum approach to the problem of criminality. 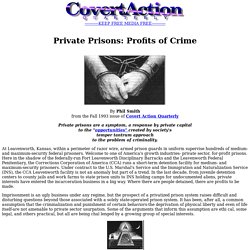 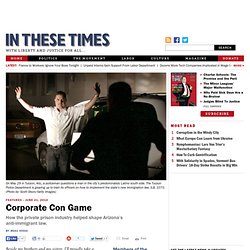 Honest John - Occupy L.A. - Prisons for Profit. Death For Profit. Occupy A Private Prison: Shut Down Stewart Detention Center. Stuff They Don't Want You to Know - Prisons and Profit. Why OCCUPY? Prisons for Profit. The GEO Group Inc. Inmates In Private Georgia Prison Charged Five Dollars Per Minute For Phone Calls. The Hidden History of ALEC and Prison Labor. Years after ALEC's Truth In Sentencing bills became the law of the land, its Prison Industries Act has quietly expanded prison labor across the country.

This article is part of a Nation series exposing the American Legislative Exchange Council, in collaboration with the Center For Media and Democracy. John Nichols introduces the series. About the Author Bob Sloan Bob Sloan is a former offender, Stop ALEC organizer and blogger who has spent the past decade researching the PIE... Mike Elk Mike Elk is a labor journalist and third-generation union organizer based in Washington, D.C. Also by the Author Letters obtained by The Nation show that companies involved in the oil, gas and coal industries are increasingly pushing workers to vote Republican. Occupy a Private Prison: Occupy Corrections Corporation of America. Overincarceration clips. "Private Prisons Don't Work"