At ButtonSpace. The Reality of Chinese Bitcoin Trading Volumes. Posts on China’s premier social network Weibo have suggested that some of the country’s largest bitcoin exchanges are manipulating trading volumes to gain more customers and rise through the ranks of the world’s most popular exchanges. 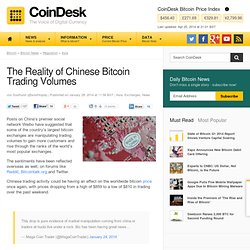 The sentiments have been reflected overseas as well, on forums like Reddit, Bitcointalk.org and Twitter. Chinese trading activity could be having an effect on the worldwide bitcoin price once again, with prices dropping from a high of $859 to a low of $810 in trading over the past weekend. This drop is pure evidence of market manipulation coming from china or traders at huobi live under a rock.

Btc has been having great news…— Mega Coin Trader (@MegaCoinTrader) January 24, 2014 Graphs and charts appear to back up the claims with some odd figures, with some showing bid prices for bitcoin actually higher than ask prices, or even dead level. Shenanigans, right? Delicate dance Things have changed since. But were the position shifts due to real market forces?

Can Hong Kong Lead the Way for Bitcoin Adoption Across China? Sixty-five years ago, history tells us the great question of American foreign policy was: who lost China? 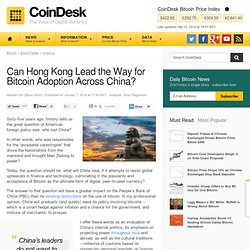 In other words, who was responsible for the “avoidable catastrophe” that drove the Nationalists from the mainland and brought Mao Zedong to power? Today, the question should be: what will China lose, if it attempts to resist global upheavals in finance and technology, culminating in the popularity and acceptance of Bitcoin as the ultimate form of digital, peer-to-peer currency? After Crackdown, a New Bitcoin King Emerges in China. 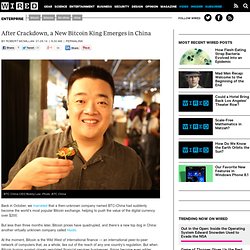 Photo: BTC China Back in October, we marveled that a then-unknown company named BTC-China had suddenly become the world’s most popular Bitcoin exchange, helping to push the value of the digital currency over $200. But less than three months later, Bitcoin prices have quadrupled, and there’s a new top dog in China: another virtually unknown company called Huobi. At the moment, Bitcoin is the Wild West of international finance — an international peer-to-peer network of computers that, as a whole, lies out of the reach of any one country’s regulation. But when Bitcoin bumps against closely regulated financial services businesses, things become even wilder.

Big Chinese businesses that were warming up to Bitcoin, such as search giant Baidu, suddenly dropped it. It appeared that the government was going to make it tricky, if not impossible, to fund Bitcoin exchange accounts. How long Huobi will be able to stay on top, however, is unclear. Chinese Exchange Sends Bitcoin Price Tumbling. China moves against Bitcoin. 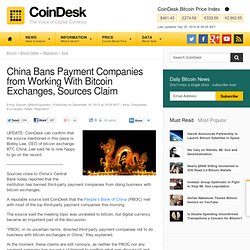 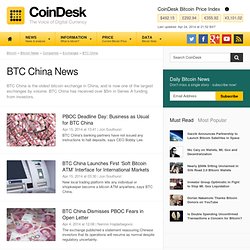 . | Daniel Cawrey. Why China is Leading the Global Rise of Bitcoin. The bitcoin story in China sounds like a mini-metaphor for the Chinese economy itself: while the rest of the world was looking elsewhere, its citizens worked to acquire vast amounts of new wealth before bursting into the headlines only recently as a superpower. 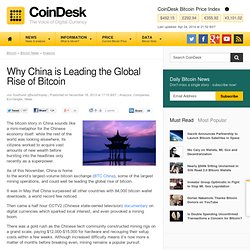 As of this November, China is home to the world’s largest-volume bitcoin exchange (BTC China), some of the largest mining operations, and could well be leading the global rise of bitcoin. It was in May that China surpassed all other countries with 84,000 bitcoin wallet downloads, a world record few noticed. Then came a half hour CCTV2 (Chinese state-owned television) documentary on digital currencies which sparked local interest, and even provoked a mining boom. There was a gold rush as the Chinese tech community constructed mining rigs on a grand scale, paying $12,000-$15,000 for hardware and recouping their setup costs within a few weeks. Jing Daily: The Business of Luxury and Culture in China. Bitcoin luxury e-tailer BitPremier has its sights on the China market. 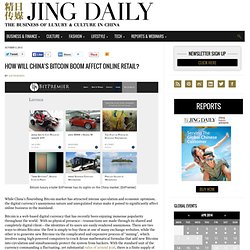 (BitPremier) While China’s flourishing Bitcoin market has attracted intense speculation and economic optimism, the digital currency’s anonymous nature and unregulated status make it poised to significantly affect online business in the mainland. Bitcoin is a web-based digital currency that has recently been enjoying immense popularity throughout the world. With no physical presence—transactions are made through its shared and completely digital client—the identities of its users are easily rendered anonymous. There are two ways to obtain Bitcoins: the first is simply to buy them at one of many exchange websites, while the other is to generate new Bitcoins via the complicated and expensive process of “mining”, which involves using high-powered computers to crack dense mathematical formulas that add new Bitcoins into circulation and simultaneously protect the system from hackers.