12 questions about Bitcoin you were too embarrassed to ask. This has been a big week for Bitcoin. 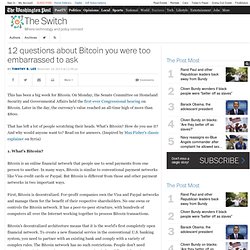 On Monday, the Senate Committee on Homeland Security and Governmental Affairs held the first-ever Congressional hearing on Bitcoin. Later in the day, the currency's value reached an all-time high of more than $800. That has left a lot of people scratching their heads. What's Bitcoin? How do you use it? 1. Bitcoin is an online financial network that people use to send payments from one person to another. First, Bitcoin is decentralized. Bitcoin's decentralized architecture means that it is the world's first completely open financial network. The second thing that makes the Bitcoin unique is that it comes with its own currency. 2. It is weird. This graph shows the price of one Bitcoin since the start of 2011, when the currency began to adopt mainstream attention. Bitcoin has captured the imagination of venture capitalists.

Why are people so excited? 3. I just mentioned Bitpay. Bitpay works with a wide variety of merchants. 4. RSA Cipher Explained. How is block-solution-withholding a threat to mining pools. Every pool is vulnerable to the threat. 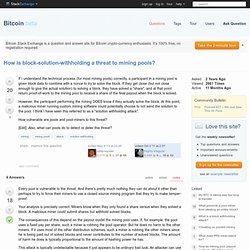 And there's pretty much nothing they can do about it other than perhaps to try to force their miners to use a closed source mining program that they try to make tamper-proof. Your analysis is precisely correct. Miners know when they only found a share versus when they solved a block. A malicious miner could submit shares but withhold solved blocks. The consequences of this depend on the payout model the mining pool uses. This attack is typically undetectable because it just appears to be ordinary bad luck.

There are generally two motives for such an attack, depending on the payout plan the pool uses. The consensus is that such attacks are likely to remain rare and generally insignificant. Note that it is not possible for an attacker to submit any blocks he finds himself and keep the profits. Euclidean Algorithm. The Euclidean algorithm, also called Euclid's algorithm, is an algorithm for finding the greatest common divisor of two numbers and . 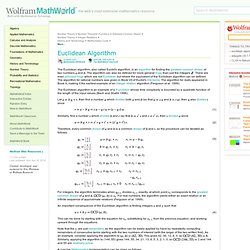 The algorithm can also be defined for more general rings than just the integers . There are even principal rings which are not Euclidean but where the equivalent of the Euclidean algorithm can be defined. The Euclidean algorithm is an example of a P-problem whose time complexity is bounded by a quadratic function of the length of the input values (Bach and Shallit 1996). Let , then find a number which divides both (so that ), then also divides since Similarly, find a number which divides divides Therefore, every common divisor of is a common divisor of , so the procedure can be iterated as follows: For integers, the algorithm terminates when divides exactly, at which point corresponds to the greatest common divisor of.

HTG Explains: What is Bitcoin and How Does it Work? Geeks have had their own “money” for some time, but typically it is within the context of online gaming. While this digital currency does possess intrinsic value, the market for it is usually limited to other gamers. However, 2009 gave rise to another form of digital currency, bitcoin, which has demonstrated some global demand as a medium for exchange. Image credit: Zack Copley Editor’s Note: we want to make it very clear right up front that we are not recommending that you invest in Bitcoins. It’s very likely that you will lose money. How it Works In its essence, bitcoin is a crypto-currency implemented entirely with open source specifications and software which relies entirely on a peer-to-peer network for both transaction processing and validation.

A bitcoin is simply an SHA-256 hash (which is an extremely large number) in hexadecimal format. What is Bitcoin? - We Use Coins. [English] White Paper · ethereum/wiki Wiki. A Next-Generation Smart Contract and Decentralized Application Platform When Satoshi Nakamoto first set the Bitcoin blockchain into motion in January 2009, he was simultaneously introducing two radical and highly untested concepts. 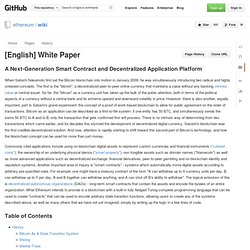 The first is the "bitcoin", a decentralized peer-to-peer online currency that maintains a value without any backing, intrinsic value or central issuer. So far, the "bitcoin" as a currency unit has taken up the bulk of the public attention, both in terms of the political aspects of a currency without a central bank and its extreme upward and downward volatility in price. However, there is also another, equally important, part to Satoshi's grand experiment: the concept of a proof of work-based blockchain to allow for public agreement on the order of transactions. Table of Contents Introduction to Bitcoin and Existing Concepts History Bitcoin As A State Transition System APPLY(S,TX) -> S' or ERROR In the banking system defined above: But: [English] White Paper · ethereum/wiki Wiki.