Disenfranchised by Bad Design. Visual Evidence Data and design in everyday life Lena Groeger This Nov. 8, even if you manage to be registered in time and have the right identification, there is something else that could stop you from exercising your right to vote. 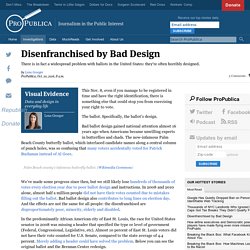 The ballot. Specifically, the ballot’s design. Bad ballot design gained national attention almost 16 years ago when Americans became unwilling experts in butterflies and chads. We’ve made some progress since then, but we still likely lose hundreds of thousands of votes every election year due to poor ballot design and instructions. In the predominantly African American city of East St. “When we design things in a way that doesn’t work for all voters, we degrade the quality of democracy,” said Whitney Quesenbery, a ballot expert and co-director of the Center for Civic Design, an organization that uses design to ensure voters vote the way they want to on Election Day. Elections Maps - Daily Kos. Welcome to the Daily Kos Elections cartography division! 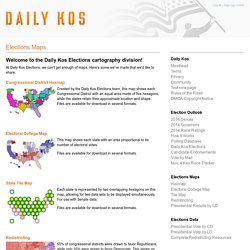 At Daily Kos Elections, we can't get enough of maps. Here's some we've made that we'd like to share: Congressional District Hexmap Created by the Daily Kos Elections team, this map shows each Congressional District with an equal area made of five hexagons, while the states retain their approximate location and shape. Files are available for download in several formats. Electoral College Map This map shows each state with an area proportional to its number of electoral votes. 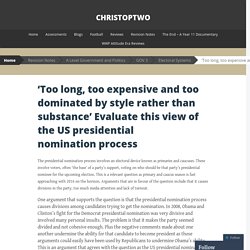 These involve voters, often ‘the base’ of a party’s support, voting on who should be that party’s presidential nominee for the upcoming election. US election 2016: The £3 billion, two-year long polling process that could put Donald Trump in the White House. Is the American way of electing presidents crazy? 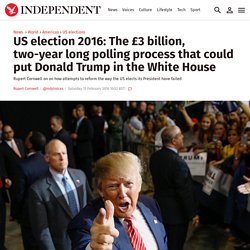 Let’s answer that question with another question. Would anyone in their right mind settle on a process that costs $5bn (£3.5bn), lasts for two years, in which you don’t even vote directly for your preferred candidate, in which turnout hasn’t topped 60 per cent in half a century – and which might end up sending Donald Trump to the White House? The answer plainly is no.

The US Electoral System (and 2016!) Does America need to change the way it elects Presidents? 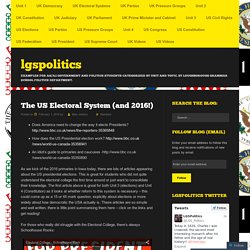 Does the US Presidential election work? Idiot’s guide to primaries and caucuses - As we kick of the 2016 primaries in Iowa today, there are lots of articles appearing about the US presidential elections. This is great for students who did not quite understand the electoral collage the first time around or just want to consolidate their knowledge. The first article above is great for both Unit 3 (elections) and Unit 4 (Constitution) as it looks at whether reform to this system is necessary – this could come up as a 15 or 45 mark question, explicitly about elections or more widely about how democratic the USA actually is. Scott Walker Dramatically Rewrites Election Rules In Wisconsin.

A Point of View: The rude, vulgar US presidential election. The race for the White House can appear a ridiculous spectacle to the casual observer. 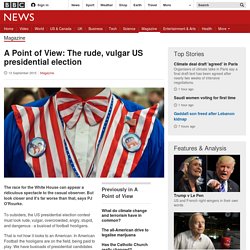 But look closer and it's far worse than that, says PJ O'Rourke. To outsiders, the US presidential election contest must look rude, vulgar, overcrowded, angry, stupid, and dangerous - a busload of football hooligans. That is not how it looks to an American. In American Football the hooligans are on the field, being paid to play. We have busloads of presidential candidates instead. And when those busloads of presidential candidates roll into our towns, we Americans would, if we legally could - first amendment, free speech rights and all that - jam the bus doors shut and send the candidates down the road to the next town, or to someplace much warmer. Who are all these jacklegs, high-binders, wire-pullers, mountebanks, swellheads, buncombe spigots, boodle artists, four-flushers and animated spittoons offering themselves as worthy of our nation's highest office?

From draping their slogans over covered wagons to debating on grainy black-and-white news broadcasts, candidates have had to drastically alter their campaign tactics over the past 115 years. Theodore Roosevelt, pictured above addressing a crowd of suffragettes, was the 26th president and the first to be newly elected in the 20th century. Roosevelt won the election in 1904 after having assumed office upon the death of President William McKinley in 1901. (Hulton Archive/Getty Images) The 1908 presidential election came down to Republican William Howard Taft and Democrat William Jennings Bryan. High-angle view of crowds on the floor of the Republican National Convention in Chicago during the opening address on June 16, 1908.