'I'll be broke if I live to 100' Dying to get through the US-Mexico border. Women in China contribute more to GDP than in the US - viewing them as "leftover" is problematic. There are 7 million urban single ladies between the ages of 25 and 34 in China. 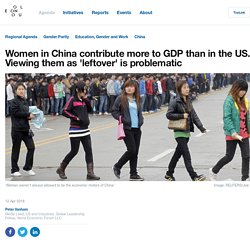 The part these women play in the Chinese miracle is sometimes overlooked, even though these young, urban, well-educated and single women are among the greatest contributors to their country’s growth. Indeed, their contribution comes with a price, writes Roseann Lake in her new book Leftover in China: “[O]n paper, these women are pushing toward the upper echelon of the self-actualization pyramid. But as unmarried women, they teeter toward the bottom half of what is socially acceptable in China.” So exactly what role should the “leftover women” play in China’s economy and society?

First off, it’s important to note that women weren’t always (allowed to be) the economic motors of China, as Lake writes: “[U]ntil 1906, most Chinese women had their feet bound. But after this tough start, two side-effects of communist rule dramatically changed the country’s gender dynamic. Image: World Bank Share Written by. How long are you going to live? Japan's single women a burden on the state, MP says. Image copyright Getty Images An MP from Japan's governing party has been accused of sexism after he said young Japanese women should have more children or face being a burden on the state. 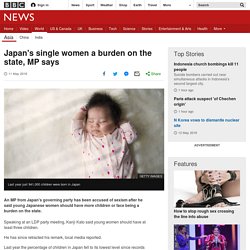 Speaking at an LDP party meeting, Kanji Kato said young women should have at least three children. He has since retracted his remark, local media reported. Last year the percentage of children in Japan fell to its lowest level since records began more than 100 years ago. Financial and other incentives to encourage bigger families have had little impact. Unequal Scenes - Mumbai. Simply put, Mumbai is...fascinating. 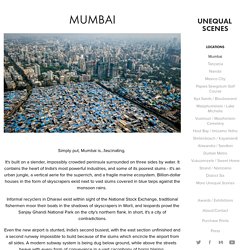 It's built on a slender, impossibly crowded peninsula surrounded on three sides by water. It contains the heart of India's most powerful industries, and some of its poorest slums - it's an urban jungle, a vertical aerie for the superrich, and a fragile marine ecosystem. Billion-dollar houses in the form of skyscrapers exist next to vast slums covered in blue tarps against the monsoon rains. Informal recyclers in Dharavi exist within sight of the National Stock Exchange, traditional fishermen moor their boats in the shadows of skyscrapers in Worli, and leopards prowl the Sanjay Ghandi National Park on the city's northern flank.

In short, it's a city of contradictions. Lonely Chinese pensioner puts himself up for adoption. Even as birth rates decline overpopulation remains a global challenge. The vision of a post-apocalyptic overpopulated world has been a favourite nightmare scenario of science-fiction writers and filmmakers for decades: think Blade Runner and Soylent Green. 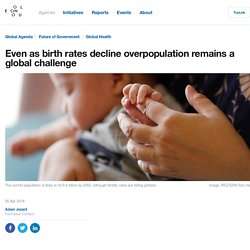 But data from a variety of sources – including the UN and the World Bank – indicates that the total number of live births is falling around the world, including in developing nations. Image: Bloomberg/World Bank Some commentators have suggested the decrease in fertility rates is good news for our descendants who will escape gruesome deaths brought on by food shortages and starvation, like in the movies.

In previous generations, national birth rates were high as adult populations reproduced to ensure they would be taken care of in old age, and parents frequently had many children as insurance against high infant mortality rates. However, factors such as the development of more effective medicines and improved access to education for women may be contributing to declining fertility rates. Theaustralian.com. TED-Ed - Why is Rwanda’s population skyrocketing, while...

Migrant crossings ‘are most treacherous ever’ N5 Human Geography: Population and Development Topic Revision by Mr T Simpson on Prezi. Why have four children when you could have seven? Family planning in Niger. Roukaya Hamani has an in-law problem. 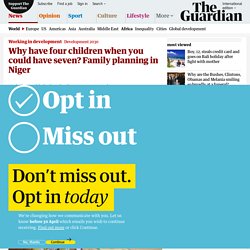 Her husband’s parents want more grandbabies, but she doesn’t want any more children right now. She’s already given birth four times; one of the babies died, and so now she has three, ages seven, five, and 16 months. The Oil-Gas War Over Syria, in Maps. Eric Zuesse Turkey’s Anadolu News Agency, though government-run, is providing remarkably clear and reliable diagrammatic descriptions of the current status of the U.S-and-fundamentalist-Sunni, versus Russia-and-Shia-and-NON-fundamentalist-Sunni, sides, in the current oil-and-gas war in the Middle East, for control over territory in Syria, for construction of oil-and-gas pipelines through Syria supplying fuel into the world’s largest energy-market: Europe. 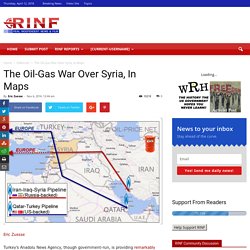 Russia is now the dominant supplier of both oil and gas, but its ally Iran is a Shiite gas-powerhouse that wants to share the market there, and Russia has no objection. 'This is death to the family': Japan's fertility crisis is creating economic and social woes never seen before. A Japanese soccer fan after Japan loses its 2014 World Cup soccer match against Colombia. 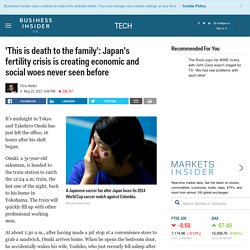 Reuters/Issei Kato It's midnight in Tokyo and Takehiro Onuki has just left the office, 16 hours after his shift began. Onuki, a 31-year-old salesman, is headed to the train station to catch the 12:24 a.m. train, the last one of the night, back to his home in Yokohama. The train will quickly fill up with other professional working men. At about 1:30 a.m., after having made a pit stop at a convenience store to grab a sandwich, Onuki arrives home. Then, with his food still digesting and his alarm set for 7 a.m., he creeps into bed, ready to do it all again tomorrow. China's radical plan to limit the populations of Beijing and Shanghai. In the weaving alleys of Shanghai’s Laoximen district, swathes of residential buildings sit empty. 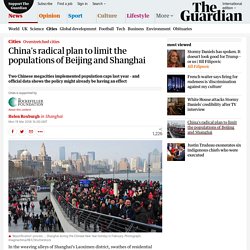 The historic area in the heart of the city is being slowly demolished, and many residents have already abandoned it, leaving behind rows of traditional terraced houses with boarded-up windows and demolition signs on the doors. Laoximen is one of a number of neighbourhoods in Shanghai to be “upgraded” in the city’s relentless race for modernity. The redevelopments are a reaction to the city’s runaway growth, and key contributors to the first population falls in Shanghai and Beijing for decades. Reducing population has been heralded as an answer to “big city disease”, characterised by state media as an overcrowded, polluted city with too many people living in it. As a result, both Shanghai and Beijing, the Chinese capital, implemented population caps last year, leaving little room for additional growth – Shanghai plans to limit the population to 25 million, Beijing to 23 million. The Biggest Refugee Camp Braces for Rain: ‘This Is Going to Be a Catastrophe’

BBC iPlayer - Panorama - Immigration: Who Should We Let In? Living in a globalised world. BBC iPlayer - Panorama - Africa's Billion Pound Migrant Trail. Do It For Denmark! Population pyramids: Powerful predictors of the future - Kim Preshoff. Pakistan birth rate a 'disaster in the making' as population passes 207 million. For years, Pakistan’s soaring population growth has been evident in increasingly crowded schools, clinics and poor communities across this vast, Muslim-majority nation. 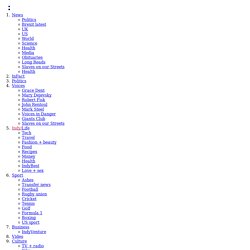 But until two weeks ago, no one knew just how serious the problem was. Now they do. Preliminary results from a new national census — the first conducted since 1998 — show that the population has grown by 57 per cent since then, reaching 207.7 million and making Pakistan the world’s fifth-most-populous country, surpassing Brazil and ranking behind China, India, the United States and Indonesia. The annual birth-rate, while gradually declining, is still alarmingly high. At 22 births per 1,000 people, it is on a par with Bolivia and Haiti, and among the highest outside Africa. Unequal Scenes: A new perspective on an old problem. Loresho/Kawangare, Nairobi (2016). © Johnny Miller. 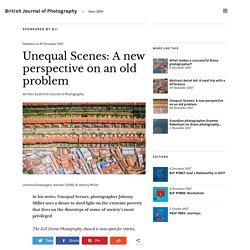 In his series, Unequal Scenes, photographer Johnny Miller uses a drone to shed light on the extreme poverty that lives on the doorsteps of some of society’s most privileged The DJI Drone Photography Award is now open for entries, giving two photographers the chance to realise their dream drone-shot photography project. Submit your proposal now! Aerial photography boasts a certain honesty. While from the ground, structures can be sheltered from public view, tucked behind pristine hedges or towering fences, when viewed from the sky there are few places to hide. Unequal Scenes is a series of photographs taken first in South Africa, and later across the world, that sheds light on the unequal distribution of wealth and inequality currently present in society. The World's Population & Demographic Resources - Videos & Lessons. Inequality ... in a photograph. How did you come to take this photo? I took the photo for the Folha de São Paulo newspaper, for a special report on the 450th anniversary of São Paulo in 2004.

It was taken from a helicopter following a suggestion by my colleague Marlene Bergamo. But when I took it, I had no idea it would become so popular. What does the photo show, in your opinion? It is clearly an illustration of social inequality, maybe the biggest problem for Brazil and Latin America. Inequality means that someone who is poorer is obliged to work more, so they have no time to study, which impacts on their education. I am happy to have taken a photograph that expresses this problem and has acquired importance, especially in view of the immense quantity of photographs that we produce today.

UK population to pass 70m in 2029, ONS projections say. You draw the chart: How has life changed in 60 years? Drop in Teen Birthrate Helps Drive Decline in Fertility. The Toll of War: The Economic and Social Consequences of the Conflict in Syria. The European Refugee Crisis and Syria Explained. The Climate-Change Solution No One Will Talk About - The Atlantic. The equation seems fairly simple: The more the world's population rises, the greater the strain on dwindling resources and the greater the impact on the environment. The solution? Well, that's a little trickier to talk about. Public-health discussions will regularly include mentions of voluntary family planning as a way to reduce unwanted pregnancies and births.

Is this real life? - In The Know: Wanderlust. StreetArtGlobe - If 100 people lived on earth... Subscribe... Comments. Life expectancy three years longer for children born into smaller families. Children born into smaller families in the world's poorest nations will live an expected three years longer than those born into larger families, new Johns Hopkins Bloomberg School of Public Health research suggests. The findings, being presented at the International Conference on Family Planning in Nusa Dua, Indonesia, show that while family planning programs have sometimes been pitched as ways to moderate population growth and minimize pressure on resource-strapped nations, they have real health impacts on individuals.

"For 40 years, the slogan 'a small family is a happy family' has been used to promote contraceptive use in developing countries," says study leader Saifuddin Ahmed, MBBS, PhD, an associate professor with the Bloomberg School's Department of Population, Family and Reproductive Health and Bill & Melinda Gates Institute for Family and Reproductive Health. Cookies are Not Accepted - New York Times. Imagining tomorrow’s population - Population games. Jelly babies game original instructions. GCSE Demographic Transition Model. The Demographic Transition Model graphs Birth rate, Death rate and Natural Increase. The word demographic simply means population, and transition relates to change. Therefore this model proposes what should happen to a population over time and how it should CHANGE. If birth rate is greater than death rate the population will increase.

South Korean women will be the first in the world to have an average life expectancy above 90, a study suggests. Why does a Nigerian Muslim leader want to restrict polygamy? Image copyright AFP. A Real-Time Map of Births and Deaths - The Atlantic. In 1950, there were 2.5 billion humans. Today there are just over 7 billion. In another 30 years, according to U.S. Untry File: Mapping rural-to-urban migration.