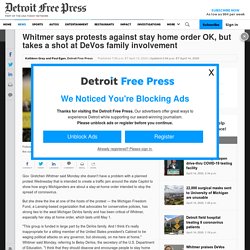 Detroit Free Press Gov. Gretchen Whitmer said Monday she doesn't have a problem with a planned protest Wednesday that is intended to create a traffic jam around the state Capitol to show how angry Michiganders are about a stay-at-home order intended to stop the spread of coronavirus. But she drew the line at one of the hosts of the protest — the Michigan Freedom Fund, a Lansing-based organization that advocates for conservative policies, has strong ties to the west Michigan DeVos family and has been critical of Whitmer, especially her stay at home order, which lasts until May 1. "This group is funded in large part by the DeVos family. 4/15/20: DeVos Group, Right-Wing Fringe Org Threaten Public Health. 4/17/20: The rightwing groups behind wave of protests against Covid-19 restrictions. A wave of planned anti-lockdown demonstrations that have broken out around the country to protest against the efforts of state governments to combat the coronavirus pandemic with business closures and stay-at-home orders have included far-right groups as well as more mainstream Republicans. 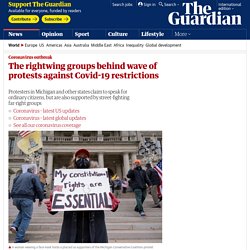 While protesters in Michigan, Ohio, Kentucky and other states claim to speak for ordinary citizens, many are also supported by street-fighting rightwing groups like the Proud Boys, conservative armed militia groups, religious fundamentalists, anti-vaccination groups and other elements of the radical right. On Wednesday in Lansing, Michigan, a protest put together by two Republican-connected not-for-profits was explicitly devised to cause gridlock in the city, and for a time blocked the entrance to a local hospital. It was organized by the Michigan Conservative Coalition, which Michigan state corporate filings show has also operated under the name of Michigan Trump Republicans. 4/19/20: The 4/20 Pennsylvania Pandemic Putsch: Who's Behind Tomorrow's H'Burg Rally. Yeah, it’s Pennsylvania’s turn to get one of these rallies put on by the Branch Covidians. 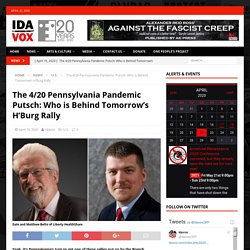 But the people behind it aren’t some people pissed off because their business is failing. This is their business! HARRISBURG, PA — On various Pennsylvania talk radio shows days before the April 20th Capitol grounds demonstration against the state’s COVID-19 social and business restrictions to inhibit the spread of the virus, the public face of the demonstration effort worked the illusion that it was a rather genuine organic effort. That however might be debatable. A key player is Matthew Bellis of Strasburg, PA. Based out of Ohio, LHS was created in conjunction with a Mennonite religiously-oriented corporation when President Obama’s American Care Act allowed religious organizations to offer corporation-organized “health share” services while avoiding a state’s insurance regulatory scheme. 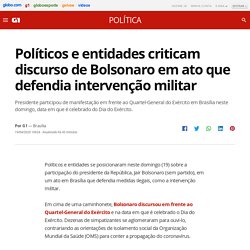 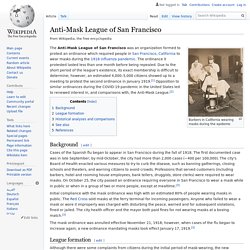 The ordinance it protested lasted less than one month before being repealed. Due to the short period of the league's existence, its exact membership is difficult to determine; however, an estimated 4,000–5,000 citizens showed up to a meeting to protest the second ordinance in January 1919.[1] Opposition to similar ordinances during the COVID-19 pandemic in the United States led to renewed interest in, and comparisons with, the Anti-Mask League.[2] Background[edit] Cases of the Spanish flu began to appear in San Francisco during the fall of 1918. Initial compliance with the mask ordinance was high with an estimated 80% of people wearing masks in public.