Demanding End to Social Distancing. How Are Americans Adjusting To Life In A Pandemic? By: Nathaniel Rakich | FiveThirtyEight When asked when they think it will be safe to end social distancing measures and reopen businesses, 6 percent of respondents told The Economist/YouGov right now, and 8 percent said in about two weeks — meaning about 14 percent agree with Trump’s timeline to reopen much of the country around May 1. 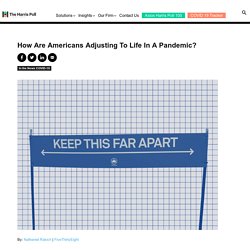 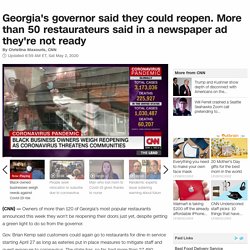 Brian Kemp said customers could again go to restaurants for dine-in service starting April 27 as long as eateries put in place measures to mitigate staff and guest exposure to coronavirus. The state has, so far, had more than 27,490 infections and at least 1,169 deaths, according to Johns Hopkins University. In a full-page advertisement in a local newspaper, more than 50 restaurateurs said they would hunker down a little longer. 5/2/02: Cellphone data shows more Americans leaving homes, despite orders. State leaders are considering reopening economies and allowing people to leave their homes, but more and more Americans appear to be doing so on their own. 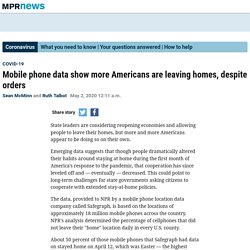 Emerging data suggests that though people dramatically altered their habits around staying at home during the first month of America's response to the pandemic, that cooperation has since leveled off and — eventually — decreased. This could point to long-term challenges for state governments asking citizens to cooperate with extended stay-at-home policies. The data, provided to NPR by a mobile phone location data company called Safegraph, is based on the locations of approximately 18 million mobile phones across the country. NPR's analysis determined the percentage of cellphones that did not leave their "home" location daily in every U.S. county.

About 50 percent of those mobile phones that Safegraph had data on stayed home on April 12, which was Easter — the highest point in the data. Sharp dropoffs "Enforcement for that is difficult. In Coronavirus Quarantine? Tell Us What Authorities Told You So We Can Make Sure It’s Right. Americans are getting mixed messages on what to do if they have been exposed to coronavirus. 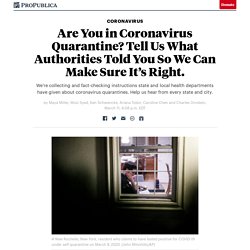 ProPublica is collecting and fact-checking the instructions you receive from your state and local health departments, as well as any other advice you receive. If you’ve been in touch with your local authorities, please let us know what they said by passing along any documentation. If you plan to call your local authorities, we hope you’ll document what you hear and share it with us. We’ll report back on what we learn. A note about our commitment to your privacy: We appreciate you sharing your story and we take your privacy seriously. If you have a tip or lead unrelated to quarantine, please fill out this form here.

4/20/20: Israelis hold 'socially distant' protest against Netanyahu. 4/15/20: Christina Koch - Coming Back to Earth After 11 Months. 4/16/20: Sweden’s coronavirus strategy is risky and could backfire. As most governments around the world impose strict social distancing measures to try to stop the spread of the coronavirus, Sweden has tried something quite different — and it’s unclear if it’ll prove successful or lead to more deaths. 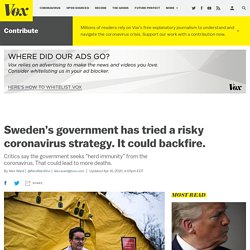 For months, the Scandinavian nation allowed large gatherings to form, schools for younger children to remain open, restaurants to serve late-night guests, and resorts to welcome thrill-seeking skiers. Although some restrictions were in place and many people observed general safety and social distancing measures, Swedish health authorities felt it was better to have much of the country operating somewhat normally instead of shutting it all down. 4/3/20: Google location data shows which places are complying with stay-at-home orders. Google is using location data gathered from smartphones to help public health officials understand how people’s movements have changed in response to the global COVID-19 pandemic. 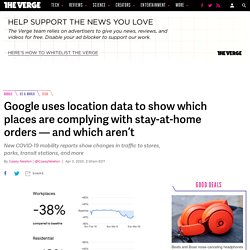 In a blog post early Friday morning, Google announced the release of its COVID-19 Community Mobility Reports. When the Motor Stops -Detroit public message. 3/26/20: California DMV to close all field offices to public door to Covid-19. Faced with concerns among workers about the spread of COVID-19, the California Department of Motor Vehicles announced in a memo to employees Thursday that it is closing all of its more than 170 field offices to the public starting Friday. 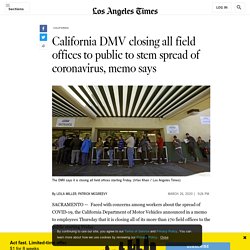 In the memo obtained by The Times that was sent to employees on Thursday, DMV Field Operations Deputy Director Coleen Solomon wrote that the closures are part of the agency “taking steps to address employee health and safety concerns, including public contact and increasing social distancing between individuals.” Employees will be placed on paid administrative time off as the offices are closed for cleaning and disinfecting from March 27 to 31, and staff will return to work April 1 though the offices will remain closed to the public.

When employees return to work on April 1, they will receive training to process online transactions, the memo said. “I feel that’s a great choice,” she said. The action comes just hours after the U.S. 3/26/29: Asymptomatic Carriers Fueling the COVID-19 Pandemic. Here’s Why You Don’t Have to Feel Sick to Spread the Disease. This week, the White House issued a warning for anyone who recently fled New York City: Quarantine yourself for a full 14 days or risk spreading COVID-19 to a new community — regardless of whether you’re showing symptoms. 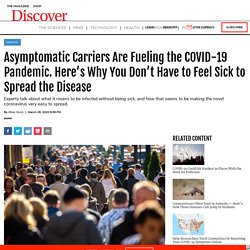 “To everyone who has left New York over the last few days, because of the … number of cases [there], you may have been exposed,” said Deborah Birx, the response coordinator for the White House coronavirus task force, in a news conference on Tuesday. Officials say new cases of the disease popping up in Long Island suggest fleeing New Yorkers were unknowingly spreading SARS-CoV2 — the coronavirus strain responsible for COVID-19. New York City is now at the epicenter of the outbreak in the U.S., with more than 21,000 confirmed cases as of Thursday morning. Anyone who was in the city recently could easily have been exposed without realizing it. This is true across the world, and is part of what has made stopping the pandemic’s spread so challenging.

Infected and Feeling Fine. 3/11/20: Chart of the 1918 Spanish flu shows why social distancing works. In 1918, the city of Philadelphia threw a parade that killed thousands of people. 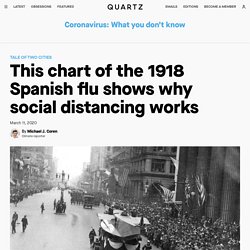 Ignoring warnings of influenza among soldiers preparing for World War I, the march to support the war effort drew 200,000 people who crammed together to watch the procession. Three days later, every bed in Philadelphia’s 31 hospitals was filled with sick and dying patients, infected by the Spanish flu. By the end of the week, more than 4,500 were dead in an outbreak that would claim as many as 100 million people worldwide. By the time Philadelphia’s politicians closed down the city, it was too late. A different story played out in St. 2/21/20: Wuhan quarantine bought the world time to prepare for Covid-19. Could cause panic.” 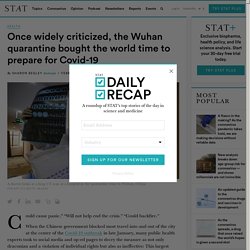 “Will not help end the crisis.” “Could backfire.” When the Chinese government blocked most travel into and out of the city at the center of the Covid-19 outbreak in late January, many public health experts took to social media and op-ed pages to decry the measure as not only draconian and a violation of individual rights but also as ineffective: This largest quarantine in history — the city, Wuhan, has a population of 11 million, and the lockdown has been expanded — would have little effect on the course of the epidemic, they argued. As the U.S. and other countries imposed travel restrictions, even the World Health Organization questioned whether they were a good idea. But early evidence is causing some disease fighters to reconsider. advertisement The last few days have seen a perceptible flattening in growth of Covid-19 cases in China, raising hopes that the epidemic has peaked.

As of Thursday, there were 12,644 Covid-19 cases in China outside Hubei. 2/28/20: Reasons to Be Skeptical of the Efficacy of Quarantine. Coronavirus is coming. Maybe not for you, but certainly for the U.S. The country’s first case of unexplained origin has been identified in California, and Americans need to prepare, according to the Centers for Disease Control and Prevention. That it has arrived also means that the virus slipped past China’s efforts to contain it — which included some of the most extreme quarantines in modern history. And that comes as no surprise to public health experts. “There are reasons to be skeptical of the efficacy of quarantine, for respiratory diseases [like coronavirus] in particular,” said Wendy Parmet, director of the Center for Health Policy and Law at Northeastern University Law School. The first quarantines date at least as far back as the 14th century, when the Croatian city of Dubrovnik began isolating travelers and merchants — even apparently healthy ones — in a special area outside the city and away from all contact with locals.