35 Cool Building Facades Featuring Unconventional Design Strategies. Gallery - Lima Duva Resort / IDIN Architects - 3. How to form board form concrete. Without sounding like a broken record–or iPod–we have a lot of board formed concrete in our project. 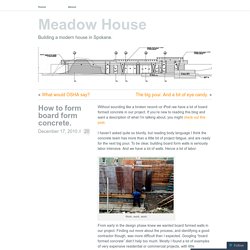 If you’re new to reading this blog and want a description of what I’m talking about, you might check out this post. I haven’t asked quite so bluntly, but reading body language I think the concrete team has more than a little bit of project fatigue, and are ready for the next big pour. To be clear, building board form walls is seriously labor intensive. OK — The Pierre. Tadao Ando. Tadao Ando has unveiled his first New York building. 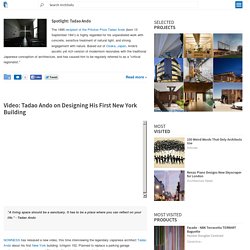 Concrete intentions-Tadao Ando : Inside Outside Magazine. Ando’s work could not be more traditionally Japanese in its air of reserve, and it could not be more like contemporary Japan in its commitment to modernity, in his celebrated, austere, brooding, powerful and spiritually ennobling buildings. 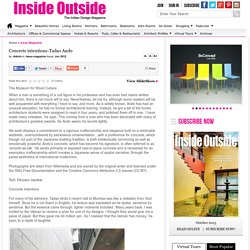 The New York Times quipped: ‘Mr Ando’s work looks like the morning after. It puts us on a strict aesthetic diet of geometric forms that come in every shade of gray.’ Ando has explained that the quality of construction does not depend on the mix itself, but rather on the form work into which the concrete is cast. Because of the tradition of wooden architecture in Japan, the craft level of carpentry is very high. Wooden form work, where not a single drop of water will escape from the seams of the forms depends on this.

Board Formed Concrete. By a show of hands, who doesn’t like board-formed concrete? 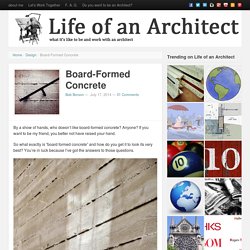 Anyone? If you want to be my friend, you better not have raised your hand. So what exactly is “board formed concrete” and how do you get it to look its very best? You’re in luck because I’ve got the answers to those questions. The picture above is from one of my projects and is a close up shot of the texture you get with board-formed concrete. OK — The Pierre. 9 Architectural Photography Tips. Classical or contemporary; architectural photography can be as challenging as it is rewarding. 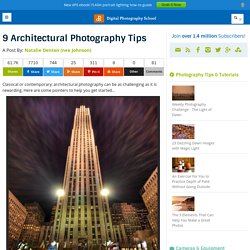 Here are some pointers to help you get started… Ice Skating at Rockefeller Center – by Stuck in Customs 1. Be sensitive to the direction of light as this can increase contrast, shadows, textures and reflections. High levels of contrast can fool cameras into exposing the scene incorrectly, but shooters can easily overcome this by applying exposure compensation. PrintGallery24. 50m2 House / OBBA. Architects Location Partners in Charge Sojung Lee, Sangjoon Kwak Area 50.0 sqm Project Year 2015 Photographs Design Team Jaeho Kim, Daae Kim, Hojae Lee, Sojae Ahn Construction TCM Global From the architect. 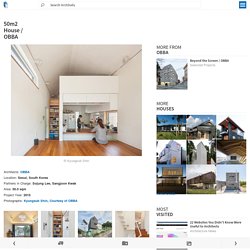 According to the Seoul Institute’s 2015 census data, the average floor area of a newlywed’s home is 72.7m2, and 44.6% of newlyweds live in an apartment building and/or multipurpose commercial/residential building typology. FLUSH PULLS. The New Taiwan: Richard Meier’s Monument to Modernism Stands in Contrast to Taipei’s PoMo Past. 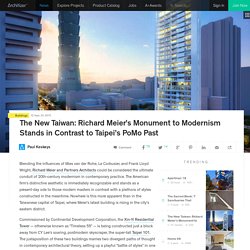 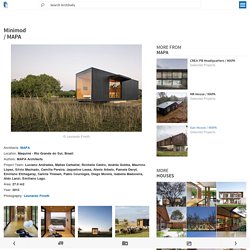 Área: 27.0 m2 Year: 2013 Photography: Leonardo Finotti From the architect. The Sacred Block: 7 Sanctuaries That Channel the Power of Simplicity. Architecture and faith are intimately intertwined. 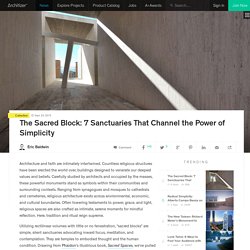 Countless religious structures have been erected the world over, buildings designed to venerate our deepest values and beliefs. Carefully studied by architects and occupied by the masses, these powerful monuments stand as symbols within their communities and surrounding contexts. Barak House / Pitsou Kedem Architects. Schmidt Hammer Lassen Wins Competition to Design Danish Theater. A team led by Schmidt Hammer Lassen Architects has been announced as winners of a competition to design the Vendsyssel Theatre and Experience Centre in Hjørring, Denmark. 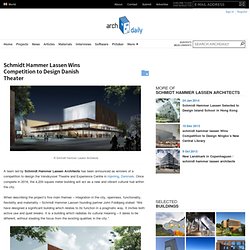 Once complete in 2016, the 4,200 square meter building will act as a new and vibrant cultural hub within the city. When describing the project’s five main themes – integration in the city, openness, functionality, flexibility and materiality – Schmidt Hammer Lassen founding partner John Foldbjerg stated: “We have designed a significant building which relates to its function in a pragmatic way. It invites both active use and quiet breaks. It is a building which radiates its cultural meaning – it dares to be different, without stealing the focus from the existing qualities in the city.” “The Theatre and Experience Centre consists of a complex of buildings – a city within the city. Inside, boundaries between public and private spaces are blurred. Rethinking the American Lake House: 7 Bold New Designs. The American lake house is getting an overhaul.

These traditionally quiet, simple cabins and abodes are being rethought across the United States, a typology experiencing national rebirth. Honoring vernacular craft and local building traditions, new projects are also exploring a contemporary architectural language for the rural retreat. These are projects that inherently celebrate the outdoors, whether created for vacationers or permanent residents alike. Skyline House. Bjarke Ingels Group. BIG Architects Unveil Giant TED Cube Building In Taiwan TED is a public building in Taiwan that uses a form and highly mixed program to encourage a large cross section of users. Designed by BIG Architects (Bjarke Ingels Group), the 57 meter cubed building has an open section, or ‘street’ to allow full public access through the building.

Read the rest of this article » BIG Wins Competition For The World Village Of Women Sports In Malmø. Fast-uk > Projects > PBB > NIO. NIO Architecten - Watermark Watermark is a series of mock-ups of façade panels for a cluster of buildings with divergent functions; a music hall, a national soccer museum, a fast food restaurant, a school, a wellness centre and several outdoor activity shops for Middelburg, a Dutch city close to the sea. The panels are embodiments of moods that relate to leisure, crossed with various different characteristics of water: desire-whirl, arousal-cohesion, thrill-humidity, satisfaction-drop, curiosity-drifting, relaxation-rain, joy-floating, excitement-boiling, welcoming-wave and anticipation-ripple.

The large amount of natural daylight illumination in this contemporary wooden interior design gives the energy saving contemporary interior design. My favorite part is the combination between wood material and glass interior material. The combination symbolizes the harmonious relationship between the traditional interior construction element and the contemporary interior construction element. Modern-wooden-house-photos-3. The Wall House / FARM. Inspiration from the philosophy of classical Chinese Garden, The Wall House was designed for the retired parents and one of their children. Skyscrapers - The Surprisingly Ancient History  Lovely Luxury Wooden House Design Plans Villa Foto. House Maza / CHK arquitectura. Dive In: Exploring The Allure Of The Swimming Pool. The home swimming pool—that enduring icon of the southern California landscape—has come to signify an oasis of leisure and a sense of well-deserved accomplishment in the American popular imagination. Pretty Staircase Ideas For Small Spaces.