ARCHITECTURE- HISTORY AND MORE FOR STUDENTS AND TEACHERS

Walter Gropius. UPDATE: In honor of the 81st anniversary of the day the Bauhaus closed in 1933, we’re re-publishing this popular infographic, which was originally published April 16th, 2012. 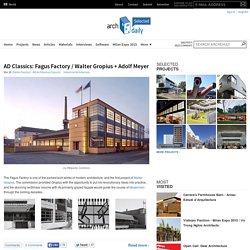 From the “starchitect” to “architecture for the 99%,” we are witnessing a shift of focus in the field of architecture. However, it’s in the education system where these ideas really take root and grow. This sea change inspired us to explore past movements, influenced by economic shifts, war and the introduction of new technologies, and take a closer look at the bauhaus movement. 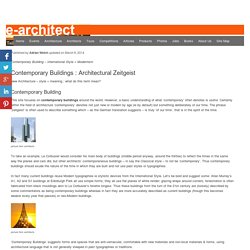 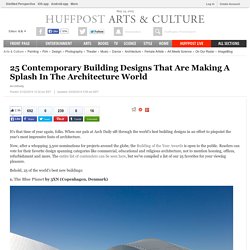 When our pals at Arch Daily sift through the world's best building designs in an effort to pinpoint the year's most impressive feats of architecture. Now, after a whopping 3,500 nominations for projects around the globe, the Building of the Year Awards is open to the public. Readers can vote for their favorite design spanning categories like commercial, educational and religious architecture, not to mention housing, offices, refurbishment and more. 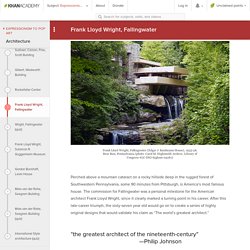 Kaufmann House), 1935-38, Bear Run, Pennsylvania (photo: Carol M. Highsmith Archive, Library of Congress #LC-DIG-highsm-04261)Perched above a mountain cataract on a rocky hillside deep in the rugged forest of Southwestern Pennsylvania, some 90 minutes from Pittsburgh, is America’s most famous house. The commission for Fallingwater was a personal milestone for the American architect Frank Lloyd Wright, since it clearly marked a turning point in his career. After this late-career triumph, the sixty-seven year old would go on to create a series of highly original designs that would validate his claim as “The world’s greatest architect.” Frank Lloyd Wright - Fallingwater, house over waterfall. What is Fallingwater? Why is it so famous? 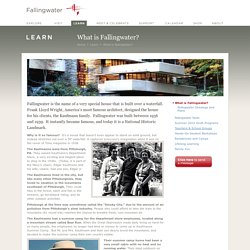 It's a house that doesn’t even appear to stand on solid ground, but instead stretches out over a 30’ waterfall. It captured everyone’s imagination when it was on the cover of Time magazine in 1938. The Kaufmanns were from Pittsburgh, PA. They owned Kaufmann’s Department Store, a very exciting and elegant place to shop in the 1930s. Wright on the Web. Museo di Orsay - Gae Aulenti. Gae Aulenti obituary. Gae Aulenti, the Italian architect of the Musée d'Orsay in Paris and a prolific designer of furniture, lighting and theatre sets, has died aged 84. 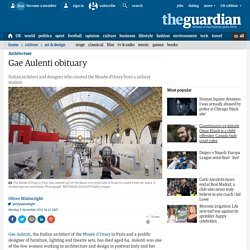 Aulenti was one of the few women working in architecture and design in postwar Italy and her talents found a vast range of outlets, from showrooms for Fiat and Olivetti to sets for La Scala, the opera house in Milan, to private villas for the rich. But it is for her work in museums and exhibition design that she was best known – and for her largest project, which also proved to be her most divisive. She was chosen in 1981 to convert the Beaux Arts-style Gare d'Orsay railway station in Paris into a new home for impressionist art. 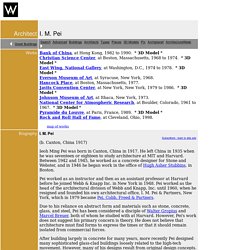 M. Pei (b. The chinese-born american architect ieoh ming pei. I.m.pei the chinese-born american architect ieoh ming pei is one of the most prolific architects of our times, an architect who has incorporated both eastern and western ideas into his designs. his buildings are a testament to how the convergence of two great traditions, the asian and the european, can create new aesthetic standards. in these month the world is looking at the state of the works of the german historical museum in berlin, here is the link to the museums webcam biography ieoh ming pei was born in april 26th, 1917 in canton, china, son of a prominent banker. his grandfather gave him several advices as 'wherever you go, go with your hart' and 'if one day you are doing important things, always do them by means of virtue and you will be like the north star, which keeps its place while all other stars turn towards it.' pei emigrated to the us at 17 to study architecture at m.i.t. 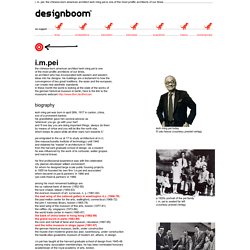 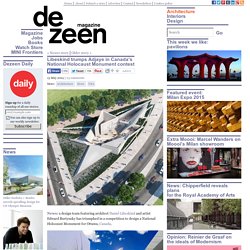 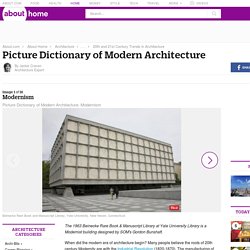 When did the modern era of architecture begin? Many people believe the roots of 20th century Modernity are with the Industrial Revolution (1820-1870). The manufacturing of new building materials, the invention of new construction methods, and the growth of cities inspired an architecture that became known as Modern. In 1896, the same year American architect Louis Sullivan gave us his form follows function essay, the Viennese architect Otto Wagner wrote Moderne Architektur—an instruction manual of sorts, A Guidebook for His Students to This Field of Art: Yet the word comes from the Latin modo, meaning "just now," which makes us wonder if every generation has a modern movement.

"The more rigorously one searches for the origin of modernity...the further back it seems to lie. International Style of Modern Architecture: Origins, Characteristics. Richard Neutra. The Institute for Sacred Architecture. By Michael S. Rose, appearing in Volume 4 - Download Issue PDF All the great cathedrals have taken centuries to complete. Barcelona Gaudí: Barcelona Architecture. On this page you'll find an introduction to Barcelona Gaudí Architecture and find out why his work is so important in Barcelona. Gaudí's work is admired by architects around the World as being one of the most unique and distinctive architectural styles.

The Bauhaus Building by Walter Gropius (1925-26) : School Building : Stiftung Bauhaus Dessau / Bauhaus Dessau Foundation. The Bauhaus originated in Weimar in 1919 as a new type of design school. In 1924, when further work in Weimar became impossible, the Bauhaus offered itself up to other towns. ARTS &#38 ARCHITECTURE. Germania Nazi Architecture Berlin.

Mussolini Monumental Buildings. Published: April 2009 By Michael Z. Wise Inside the high-ceilinged chambers that were built as Benito Mussolini's personal gymnasium, the marble walls glisten as they did when Il Duce flexed his muscles, lifted weights, and swam in the colonnaded pool. Half a century after the Fascist leader was deposed, all of the oversized doors are still marked with a mammoth M. "The quality of this space is incredible," says Francesco Dal Co, editor of Italy's leading architectural journal, Casabella. Favorite Architect - Santiago Calatrava's Works on Pinterest. Bauhaus Architecture and Walter Gropius. YouTube. London: St. Paul's Cathedral. Hadrian's Wall - Caledonians, Picts and Romans. Pier Luigi Nervi on Pinterest. Picture Dictionary of Modern Architecture - International Style.

Where can I find Art Nouveau-Jugendstil buildings? I have heard of Art Nouveau buildings and art on all 6 continents but most of them are in Europe and in a smaller part in the United States. In Europe, some countries were literally covered by such architecture : in Belgium, every medium to large town has its Art Nouveau buildings and rather comprehensive architecture guides have been published. Germany seems to had as much Art Nouveau as Belgium but I have found less information or studies about it and it has been much more destroyed during WW2.