Astrobiology Magazine Exploring the Solar System and beyond 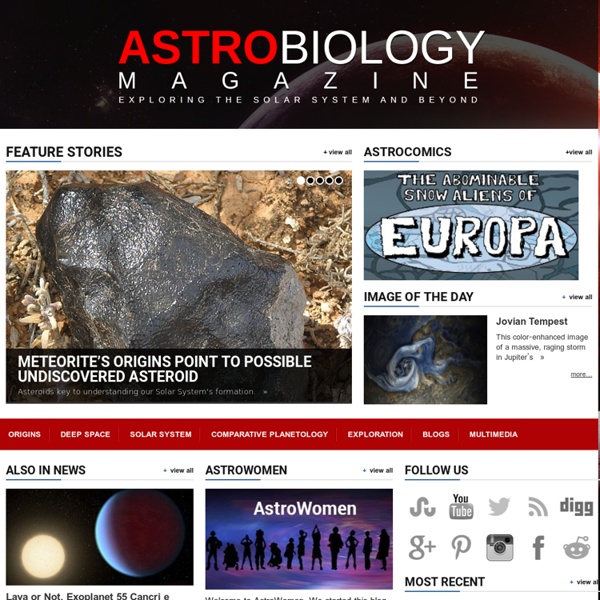 The Stanford Astrobiology Course Welcome and introduction to website Astrobiology is at once one of the newest of scientific meta-disciplines, while at the same time encompassing some of our oldest and most profound questions. Beyond strictly utilitarian concerns, such as “what is for dinner?” and leaving offspring, asking the three great questions of astrobiology seems to be embedded in what it means to be human. While these questions are ancient questions, we now have the technological tools to grapple with them at a whole new scientific level.

Pond Scum Explains Evolution Of First Animals - Astrobiology Magazine Dickinsonia costata, one of the most common species of the Ediacaran period, moved and fed on seafloor microbe mats. This specimen and its silly putty cast are about 6 centimeters across and from the Nilpena Station of South Australia. Image credit: Mary Droser. Microbial mats that existed on sea floors prior to the “Cambrian explosion” provided the foundation for early animal life to arise, new research looking at trace fossils of that early life has found. When Charles Darwin wrote On the Origin of Species and for decades thereafter, scientists ascribed the beginning of animal life to the Cambrian, eventually pinned to about 540 million years ago when trilobites and other multicellular organisms emerged in a relatively short timeframe. In recent years, however, astonishing complexity has been discovered in the period right before the advent of the Cambrian explosion, revising the scientific view of the origins of the most complex, multicellular life on Earth.

Astrobiology Center The Columbia Astrobiology Center (NYC-Astrobiology Consortium) The Columbia Astrobiology* Center represents a unique consortium of Columbia University departments, the Goddard Institute for Space Studies (NASA), and the American Museum of Natural History. It is an interdisciplinary effort dedicated to investigating the wide range of phenomena that may participate in the origin and evolution of life on Earth and beyond. We undertake fundamental research in many areas, including: The study and modeling of exoplanets, their characteristics and climates. The study of planet formation and solar system meteoritics and early chemistry.The study of Earth and Martian paleoclimate. The potential habitability of moons around giant planets.

Hubble data predicts Milky Way galactic collision When Galaxies Collide! It sounds like an early science fiction novel. However, analysis of Hubble measurements shows that our own Milky Way galaxy is moving toward a head-on collision with our nearest neighbor, the Andromeda galaxy (also known as M31). The collision will start in about four billion years, and over the following three billion years the two spiral galaxies will coalesce into a large elliptical galaxy. Based on this data, NASA has produced a video of the upcoming collision. Self-replicating spacecraft The idea of self-replicating spacecraft has been applied — in theory — to several distinct "tasks". The particular variant of this idea applied to the idea of space exploration is known as a von Neumann probe. Other variants include the Berserker and an automated terraforming seeder ship. Theory[edit] In theory, a self-replicating spacecraft could be sent to a neighbouring star-system, where it would seek out raw materials (extracted from asteroids, moons, gas giants, etc.) to create replicas of itself. These replicas would then be sent out to other star systems.

A Piece of Mars is Going Home - Astrobiology Magazine Rohit Bhartia of NASA’s Mars 2020 mission holds a slice of a meteorite scientists have determined came from Mars. One of two slices will be used for testing a laser instrument for NASA’s Mars 2020 rover while it’s still on Earth; the other slice will go to Mars onboard the rover. Image Credit: NASA/JPL-Caltech Seth MacFarlane Champions New ‘Cosmos’ Series on Fox Photo WASHINGTON — When some of the nation’s brightest minds gathered here at the Library of Congress to celebrate Carl Sagan, the pioneering astrobiologist, the first guest speaker was someone with no professional background in science. It was Seth MacFarlane, the multitasking comedian and creator of “Family Guy,” who gave an impassioned speech to the crowd of Ph.D.s and NASA advisers on how scientific achievement had “ceased in many parts of this country to be a source of pride.”

Hubble Wallpaper Videos See the universe come to life via animations, scientific visualizations, expert commentary, and more. Noogenesis Noogenesis (Ancient Greek: νοῦς=mind + γένεσις=becoming) is the emergence of intelligent forms of life. The term was first used by Pierre Teilhard de Chardin in regard to the evolution of humans. It also used in astrobiology in regard to the emergence of forms of life capable of technology and so interstellar communication and travel. Teilhard[edit] Noogenesis began with reflective thought; or with the first human beings.