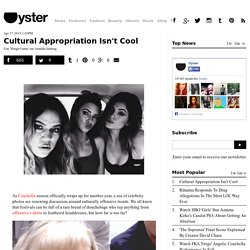 We all know that festivals can be full of a rare bread of douchebags who rep anything from offensive t-shirts to feathered headdresses, but how far is too far? In the past year Glastonbury has restricted the sale of Native American headdresses, and Australian festival Meredith furthered its "no dickheads" policy by banning them altogether. This calls two more trends into question: cornrows and bindis. Sixteen-year-old Hunger Games star Amandla Stenberg, who played Rue (R.I.P. Rue, long live Rue) has summed up the problem of cultural appropriation perfectly in a video she made for history class. "Appropriation occurs when a style leads to racist generalisations or stereotypes where it originated, but is deemed as high fashion, cool or funny when the privileged take it for themselves," says Amandla. Photo: @khloekardashian Lucy Jones. Ashby (2015) The Road Within - Official Trailer (2015) Zoë Kravitz, Dev Patel Movie. Latest New York City Casting Calls, Entertainment News.

‘The Walking Dead’ Creator Reveals Which Character He Will Never Kill Off Robert Kirkman has revealed in the past that every actor on set of The Walking Dead is not safe from getting killed off at any moment. 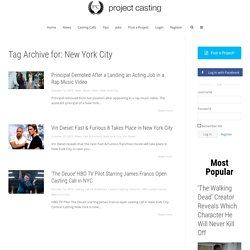 Kangaroos can't jump backwards. , kanyewestniall: #I HATE WHITE BOYS I NEED 10... If Only More People Acted This Way The World Would Be A Much Better Place. This Jaw Dropping Music Video Captures Our Tiny Planet From a Quadrotor. Earlier this week I shared Jonas Ginter’s fantastic work with tiny planets in motion. 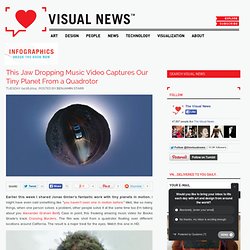 I might have even said something like “you haven’t seen one in motion before.” Well, like so many things, when one person solves a problem, other people solve it at the same time too (I’m talking about you Alexander Graham Bell!). Case in point, this freaking amazing music video for Booka Shade’s track Crossing Borders. The film was shot from a quadrotor floating over different locations around California. The result is a major treat for the eyes. The film was produced in a collaboration between director Ryan Staake’s Pomp&Clout, Pier Pictures and the aerial maneuvers of Octofilms. Known in some circles as the most amazing man in the universe, he once saved an entire family of muskrats from a sinking, fire engulfed steamboat while recovering from two broken arms relating to a botched no-chute wingsuit landing in North Korea. Dead Poets Society (1989) Original Trailer. 3D Panorama. Manhattan in Motion.

100 Documentaries To Expand Your Consciousness. Free your mind & expand your awareness. Here is a list of over 100 documentaries you can watch for free online. They are about Science, Consciousness, ETs, you name it. It’s a smorgasbord of fascinating subjects to learn about. “If you find a video wrongly linked please let us know and we will find another to replace it. The Links that have a line through them are dead and we haven’t managed to find a replacement link yet. 1. This list will never be complete! The Greatest Speech Ever Made.