Why we need to listen to the real experts in science. If we want to use scientific thinking to solve problems, we need people to appreciate evidence and heed expert advice. 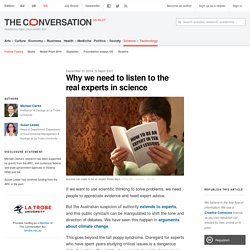 But the Australian suspicion of authority extends to experts, and this public cynicism can be manipulated to shift the tone and direction of debates. We have seen this happen in arguments about climate change. This goes beyond the tall poppy syndrome. Disregard for experts who have spent years studying critical issues is a dangerous default position. The ability of our society to make decisions in the public interest is handicapped when evidence and thoughtfully presented arguments are ignored. So why is science not used more effectively to address critical questions? 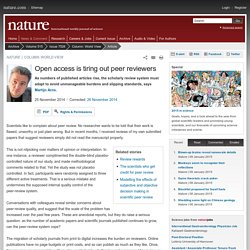 No researcher wants to be told that their work is flawed, unworthy or just plain wrong. But in recent months, I received reviews of my own submitted papers that suggest reviewers simply did not read the manuscript properly. This is not nitpicking over matters of opinion or interpretation. In one instance, a reviewer complimented the double-blind placebo-controlled nature of our study, and made methodological comments related to that. Yet the study was not placebo controlled. Conversations with colleagues reveal similar concerns about peer-review quality, and suggest that the scale of the problem has increased over the past few years.

Ya'll gon learn today, It seems people like it when highly sciencey... Ray Bradbury Sci-Fi Predictions Fulfilled - Infographic. Word of the Day. 60 Great Articles about Science and Technology. The best science and tech writing from around the internet The Body Sorry, But Your Soul Just Died "Brain imaging was invented for medical diagnosis. 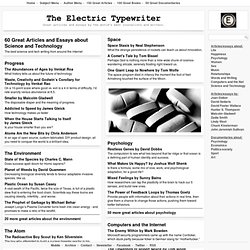 Race and Photography: Racial Photography as Scientific Evidence, 1876-1980, Morris-Reich. EMBL-EBI. Pacific Standard. Telesurgery tests highlight the limits of the Internet. Telesurgery has the potential to bring surgeons in contact with patients anywhere, any time. 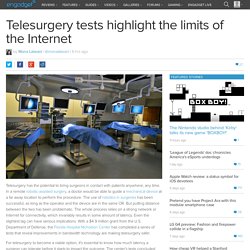 In a remote robotic-assisted surgery, a doctor would be able to guide a mechanical device at a far away location to perform the procedure. The use of robotics in surgeries has been successful, as long as the operator and the device are in the same OR. But putting distance between the two has been problematic. The whole process relies on a strong network or Internet for connectivity, which invariably results in some amount of latency.

Even the slightest lag can have serious implications. Skin-tone-matched hospital gowns make it easy to spot color-shifts. A paper by Mark Changizi in Elsevier's journal Medical Hypotheses cleverly suggests that hospitals issue gowns matched to skin-tone for new patients, so that it's easy to tell if skin-tone has shifted (an urgent warning sign of many urgent health conditions): One potential solution, Changizi said, is for hospitals to outfit patients with gowns and sheets that are nude-colored and closely match their skin tone. 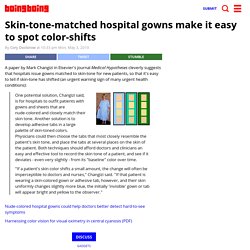 Another solution is to develop adhesive tabs in a large palette of skin-toned colors. Physicians could then choose the tabs that most closely resemble the patient's skin tone, and place the tabs at several places on the skin of the patient. Both techniques should afford doctors and clinicians an easy and effective tool to record the skin tone of a patient, and see if it deviates - even very slightly - from its "baseline" color over time. Disrupting Medical Education - Pacific Standard. Arizona State University’s recent announcement that it is joining with edX, a non-profit open online learning platform founded by founded by M.I.T and Harvard, to offer a full freshman year online for as little as $6,000—payable upon successful completion—has re-kindled significant debate about the structure and cost of a college education. 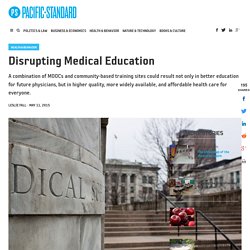 While affordable and open access to an undergraduate education is important to the health of our democracy, why stop there? Training Young Doctors: The Current Crisis by Lara Goitein. Let Me Heal: The Opportunity to Preserve Excellence in American Medicine by Kenneth M. 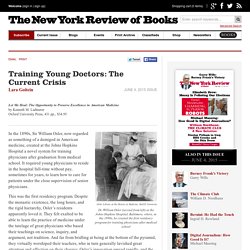 Ludmerer Oxford University Press, 431 pp., $34.95 In the 1890s, Sir William Osler, now regarded as something of a demigod in American medicine, created at the Johns Hopkins Hospital a novel system for training physicians after graduation from medical school. It required young physicians to reside in the hospital full-time without pay, sometimes for years, to learn how to care for patients under the close supervision of senior physicians. Photographer Daniel Stier reveals the bizarre world of scientific research. Daniel Stier’s recent series Ways of Knowing instantly catapults you straight into the world of scientific research. 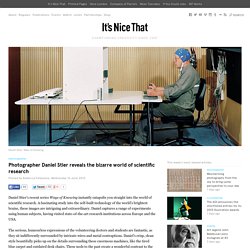 A fascinating study into the self-built technology of the world’s brightest brains, these images are intriguing and extraordinary. Daniel captures a range of experiments using human subjects, having visited state-of-the-art research institutions across Europe and the USA. Consider, for example, the way the advancement of... Colors. Northern Lights: Vintage Color Photos of Nature’s Great Light Show. Hurricane Sandy turned a New York subway station into a petri dish of Antarctic bacteria. On Oct. 29, 2012, Hurricane Sandy sent a tidal surge roaring through Lower Manhattan, pouring millions of gallons of seawater into South Ferry Station. 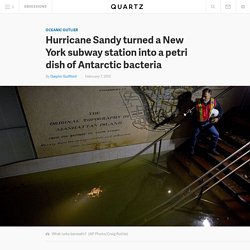 Metro transit authorities who inspected the subway station encountered what they called “a large fish tank.” The spillover from New York Bay had filled the tunnels with water 80 ft. (24 m) deep. Nearly two and a half years later, South Ferry Station has long since been drained. Perfection is a myth, show 50,000 bacterial generations - life - 15 November 2013. When it comes to evolution, there is no such thing as perfection. 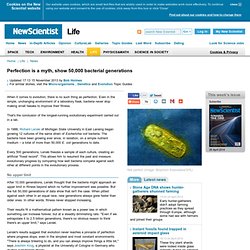 10 Great Articles about the Atom. Blast Shadows. The Most Sublime Read of 1946 The mummy’s nightmare: disintegration of souls, and this is precisely the ultra secret and supersensitive function of the atom bomb: a Soul Killer, to alleviate an escalating soul glut.” —William S. Burroughs, The Western Lands. A man named Doom helped create the first atomic bomb and we spoke to him. We first learned about Mr. Doom thanks to a tweet from nuclear historian Alex Wellerstein, who found a document signed by "L.G. H-Bomb Physicist Ignores Federal Order to Cut 5,000 Words From Memoir.

We’ve crossed four of the nine boundaries supposedly separating us from planetary destruction. In 2009, climate scientists devised a framework to monitor Earth’s vital signs based on nine “planetary boundaries” within which human civilization can continue to thrive. Three of the nine boundaries had already been crossed: There was too much carbon dioxide in the atmosphere, too much nitrogen had been removed from the atmosphere, and biodiversity was declining too quickly. Let’s keep an eye on all of these measures, they said (paywall), to predict when our time here might expire.

This month the same team of researchers—30 individuals from 19 academic institutions, in collaboration with the Stockholm Resilience Centre—published an update saying that a fourth boundary has been crossed, the one about “change in land use,” also known as deforestation. GRIN. 97 Cosmic Facts about Space. The first person to look into space with a telescope was Galileo, nearly 400 years ago.e Because fragrance is dependent on several environmental factors, such as temperature, humidity, and a flower’s age, flowers smell differently in space than they do on Earth.

Pie.jpg (JPEG Image, 790x600 pixels) Kepler Telescope Finds Plethora of Earth-Size Planets. A little more than two decades ago, no planets had ever been detected outside the solar system. Above the Clouds. Interactive graphic: Every active satellite orbiting earth. Bob Dylan, a folk singer whose poetic lyrics defined his generation, has become the first musician to win the nobel prize for literature. The prize, which was first awarded in 1901, was presented to Dylan “for having created new poetic expressions within the great American song tradition,” according to an announcement from the Swedish Academy, which decides the prize each year from an undisclosed list of candidates.

Dylan’s distinctive voice and his musicianship brought him early success. Born in Duluth, Minnesota in 1941, he released his first album in 1962, drawing heavily on traditional folk songs. Soon, though, he began writing his own lyrics, producing distinctive works like Mr Tambourine Man, which Dylan wrote when he was just 22. This surreal timelapse shows what earth looks like from the International Space Station. During his six-month stay on the International Space Station, German astronaut Alexander Gerst took more than 12,500 photos — of the Milky Way, the aurora borealis, the illumination produced by cities at night, and all other sorts of beautiful sights that we can't see well living down here on earth. Sun Sizzles in High-Energy X-Rays. [image-50] For the first time, a mission designed to set its eyes on black holes and other objects far from our solar system has turned its gaze back closer to home, capturing images of our sun.

Revelations from Outer Space by Priyamvada Natarajan. Cosmigraphics: Picturing Space Through Time. Uk.businessinsider. Science & Environment - Timeline of the far future. Syzygy - Word of the Day. Astrobiology. The man who brought us the lithium-ion battery at the age of 57 has an idea for a new one at 92. Watch this cartoon to finally understand quantum computing. The secret history of the vocoder. Characterizing the Evolutionary Path(s) to Early Homo. Molecular Life Sciences — Top 5 misconceptions about evolution: A guide to... Biologists find an evolutionary Facebook for monkeys and apes. Darwin's Children Drew All Over the On The Origin of Species Manuscript (Updated)—Blog—The Appendix.

Dinosaurs May Have Been Tripping on Hallucinogens - Pacific Standard. A global juggling act: feeding the world, saving species. This Desert May Be The Driest Place On Earth, But That Doesn't Mean Life Can't Exist There. Long Before Trees Overtook the Land, Earth Was Covered by Giant Mushrooms. How Climate Change and Plate Tectonics Shaped Human Evolution. Humans Relied on Rainforest Riches 12,000 Years Earlier Than Thought. TH-GH: Hunter-Gatherers Are Not Extinct. TH-GH: The World of Women Who Hunt. Spear points mix up theory of early humans' arrival. A visual compendium of bioluminescent creatures. Eat like a lorikeet : Resources for Bioanthropology Students. Skeletal Collections. Million-Mummy Cemetery Unearthed in Egypt. Ancient Wine Bar? Giant Jugs Of Vino Unearthed In 3,700-Year-Old Cellar : The Salt. Sir Arthur Keith's legacy: re-discovering a lost collection of human fossils.