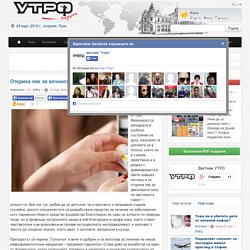 Native Americans have known this trick for thousands of years, but this first aid trick was one I’d personally never heard of, and certainly wouldn’t have ever thought to try. 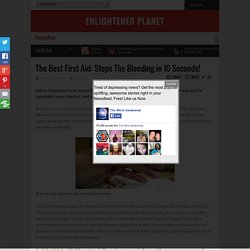 No more physics and maths, Finland to stop teaching individual subjects. Finland, one of the leading educational hotspots in the world, is embarking on one of the most radical overhauls in modern education. 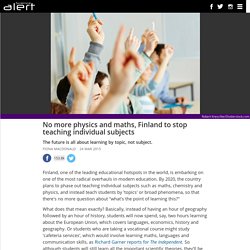 By 2020, the country plans to phase out teaching individual subjects such as maths, chemistry and physics, and instead teach students by 'topics' or broad phenomena, so that there's no more question about "what's the point of learning this? " What does that mean exactly? Basically, instead of having an hour of geography followed by an hour of history, students will now spend, say, two hours learning about the European Union, which covers languages, economics, history and geography.

Or students who are taking a vocational course might study 'cafeteria services', which would involve learning maths, languages and communication skills, as Richard Garner reports for The Independent. So although students will still learn all the important scientific theories, they'll be finding out about them in a more applied way, which actually sounds pretty awesome. 31 Outstanding Quotes From Nikola Tesla. There are many great scientists, but certainly one of the greatest is Nikola Tesla, who is often referred to as “the man who invented the 20th century”. 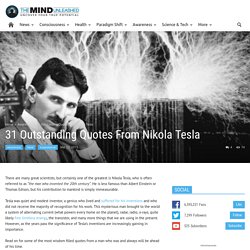 He is less famous than Albert Einstein or Thomas Edison, but his contribution to mankind is simply immeasurable. Tesla was quiet and modest inventor, a genius who lived and suffered for his inventions and who did not receive the majority of recognition for his work. This mysterious man brought to the world a system of alternating current (what powers every home on the planet), radar, radio, x-rays, quite likely free limitless energy, the transistor, and many more things that we are using in the present. Rebel Architecture (2014) A six-part documentary series from Al Jazeera profiling architects who are using design as a form of activism and resistance to tackle the world's urban, environmental and social crises. 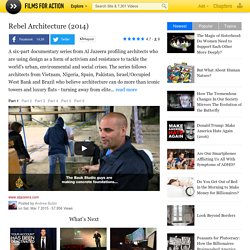 The series follows architects from Vietnam, Nigeria, Spain, Pakistan, Israel/Occupied West Bank and Brazil who believe architecture can do more than iconic towers and luxury flats - turning away from elite "starchitecture" to design for the majority. Part 1 - Guerrilla architect Santiago Cirugeda is a subversive architect from Seville who has dedicated his career to reclaiming urban spaces for the public. Part 2 - A traditional future Pakistani architect Yasmeen Lari uses local building techniques to rebuild villages in the flood-stricken Sindh region. Part 3 - The architecture of violence Eyal Weizman explains architecture's key role in the Israeli occupation of Palestine and the evolution of urban warfare. Part 4 - Greening the city. 50 Rare Photos That Will Destroy Everything You Knew about The Past. These stunning photos reveal relationships and sides of famous people you've never seen before and capture the essence of eras that have come and gone. 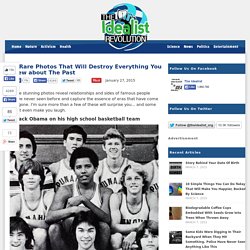 I'm sure more than a few of these will surprise you... and some might even make you laugh. Barack Obama on his high school basketball team Bill Gates' mug shot for driving without a license 1977 Muhammad Ali talking someone out of jumping - 1981. Защо не трябва да пием мляко? Днешният объркан свят в 18 илюстрации на Павел Кучински. Controversial Illustrations By Spanish Artist Mirror The Ugly Side Of Society. Spanish artist Luis Quiles has spent the last few years creating hundreds of powerful drawings, showing a disturbingly accurate vision of our world. 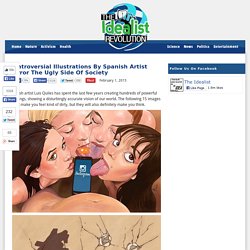 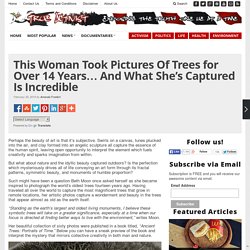 Swirls on a canvas, tunes plucked into the air, and clay formed into an angelic sculpture all capture the essence of the human spirit, leaving open opportunity to interpret the element which fuels creativity and sparks imagination from within. But what about nature and the idyllic beauty captured outdoors? Is the perfection which mysteriously drives all of life conveying an art form through its fractal patterns, symmetric beauty, and monuments of humble proportion? Such might have been a question Beth Moon once asked herself as she became inspired to photograph the world’s oldest trees fourteen years ago. Having traveled all over the world to capture the most magnificent trees that grow in remote locations, her artistic photos capture a wonderment and beauty in the trees that appear almost as old as the earth itself.

Her beautiful collection of sixty photos were published in a book titled, “Ancient Trees: Portraits of Time.” 5 Ways to Get High Without Drugs or Plants. By Kristohper Love| Since the beginning of time, humans have enjoyed getting high. 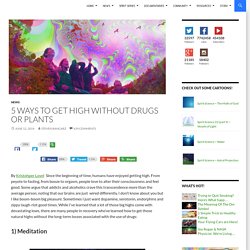 From peyote to fasting, from booze to orgasm, people love to alter their consciousness and feel good. Полякиня създава красиви илюстрации, вдъхновени от литературата и сказанията. Най-голямото откритие в медицината: Този човек излекува 5000 души с конопено масло. A young man asks a homeless man to borrow his bucket, what happens next will burst you into tears - The Mind Awakened. A German student was walking in the street and noticed a homeless man trying to get some money from the pedestrians. 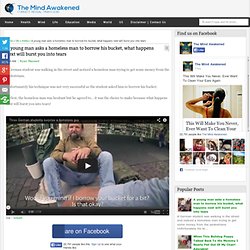 Our world is so full of wonders that new and amazing places are discovered every day, be that by professional photographers or amateurs. Different geographical locations, climatic conditions and even seasons offer the widest variety of natural wonders: pink lakes, stunning lavender or tulip fields, breath-taking canyons and mountains, and other places you can hardly believe actually exist! Some of the pictures in this collection will be of all natural sights you can find while traveling around the world, while the others have experienced human interference – but even in these cases, the result of such collaboration is spectacular.

The Japanese learned how to tame thousands of orchids and form a romantic tunnel out of them; another one was formed all the way in Ukraine by a passing train; and what eventually ends up as hot tea in our mugs, first grows in stunning tree fields in Asia. Feel free to add more places in the comments under the article. Tunnel of Love, Ukraine Image credits: MJiA. 7 Survival Tips That Could Save Your Life. #2 Is Awesome! Have you ever wondered how to filter water, keep away the mosquitos or how to make a solar microwave? These tips might save your life one day. 1. Need some light in a pinch and a candle alone won’t cut it? Rada Om. Anti-surveillance mask enables you to pass as someone else. If you are not comfortable with the surveillance cameras, an identity replacement technology that is basically a Surveillance identity prosthetic provides you a new face. If you find all people around you having the same face like you saw of the agents in Matrix 3, then Leo Selvaggio is the one to thank.

8 Vegetables That You Can Regrow Again And Again. Scallions You can regrow scallions by leaving an inch attached to the roots and place them in a small glass with a little water in a well-lit room. wearenotfoodies.com Garlic When garlic begins to sprout, you can put them in a glass with a little water and grow garlic sprouts. The sprouts have a mild flavor than garlic and can be added to salads, pasta and other dishes. Andy Puddicombe: All it takes is 10 mindful minutes. Sarah Kay: If I should have a daughter ... How to win wars by influencing people's behaviour. When terrorism is staged for YouTube and all sides are media-savvy, the military is turning to the behavioral sciences for help.

At VirtualDali.com - StumbleUpon. Your source of daily updated funny pictures and gifs. - StumbleUpon. This is What Happens When You Give Thousands of Stickers to Thousands of Kids. This December, in a surprisingly simple yet ridiculously amazing installation for the Queensland Gallery of Modern Ar, artist Yayoi Kusama constructed a large domestic environment, painting every wall, chair, table, piano, and household decoration a brilliant white, effectively serving as a giant white canvas. Over the course of two weeks, the museum’s smallest visitors were given thousands upon thousands of colored dot stickers and were invited to collaborate in the transformation of the space, turning the house into a vibrantly mottled explosion of color.

How great is this? Given the opportunity my son could probably cover the entire piano alone in about fifteen minutes.