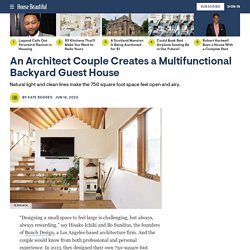 And the couple would know from both professional and personal experience: In 2013, they designed their own 750-square foot ADU—also known as an accessory dwelling unit, a small outbuilding that can function as a home office, extra bedroom, or even a whole guesthouse—in their backyard, kickstarting their design practice that now specializes in ADUs. Ye Rin Mok The duo had already purchased and renovated their 100-year old bungalow in Solano Canyon, “a funny part of Los Angeles right behind Dodger Stadium,” they explain, where all of the houses have “a striped down craftsman aesthetic with lap wood siding, flashes of color, and trim.” 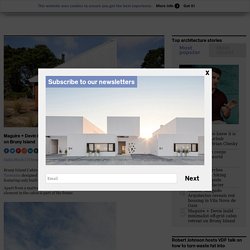 Apart from a mattress and a freestanding low table, every element in the cabin is part of the frame. Maguire + Devin created Bruny Island Cabin for a client who wanted an off-grid retreat on 99 acres of land she owns on the Tasmanian island. "Born in Taiwan, she spent her childhood in traditional Japanese houses," explained the studio. "Out of this grew a love for highly crafted minimalist design. Our brief was to capture that and design a building as a piece of furniture with everything she needs built-in. " The cabin's owner likes to read, play the violin and stargaze, so shelves and outdoor spots were prioritised in the design. Hemaa updates mid-century Sierra Negra house in Mexico City. Mexican architecture studio Hemaa has renovated a dark grey house in Mexico City designed by modernist Mexican architect Augusto H Álvarez in the 1950s. 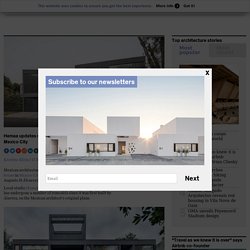 Local studio Hemaa based its renovation of Sierra Negra, which has undergone a number of remodels since it was first built by Álavrez, on the Mexican architect's original plans. "After some research on the property, we were able to trace back to the original documents of the house, designed by the renowned Mexican architect Augusto H Álvarez back in the '50s," said the studio.

"We decided to align our proposal to the base grid plan of this construction, which assembles the distribution of spaces around four structural axes every four meters. " 9 Easy Banana Bread Recipes On TikTok To Make With The Person You Loaf Most. You know that when your bananas start to brown that just means it's time to make some banana bread, and these easy banana bread recipes on TikTok will help you do just that. 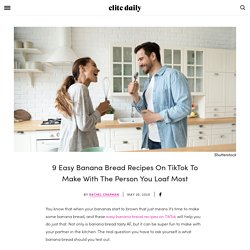 Not only is banana bread tasty AF, but it can be super fun to make with your partner in the kitchen. The real question you have to ask yourself is what banana bread should you test out. Of course, there's the OG loaf that you can't go wrong with. However, when you start adding in additional ingredients like chocolate chips, walnuts, and cinnamon, you open yourself up to a whole new world of banana bread possibilities. Deltastudio converts concrete warehouse into minimalist family home. Architecture practice Deltastudio has turned a former agricultural warehouse in Italy into a house with a balcony framed with white curtains. 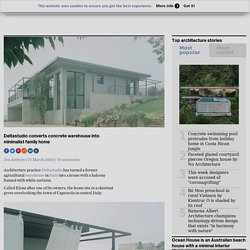 Called Elena after one of its owners, the home sits in a chestnut grove overlooking the town of Caprarola in central Italy. The original warehouse had two storeys connected by an external staircase. "The starting point is a structure designed for agriculture," said Deltastudio. "A rough volume articulated on two levels, warehouse in the basement and laboratory on the upper floor," Deltastudio used this existing division to create spaces for the family who live there, with more private areas for the parents. Bó Mon preschool in rural Vietnam by Kientruc O is shaded by its roof. 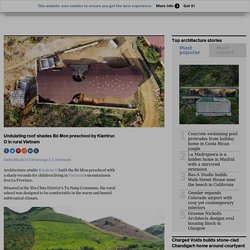 Situated in the Yên Châu District's Tu Nang Commune, the rural school was designed to be comfortable in the warm and humid subtropical climate. Bó Mon preschool is raised slightly off the ground on stilts, in order to catch the most breeze in the valley. Its corrugated bitumen roof curves in a gentle arch over the main school building, with wavy edges that create moving patches of shade down either side of its veranda. "The soft shape of the roof creates a shady area that transits slowly from the wall to the floor as the sun changes its course," said Kientruc O. "It sits among the indefinite mountains and hills, and where it blends itself between the cloud and the smog of a highland afternoon.

" Trees grows up through the floor and through one of the cut-outs in the side of the roof. Photography is by Hoang Le, unless stated otherwise. Art Villa in Playa Hermosa Costa Rica by FormaFatal Design. Three cast-concrete volumes form Preston Hollow house by Specht Architects. American studio Specht Architects has designed this Dallas residence with long corrugated concrete volumes to reference brutalist architecture. 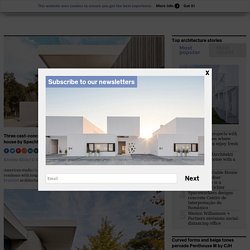 The Preston Hollow home is influenced by the texture and shape of modern Dallas, Texas houses built in the 1950s and 1960s. Its plan is spread across three long cast concrete volumes that comprise 8,826 square feet (820 square metres). Specht Architects oriented each of the orthogonal structures to wrap around courtyards, grassy patches and stone covered patios. 3 alternative sustainable building techniques (that look amazing) My husband and I recently bought a 120-year-old cottage on an island in the Atlantic. 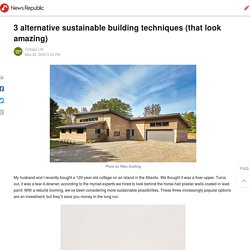 We thought it was a fixer-upper. Turns out, it was a tear-it-downer, according to the myriad experts we hired to look behind the horse-hair plaster walls coated in lead paint. With a rebuild looming, we’ve been considering more sustainable possibilities. These three increasingly popular options are an investment, but they’ll save you money in the long run. Curved forms and beige tones pervade Penthouse M by CJH Studio. CJH Studio ditched gaudy 1980s fixtures to form the calming interiors of this penthouse apartment in Gold Coast, Australia. 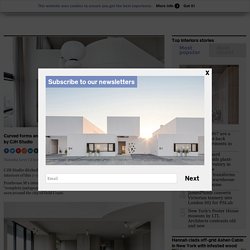 Penthouse M's interior has been designed by CJH Studio to be a "complete juxtaposition" of the typically "ostentatious" homes seen around the city of Gold Coast. As it had gone largely untouched since it was initially built, the two-floor apartment featured a number of dated, 80s-inspired decor details like gold swan-shaped taps and an apricot-coloured bathtub. There were some elements deemed worth saving, particularly the travertine marble flooring that ran throughout the lower living spaces. The studio worked out how to incorporate these into the more timeless fit-out that the new owners wanted. It also wanted to reference other striking features of the apartment building like its curved facade and the glass-brick walls in the lobby. The previously awkward and angular kitchen has been made open-plan. Eight houses designed to show off the owner's car.

The car is the star in each of these eight private residential projects, each designed for a client keen to show off their beloved automobiles. 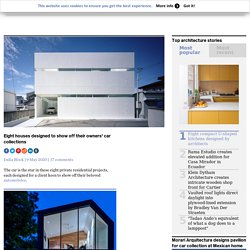 Autohaus, USA, by Matt Fajkus Architecture Built for a car collector in Austin, Texas, Autohaus' entire ground floor is given over to a garage and workshop. Floor-to-ceiling glass walls frame the parking space, and the gabled living area cantilevers over an outdoor parking space to frame and shelter the car below. Stuart Silk Architects Yellowstone House in Madison Mountains, Montana. Stuart Silk Architects are visualizing alpine retreats differently. Instead of a rustic lodge style dwelling, the Yellowstone House in Montana’s Madison Mountain Range has a contemporary aesthetic that is made from industrial style materials. Corten steel, and layered concrete help this home stay well insulated, and tolerant of a harsh climate. A use of natural materials like those from a rustic lodge are represented inside through blackened steel, cedar, and more concrete.

Dezeen. Architecture firm Imbue Design has designed this low-lying off-grid residence on a desolate, grassy lot in Idaho for a family to "distance themselves from social stresses". Boar Shoat was designed for a family looking for an isolated place it could go to as a retreat in Paris, Idaho. Dezeen. Atelier Rua has arranged living spaces in this pared-back Portuguese holiday home around an enormous living room, which has three different vistas of its verdant surroundings. Situated south of Lisbon in the small village of Aldeia do Meco, the one-storey concrete house is shared by a retired Dutch couple. The pair were keen to work with Atelier Rua after seeing the practice's Pensão Agrícola project, a rural hotel in the Portuguese town of Tavira.

They wanted a holiday home with a similarly laid-back feel, where they could while away summer months and have their grown-up children come to stay. "They didn't want doors, and as much as possible, that the plan would be open," Paulo Borralho, partner at the practice, told Dezeen. "They wanted a house that would promote the independence of each bedroom, and that the common spaces could be spaces for gathering. " These are intended to be "family clusters", where respective groups of visiting guests can retreat for privacy.

The Rye Apartments by Tikari Works are covered in red shingles. Rust-red tiles completely cover the facade of these angular apartments in south London, which Tikari Works has designed to have a "sibling relationship" with neighbouring properties. Situated on a corner plot opposite Peckham Rye park, The Rye Apartments consists of two angular, shingled buildings that are host to six and four homes. They take the place of a post-war building and four garages that had fallen into a state of disrepair and subsequently had to be demolished. When it came to designing the new apartments, Bermondsey-based Tikari Works wanted them to be in dialogue with nearby properties, particularly a red-brick Victorian terrace. The studio decided to apply rust-red shingles across the entire exterior of the buildings, including their pointed roofs which feature photovoltaic panels. 6 homes with concierge service. Kailua-Kona, Hawaii. This fully furnished four-bedroom home sits on fairway 11 at Kohanaiki, a 450-acre private club on the Big Island.

James Garvan Architecture adds white gabled screens to Bondi home. James Garvan Architecture has added gabled timber-batten screens to the facade of this house in Sydney, which is meant to mimic the form of a neighbouring property. Urban Cabin is a micro apartment in Italy by Francesca Perani. White concrete house by Matra Architects perches above lakes in Udaipur. Matra Architects has used precast slabs of textured white concrete to clad a house formed of three interconnected pavilions set high above a lake in Udaipur, India. Named K Residence, the house is perched nine metres above Fateh Sagar Lake and was designed to complement its historic surroundings. Ocean House built by architect Rob Mills on Great Ocean Road. Architect Rob Mills has built a weekend retreat beside Australia's Great Ocean Road, with a simple interior that allows the view to take centre stage.

6 beautiful homes built in the 1960s. New Canaan, Connecticut. Marià Castelló designs Ibiza retreat formed of five bright white volumes. Five slim white volumes linked by glass corridors, open patios and a pool form this retreat on the Spanish island of Ibiza, designed by architecture studio Marià Castelló. The home's site is located on the island's San Mateo plain where an undulating wooded landscape is broken up by flat clearings once home to agricultural activities and enclosed by dry stone walls. Called Ca l'Amo – a name given to the plot of land decades ago – the new home sits between two of these existing stone walls. Ancerl Studio separates twin Toronto townhouses with a slender gap. Luxury bathrooms: 22 ways to give your bathroom a spa like feel.