Explorers for Kids. Throughout history people have always wondered what was beyond the next mountain, ocean, river, or even planet. 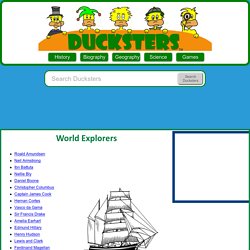 Explorers are people who have blazed the trail in going to new places. The Age of Exploration The Age of Exploration took place between the 15th and 17th centuries. During this time many countries in Europe sent out explorers to discover new lands, find trade routes, seek treasure, and gain territory for their country. During this time much of the world was mapped and many world civilizations came into contact with each other. Why People Explore The reasons for exploration can vary widely. Trade - Many countries and rulers funded explorers in order to find new trade partners and goods. Gold - Often explorers have been in search of riches and treasure. All About Explorers. Christopher Columbus - Ages of Exploration. History - Christopher Columbus. Explorers for Kids: Francisco Pizarro. Biography >> Explorers for KidsOccupation: Conquistador and ExplorerBorn: Around 1474 in Trujillo, SpainDied: June 26, 1541 in Lima, PeruBest known for: Conquering the Inca EmpireBiography: Where did Francisco Pizarro grow up? 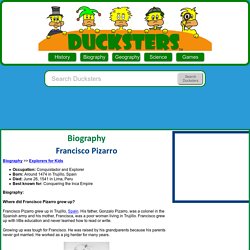 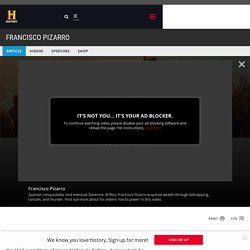 They travelled to Peru in 1526 and then returned to get permission to claim the land for Spain. In 1531, their expedition—which included Pizarro’s three half-brothers—sailed from Panama. The next fall Pizarro entered the city of Cajamarca and took the Inca leader Atahuapla hostage. Despite having paid a ransom to spare his life, Atahuapla was killed in 1533. Explorers for Kids: Ferdinand Magellan. Biography >> Explorers for Kids Ferdinand Magellan by Charles Legrand Occupation: ExplorerBorn: 1480 in PortugalDied: April 27, 1521 in Cebu, PhilippinesBest known for: First to circumnavigate the globeBiography: Ferdinand Magellan led the first expedition to sail all the way around the world. 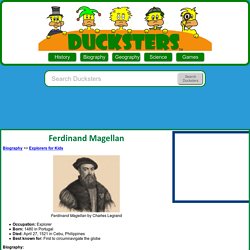 He also discovered a passage from the Atlantic Ocean to the Pacific Ocean that is today called the Straits of Magellan. Growing Up Ferdinand Magellan was born in 1480 in northern Portugal. Magellan had traveled to India by sailing around Africa, but he had the idea that there may be another route by traveling west and around the Americas. Setting Sail In September of 1519 Magellan set sail in his attempt to find another route to Eastern Asia.

They first sailed across the Atlantic and to the Canary Islands. Magellan's ship Victoria by Ortelius Mutiny As Magellan's ships sailed south the weather turned bad and cold. Ferdinand Magellan - Exploration. After more than a month spent traversing the strait, Magellan’s remaining armada emerged in November 1520 to behold a vast ocean before them. 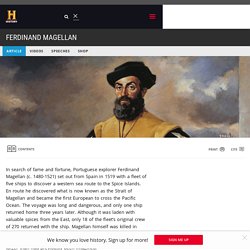 They were the first known Europeans to see the great ocean, which Magellan named Mar Pacifico, the Pacific Ocean, for its apparent peacefulness, a stark contrast to the dangerous waters of the strait from which he had just emerged. In fact, extremely rough waters are not uncommon in the Pacific Ocean, where tsunamis, typhoons and hurricanes have done serious damage to the Pacific Islands and Pacific Rim nations throughout history. Marco Polo - Exploration. Two years later, Niccolò and Maffeo sailed to Acre in present-day Israel, this time with Marco at their side. 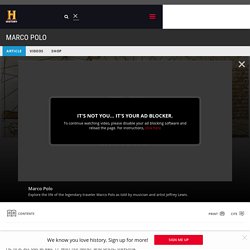 At the request of Kublai Khan, they secured some holy oil from the Church of the Holy Sepulchre in Jerusalem and then backtracked to Acre to pick up gifts, papal documents and two friars from newly elected Pope Gregory X. The friars quickly abandoned the expedition, but the Polos continued on, possibly by camel, to the Persian port city of Hormuz. Failing to find any boats to their liking, they instead took take a series of overland traders’ routes that, in the 19th century, would become known as the Silk Road. Over the next three years they slowly trekked through deserts, high mountain passes and other rough terrain, meeting people of various religions and cultures along the way. Finally, around 1275, they arrived at Kublai Khan’s opulent summer palace at Shangdu, or Xanadu, located about 200 miles northwest of his winter quarters in modern Beijing.

Hernán Cortés: Conqueror of the Aztecs. Hernán Cortés was a Spanish conquistador, or conqueror, best remembered for conquering the Aztec empire in 1521 and claiming Mexico for Spain. 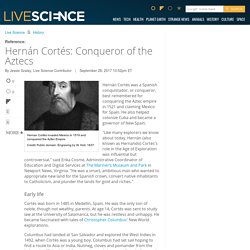 He also helped colonize Cuba and became a governor of New Spain. "Like many explorers we know about today, Hernán (also known as Hernando) Cortés's role in the Age of Exploration was influential but controversial," said Erika Cosme, Administrative Coordinator of Education and Digital Services at The Mariner’s Museum and Park in Newport News, Virginia. Hernando Cortes. IntroductionWith superior firepower, 600 Spaniards, a dozen horses, and thousands of native allies, Hernán Cortés conquered Mexico for Spain. 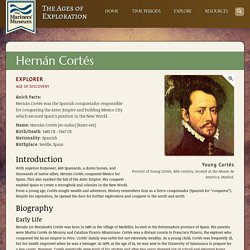 This also marked the fall of the Aztec Empire. His conquest enabled Spain to create a stronghold and colonies in the New World. From a young age, Cortés sought wealth and adventure. History remembers him as a fierce conquistador (Spanish for “conqueror”). Hernan Cortes - Exploration. Cortés became allies with some of the native peoples he encountered, but with others he used deadly force to conquer Mexico. 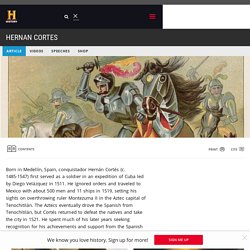 He fought Tlaxacan and Cholula warriors and then set his sights on taking over the Aztec empire. He marched to Tenochitilán, the Aztec capital and home to ruler Montezuma II. Cortés took Montezuma hostage and his soldiers raided the city. Cortés left the city after learning that Spanish troops were coming to arrest him for disobeying orders. He returned to Tenochitilán to find a rebellion in progress. Biography courtesy of BIO.com. History - Hernando Cortés.